When season four ended, there were no more scripts ready to shoot. Writer Brannon Braga said, “We all just looked at the empty script status reports and said ‘how the hell are we going to come up with 26 stories?’ We had some real gems come in from freelancers and a lot of gems came from the staff.” Unlike the series’ first three seasons, this problem did not derail the creative team.

In fact, some of the series’ best episodes were produced this year, including an episode that sits at the top of many Best Of lists. 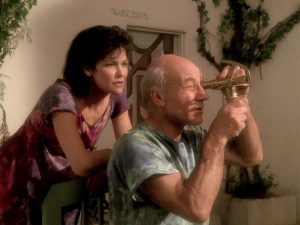 Over The Best of Both Worlds, over Yesterday’s Enterprise, you will often find a single, character-driven episode called “The Inner Light“. It’s cut from similar cloth to the original series episode The Paradise Syndrome, in which Kirk loses his memory and becomes part of another family and culture, even marrying. It’s the episode that Patrick Stewart says gave him his biggest acting challenge for the entire series. It also features the most notable piece of music to come from the show– Picard’s flute theme, composed by Jay Chattaway; the most downloaded piece of music from Star Trek: The Next Generation. Said series writer Naren Shankar, “Shows like ‘The Inner Light’ you can only do in science fiction”

Another favorite? Michael Piller believes, “there is no better Star Trek episode than ‘Darmok.'”

Yet another is the episode “Cause & Effect“, in which the Enterprise is destroyed over and over due to a time loop. Groundhog Day-style stories walk a tightrope. Things must be repeated, but you don’t want to insult or bore your audience in the repeats. The director took care to shoot each re-sequence in a different way; and care was taken with the story as well, to make the resolution plausible without cheating. The writers worked a day or two just to come up with the solution to the time loop.

For the episode “The First Duty,” in which Wesley Crusher struggles with the issue of truth vs. loyalty to one’s friends, Michael Piller and Ron Moore found themselves on opposite sides of the show’s central argument: Moore has said that making Wesley a screw-up was a huge problem for Piller. Piller believed that putting loyalty and one’s word to friends above duty to the truth was a bad message to kids involved with drugs & gangs. But Piller capitalized on that tension, having the debate to enhance the writing, saying “Ron, I want you to fight as hard for your point of view within the context of what Wesley is facing. As Picard, my role, is gonna fight for the truth.” Their debate became the dialogue.

Season five also boasted “Unification,” the highest rated episode since the show’s premiere, and one of the highest in the show’s 7-year history. Denise Crosby had pitched it herself, at least the idea of Tasha Yar’s Romulan daughter showing up. Rick Berman said, “Denise and Wil Wheaton both left the series because they felt that it was time to pursue other (laughs) uh, other creative endeavors. …we wanted them both to stay. They both felt that their careers were hot, and they didn’t want to stay on the show, and I think within less than a year, both of them regretted it.” 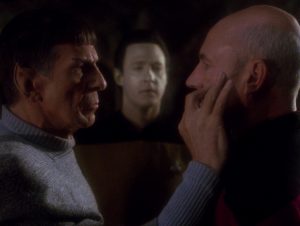 The real key to the episode’s success was the appearance of Leonard Nimoy as Spock. The original series crew film Star Trek VI: The Undiscovered Country was in production; and either its director, Nicholas Meyer, or Paramount, wanted a tie-in. From TNG, Michael Dorn signed on to play Worf’s grandfather in the feature film; From the films came Spock. Michael Piller said that he’d “had very mixed feelings about ‘Unification,’ because there was a great hesitation for the first several years of Next Generation to do anything that might look like we were depending on or exploiting the original Star Trek. It wasn’t that we were turning our backs on it, we just felt that we needed to establish ourselves.”

There’s no question that it paid off, though. A friend and I were working on a spec script at that time (yes, I’m one of those nerds who tried. Thousands did, so, you know, shush.), fully combining both crews. I ran into another friend I hadn’t spoken with in a few years, and in catching up, I mentioned this work. Her eyes lit up, and she was genuinely excited both for us and about the idea. She told me that when her house full of college student ladies had seen the promos for a Next Generation episode featuring Spock; to a one they all said they had to see it, even though none of them watched TNG at all.

Piller wrote the teleplay for “Uniﬁcation II,” the episode which really featured Spock, and he was not happy with his output. “It’s no secret I was disappointed more by my own work on it than anything else. I thought it was an historic opportunity, and I don’t think we delivered on the potential. I remember watching it for the first time cut together and saying, ‘This is dark; it’s ﬂat; who cares? lt’s talky.’ I spent a great deal of time this season going over in my mind how that happened. I‘m a writer who depends a great deal on his instincts. They almost always lead me in a good direction and this time I don’t think they did.” 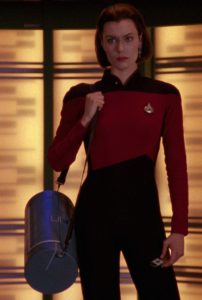 Season five also introduced Ensign Ro- another character, like Dr. Pulaski, who brought some combatitiveness. Brent Spiner said, “I thought she added a lot to the show – we all did, everybody did.” Despite being pretty irascible, a real standout quality in this series, what seemed to make her acceptable to the characters and fans alike was that Guinan embraced her.

Rick Berman noted, “We’re the horse to chase. You take a look at the ratings The Next Generation has been turning out, and you realize we are, right now, the epitome of what syndicated television should and can be, and the goal of what people are after. Obviously all the new shows will be after that, including Deep Space Nine; I think we’re going to be hard to beat, but the right show could come along and do wonderfully.”

For its fifth season, Star Trek: The Next Generation was listed as one of the “most watchable shows” by Viewers For Quality Television. It was more critically acclaimed than ever. In their then annual wrap up, focusing on the 5th year, the often-combative Cinefantastique headlined the section’s keynote article,

Next article Trek Backstory, part 20: Was Season 4 the Best Ever?