“Some people may argue about different times, but I think it was fourth season for me,” said Michael Dorn.

During the third season, the production team still had not felt fully successful; but the cliffhanger got unusual press, great press, so coming into the fourth season, writer Ron Moore said that they finally felt like, “We are Star Trek.” The transition away from alien of the week into character driven shows had fit with the writing staff at the time, and became standard. 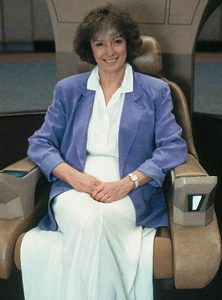 Moore added, “Jeri Taylor came aboard fourth season, and she was a pro. …she gives a lot of latitude, man. You know, a much less forgiving woman would have fired all of us.”

Piller liked Taylor’s maturity. She and Brannon Braga both came aboard not having seen any Star Trek. Roddenberry told Braga not to watch it, while Taylor spent a month going through all of the Trek she had missed. Moore credited TNGs improving quality to the extra time available: “We were able to get ahead on scripts this year. Last year time was short, we were off just ahead of the gun. We had a better handle on it going into the season this year, so we never really got to that scary point where you‘re wetting things madly out on the stage.”

TNG historian, Larry Nemecek, said “The fourth season was the first time Next Generation started a year with a stable writing staff.”

A lessening of insecurity between the two series could be seen in Deforest Kelly touring the TNG sets for Prime Time Live, ABC’s weekly news magazine show. 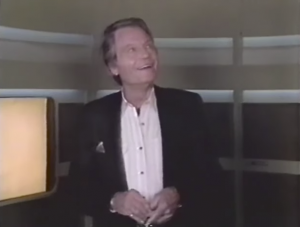 He had initially expected a new Star Trek to fail, but here he offered, “Now you may be asking yourself what I’m often asked, ‘Which show is better, the old or the new?’ …to me, each series stands on its own. Each captures the visions and dreams of its day.” He noted with some pride that the new crew featured a former villain, a teenager on the bridge of the Enterprise, and a blind man running engineering.

Interviewed for the segment, LeVar Burton said, “The message is: you are part of this family, that you do matter, you do count for something. You do have value.”

Season four began with a hit and a problem: “The Best of Both Worlds” had generated a lot of excitement, guaranteeing a great start; but Piller didn’t have a story solution to the unsolvable problem he’d created. As writers go, he seems to be what my friend calls “a pantser.” There are plotters, who have the story mapped out in their heads, and then write it, fleshing it out as they go; and there are pantsers, as in by the seat of your pants. 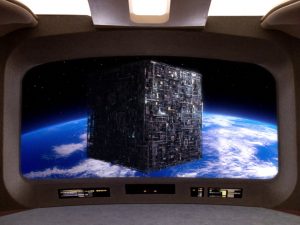 They have characters in mind, or situations, or both, and then they just start writing. This is how Stephen King writes, for example,and it’s what Piller did. “I just didn’t know what it was going to be that would ultimately beat them. In fact, I didn’t discover it until the characters did. I actually like to stand back as a writer and let the characters speak, and listen to them, and I’ll sort of like take notes while they’re talking? …I can remember the smile on my face when I heard that. I said, ‘Oh, that is cool.’ ”

A focus on character marked the fourth year’s shows. “Picard became more human than ever before,” Piller continued. “He was The Indestructable Captain, untouchable, above all risk and danger, and suddenly, in this two-parter, he’s a man who’s been raped, and has to deal, emotionally, with huge consequences… and after that, Picard was more complex, never the same, he was a far more interesting character after that.” 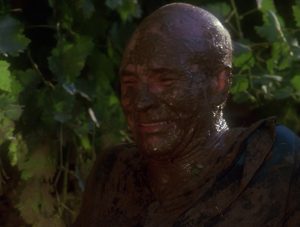 The follow-up episode, effectively part three of “Best of Both Worlds,” was “Family.” It made the next big leap, being an episode that not only acknowledged prior events, but one that had no other purpose. “Michael’s big calling card, just internally, that he wanted to bring to the show, was it’s one thing to do high concept science fiction, but Star Trek‘s got to be about a family,” said Larry Nemecek.

But there were two problems. First, Piller was trying to show people and their flaws, but Roddenberry clung to his utopian vision that people would be past the pettiness seen in the brothers’ conflict. “Gene did not want to do the ‘Family’ story,” said Moore. The other issue was that the writers had always wanted to have more of an ongoing story from week to week, but Berman was still against it.

Piller explained, ”The idea of doing serialized stories was always verboten on Star Trek. It’s a very simple reason, it’s because in syndication, they want flexibility.”

But Moore had already slipped this idea into the series. “The end of ‘Sins of the Father’, where Worf takes it on the chin and decides to accept his dishonor, … it ends with this sense of ‘Oh, my God! This has changed Worf forever, and what’s gonna happen to him next?” Even though the series had never done it, that implied a continuing story, quite deliberately. 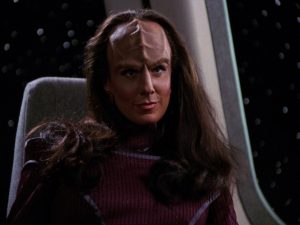 Ultimately, Piller won the battles, leading to an episode considered a high point in the series. “Stories about the family go to the heart of what your franchise is about,” said Piller. This also led to “Reunion“, in which Worf’s mate, fan favorite K’Ehleyr, was permanently removed from the ongoing story. Piller said, “You have regular cast on a television show, and you can’t kill them. You know, the audience knows they’re not going to die. But you can wound them. …That’s how they grow. That’s how they learn, and audiences connect with them when they share the pain that a Worf feels when his wife is killed.”

Michael Piller was noted for what the writing team would call “Piller filler”, new scenes written to fill out an episode. Most weeks, a script would have been written, and experienced people would ‘time’ it, making a good, educated guess about the final running time; but sometimes the directors would bring shows in faster. In one instance, during “Future Imperfect” (in which Riker wakes up fifteen years in the future and has a son), the shooting time on stage was running short. A new scene was needed to bring it up to its 43-minute running time, so writers Carroll and David Carren scrambled to come up with one. 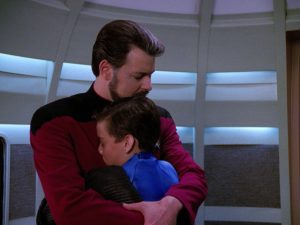 Said Carroll. “We were literally over in Rick Bermans office at about 7:30 at night with Michael [Piller] trying to figure out what we were going to do so they could shoot it the next day. …It ended up being one of our favorite scenes in the episode, between Riker and his son in the turbolift, when he’s talking about his relationship with his own father and how he felt that his father wasn’t there when he needed him, and how he doesn’t want to abandon his own kid.”

“And without that scene,” said Carren, ‘that story doesn’t really work.” These scenes usually made the drama work better.

Iron sharpens iron, and one man sharpens another.
Proverbs 27:17

When the team would break a story, Piller said that “I tell everyone that in this room it is a safe environment and that they are to speak out with whatever ideas they have, even if it‘s stupid or wrong, because it may spark an idea in someone else that leads us to the solution of a particular problem in a script.”

Shankar added, “When you don’t feel afraid to express your opinions, when you really can push every boundary and then just have somebody kind of massage it a little bit, I think that’s how you grow as a writer.”

While the writers in season four were a well gelled team, they were still a group of people from disparate backgrounds, writing stories about moral and ethical issues. Moore said that frequently they would find themselves at odds about what was the right thing to do on a particular issue. They would hash it out, even yell sometimes, though it never got personal. “We would have knock down, drag out arguments about things that didn’t exist.” The internet allowed the writers to also read fan reactions. What impresses me is that the ones the writers pored over came from two people who consistently wrote detailed eviscerations of each episode.

Stewart said, “It cannot be accidental that the episodes that we always found interesting for whatever reason are the ones that time has proved to be interesting for the audiences as well.”

Looking back on the fourth season, Piller said, ”I don‘t think there was one clinker in the whole group. Certainly last year we had some.”

There were some losses during season four. 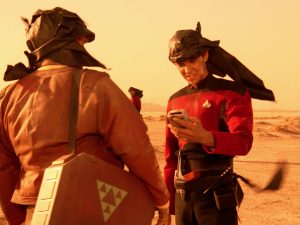 One was Wil Wheaton, who asked to be let out of his contract. “The writing for Wesley was really a bell curve,” he said, “I mean it was awful, and then it was really good, and then it was awful again. …that’s why I asked to be let go. I was pushing buttons and putting the Enterprise into orbit. I was missing incredible acting opportunities, feature film acting opportunities, to do that.”

The final loss, really part of an ongoing one, had to do with Roddenberry’s involvement with the show. Season four was produced from the summer of 1990 through Spring of 1991. Roddenberry would die in October of 1991, but he had already been pulling away from the show. He was still involved in the third season, but by the fourth season his direct involvement was declining. Rick Berman said that he had stepped aside and was not involved with the show for well over a year, almost two years, before he passed.

Previous articleTrek Backstory, part 21: Was Season 5 the Best Ever?

Next article The Tapestry of Star Trek: TNG Part 3