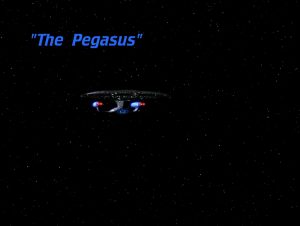 Riker is shocked to his core when his first Captain, now-Admiral Pressman, beams aboard the Enterprise with a mission: to find the ship they served upon together. As they search, racing against Romulans who are seeking to track down the ship as well, it becomes clear that Pressman is hiding something – and Riker knows what it is. When the ship is in trouble and that secret is the only thing that might solve the problem, Riker decides to tell Picard the truth about the existence of an illegal device that could cause a war.

One of the meta-themes of The Next Generation is the truth. “The Drumhead,” “The First Duty,” and “The Chase” all feature the concept prominently, and many other episodes talk about it to different levels. 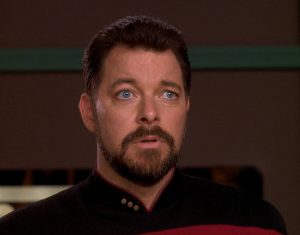 This one tackles the idea of truth by way of lie. Deftly and truthfully directed by LeVar Burton in only his second time in the big chair, this episode is also a finely-crafted tour de force by Jonathan Frakes, whose performance as Riker oozes discomfort and torn loyalties. It also feels like the antithesis of Roddenberry: he famously opposed the idea of a Federation cloaking device, dissent among the crew, and corruption within Starfleet, but it broaches those topics without betraying the characters.

The Truth is weighty enough to change everything. I’m not exaggerating; the placement of this episode in season 7 is telling. Any earlier, and the character development wouldn’t have been enough to sustain the weight of the truth that looms heavily over the Riker and Pressman throughout the episode.

When Admiral Pressman boards the Enterprise, Riker’s previously jovial mood is replaced by a weight: the weight of the Truth.

When the coverup strains at the seams and Picard nears the end of his patience for Riker, their previously friendly relationship strains under the weight of the truth.

When the Enterprise—and the moral fiber of Riker himself—are on the line, the weight of the truth upends Pressman’s career and saves the ship. 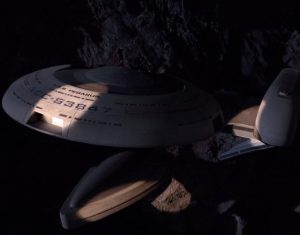 Through the drama of “The Pegasus,” we see the truth about truth itself. Truth is weighty. It’s powerful. It has presence and demands, and it changes everything. When we’re weighed down by the truth, there’s only one option: we have to tell it.

The greater and more critical the truth, the more weighty it is. This is something the writers of the Scripture knew well: their message was the greatest and most critical ever spoken, and the curse for concealing or covering it was painful.

If I say, “I will not mention him,
or speak any more in his name,”
there is in my heart as it were a burning fire
shut up in my bones,
and I am weary with holding it in,
and I cannot.

The weight of the truth, delivered by the Holy Spirit, gave Peter and John the confidence to tell the truth before a hostile crowd:

So they called them and charged them not to speak or teach at all in the name of Jesus. But Peter and John answered them, “Whether it is right in the sight of God to listen to you rather than to God, you must judge, for we cannot but speak of what we have seen and heard.” 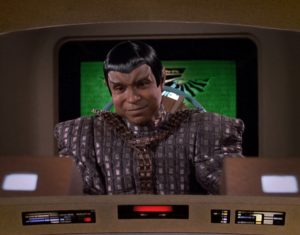 The Romulans’ presence in this episode is interesting in an episode about truth, since they’re so often the platonic ideal of lies. Their secrecy and skulduggery is usually a fascinating foil for the truth of the Federation; but here, it’s taken on a darker twist as the lies and skulduggery have infiltrated the highest level of Starfleet. The Federation, in the absence of the truth, has become the evil that they oppose. The Romulan trademark – the cloaking device – even rests on the deck of the Enterprise. Instead of being a paragon of virtue, the Federation is turning to the shadows. And only the truth can turn it back.

Why do you boast of evil, O mighty man?
The steadfast love of God endures all the day.
Your tongue plots destruction,
like a sharp razor, you worker of deceit.
You love evil more than good,
and lying more than speaking what is right. Selah
You love all words that devour,
O deceitful tongue.

Much as Star Trek would have us believe that the Federation is ruled only by truth, we humans are actually not as bound by the truth as we’d like to believe. We love evil, we love lying; our words devour ourselves and others in our secrecy and deceit. We reject God with our devouring words, and the only antidote is the truth. And it’s not easy. 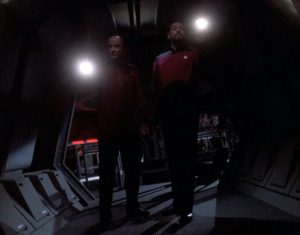 The corruption of the Federation doesn’t start or end with Pressman; it’s in the higher echelons of Starfleet, individuals with power pursuing a course of action that could plunge the galaxy into war. It’s a complex lie, and Riker is told that he must continue the coverup and the lie; he’s pressured by his superior to continue lying. His culture was telling him to stay silent; that the truth would only cause him pain.

He was a murderer from the beginning, not holding to the truth, for there is no truth in him. When he lies, he speaks his native language, for he is a liar and the father of lies.

The truth will always be painful to tell, because the Father of Lies has taught the world how to speak. He’s poisoned their minds, and in the end it will lead only to death.

The only antidote is truth. But how do we discover the truth?

So Jesus said to the Jews who had believed him, “If you abide in my word, you are truly my disciples, and you will know the truth, and the truth will set you free.”

The truth: Christ has come to save sinners. Often painful, the weight of the truth of His Gospel is the only way to freedom.

In fact, it is freedom! Freedom from doubt and deceit and devouring words. So abide in His Truth. Learn His Truth. And speak His Truth!

Thanks for reading Trektember on Redeeming Culture. Mikey Fissel returns tomorrow to talk about the other 99% – the part of the crew who live on the Lower Decks. Join us!

Next article Trek Backstory, part 21: Was Season 5 the Best Ever?

Speaking of admirals: I haven’t exactly counted but I think that, in TNG, we meet more Star Fleet admirals than captains. It seems that whenever an admiral was needed, a new one would be used! Still baffles me – why didn’t they reuse previous admirals more often!

Hmm, that’s an interesting point…I don’t know if I remember seeing anyone other than Nechayev show up more than once. Of course, a few of them were disgraced or otherwise brought down a peg after the episode, but still!