Reel World Theology’s Mark Wingerter returns from the academy to investigate the truth behind Season 5, Episode 19: The First Duty. 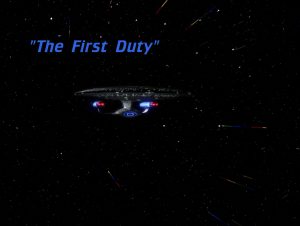 You know that feeling of excitement that bubbles up inside your chest when you get to the best moments of your favorite movie or TV series? That’s me, like, the whole time while watching “The First Duty.” This episode is endlessly re-watchable for me, simply because Captain Picard’s single best moment of the series lies within and the story builds patiently to this crescendo of Picard awesomeness. This is an episode all about truth, and the truth is Captain Picard is the best character ever. (Hey, this is my review, okay?) More importantly, though, truth is central to faith, and what better way to learn about how we live out truth in our lives than through a good ol’ fashion sci-fi mystery?

Suffice to say “The First Duty” is in my TNG Top 25, but due to the sheer volume of quality TNG episodes it’s not surprising that other lists don’t hold it in the same regard. After all, it is a Wesley Crusher episode, and “shut up, Wesley!” is the first thing that comes to mind whenever he is mentioned. 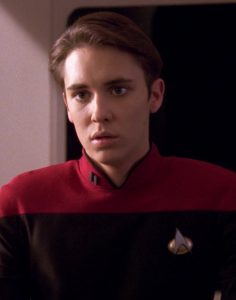 You could say he’s not popular.

But seeing him make a colossal mistake that gets a team member killed is perhaps the most humanizing moment we get for the wonder kid who had no formal training, yet always seemed he could fly the Enterprise better than its officers. For all the sticky wickets he helped our beloved Federation flagship get out of, he never got a chance to connect with the fans because he always seemed a bit too perfect. Here, he’s brought down to earth.

The episode works as a perfect counterpart to the last time we saw Wesley, which was in the season four episode “Final Mission.” There, he literally saved Picard’s life; here, Picard saves Wesley’s career. And boy did he need it. The uniquely gifted Wesley is, of course, at the top of his class and a member of the most elite flight squadron in Starfleet Academy. Except we find out that he’s made the mistake of following squad leader Nicholas Locarno as blindly as the rest of their team. Not only that, but Locarno has driven Wesley and the team to follow him into a cover up of the accidental death of one of their teammates. (What?! Not the golden son Wesley Crusher!) Once Picard finds out what really happened, thanks to Data and Geordi, he ain’t havin’ none of that. 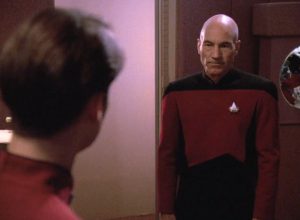 Picard: The first duty of every Starfleet officer is to the truth, whether it’s scientific truth or historical truth or personal truth! It is the guiding principle on which Starfleet is based, and if you can’t find it within yourself to stand up and tell the truth about what happened, you don’t deserve to wear that uniform.

Verbal smack down, warp nine, engage! Picard’s righteous anger was always so… righteous! This lecture had enough force to knock Wesley back in time further than even the Traveler could take him. But to be fair, this isn’t Picard giving just another tongue lashing to a pretentious Cardassian; No, this is a father figure doing his best to right the course of a straying son. That’s why it’s so great. You can clearly see Picard taking no delight in the lashing he knows Wesley needs. His surprise and disappointment when Wesley refuses to answer him is palpable. But he is no less firm and its for good reason. According to his conversations with Boothby, the Academy’s groundskeeper, Picard was once in the same situation. 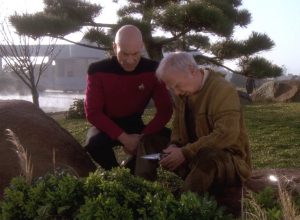 That’s right, Picard was a hellraiser of a youth. Just watch the episode “Tapestry” for proof. He was saved from expulsion through his own father figure Boothby, so he knows the value of training a child in the way he should go. No matter what it takes.

And that’s the heart of the lesson. Truth is not always easy, but we are called to live it out. We think of truth as a concept, but when you see truth mentioned in the Bible, it is often treated as a process- something to practice, to walk through (see Philippians 4:8 for example). Jesus is the truth, and to fulfill it he had to live and die and rise again. There was a great deal of pain in that process, and a great deal of doubters along the way, but that’s the great thing about truth…it’s true no matter if you believe it or not. 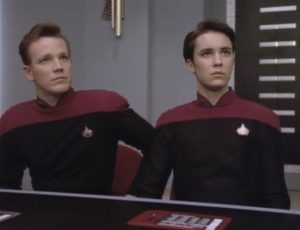 That brings me to Nicholas Locarno. I’ve known a Locarno or two in my life; slick-talking, got it all together, nothing out of place. They’re the Webster’s dictionary definition of “holier than thou.” (Don’t look that up). Thing is, the most dangerous Locarnos are not so in-your-face with their idea of truth; they’re nuanced. How many Christians have you heard tout the “team” as more important than the individual? High profile “leaders” in the church do this all the time and play a political game that marginalizes people for gain. Jesus hung out with the disenfranchised, the poor, the hurting, the sick. Pretty sure He values the individual. Living out the truth looks like Jesus, engaging the brokenness and pain, not trying to shiny it up. That’s true whether some want to live it or not.

Wesley ultimately chooses to live out truth, knowing the cost to him and his teammates. What drives The First Duty home for me is the redemption in the end, because sometimes wading through the pain of the truth can have a happy ending. In fact, Wesley’s teammate Sito Jaxa gets her shot at redemption in the season seven episode “Lower Decks.”

Overall, this episode is just great Trek. I wish they would have left Wesley’s story here: Picard sending him off to a more hopeful future is as great of a story cap as any. I think the episode leaves us with a similar hope and a realistic example of what living out truth can look like. It doesn’t sugar coat it, trivialize it for cheap drama, or over-explain it with trite platitudes. “The First Duty” shows us truth in action as only Picard and crew can do.

Thank you for reading Redeeming Culture!  Come back tomorrow as David Lichty escapes from the collective to tell us about I, Borg.

Mark Wingerter is a writer and filmmaker from Greensboro, NC. He is also in the middle of another series about Star Trek: The Next Generation on Reel World Theology and can be heard, along with David and Mikey, on the TNG episode of that podcast. He is analytical, perhaps too much so, and therefore must share his opinion in a variety of creative outlets. He is very thankful for those who put up with it, most of all his wife, Sarah. You can feed that addiction by following him on Twitter at @MarkWingdinger.

“How many Christians have you heard tout the “team” as more important than the individual?”

I appreciate your saying that. Whether it’s sinister, or merely a knee-jerk response to often seeing genuine needs on the other side, it remains unfortunate that Team Over Individual tends to get presented as a universal good. That approach weakens the argument that it might ever be right when one is in a situation where it so clearly isn’t.