If you’re feeling a little bit of déjà vu, that’s because David Atwell (from right here at Redeeming Culture) is reviewing Season 5, Episode 18: Cause and Effect today. 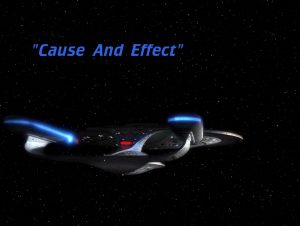 Have you ever felt like you were going in circles about something? Like no matter what you try, or how hard you work, you just end up back where you started?

Maybe there’s some besetting sin in your life. Maybe you don’t feel like you have any control over your temptation. Maybe every time you say you won’t sin that way anymore, you still inevitably end up typing that sweet, sweet gossip out on Facebook or shouting at your friends for imagined slights. Maybe you still seek out questionable content on the internet, or cheat and steal without thinking, or lie about that one little thing that really shouldn’t matter, but you just can’t stop—

This is getting a bit out of control. Let’s start over.

Have you ever felt like you were going in circles about something? Like no matter what you try, or how hard you work, you just end up back where you started?

This episode has probably the best cold open in Star Trek history: the Enterprise is in trouble, venting things it shouldn’t be venting. On the bridge, the crew frantically tries to regain control, but it’s no use. An explosion sends them spinning out of control, and before Picard can even finish giving the order to abandon ship, the ship blows up in a massive fireball. 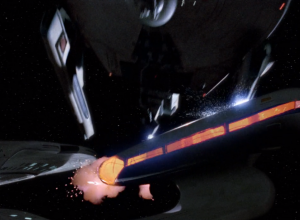 If a cold open is supposed to get you to keep watching, this one sure does the trick.

The Enterprise crew is trapped in a time loop, unbeknownst to them until the déjà vu becomes too strong to ignore – and always ending in the destruction of the Enterprise, as we saw in the teaser; the result of an accidental wreck with a 90-year-old starship called the Bozeman emerging from a time distortion. After several loops, they finally figure out how to send a message to the next one; and in that next one, Data is able to use that information to avert the galactic fender-bender, saving both the Enterprise and the Bozeman. 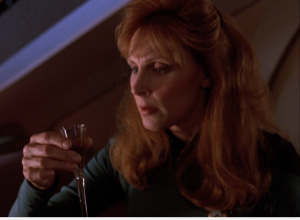 There’s a certain inevitability in the episode that’s fairly striking; and most of it is caught up in Dr. Crusher’s reaction to the unusual events and sensations. She’s the first to notice the feeling of déjà vu, and after a few loops, it even begins to cause dread within her as the feeling of inevitability grows. It’s never a good thing to repeat the past, and it certainly isn’t comfortable. This shouldn’t be a surprise to us; déjà vu is an uneasy feeling at best, and the feeling of being stuck in a rut is something everyone encounters. It’s even worse when the cause of your rut is a sin that will destroy you.

In every repetition, they know a little bit more about the temporal causality loop; they begin to work out the problem, establishing systems and mindsets in an attempt to break the cycle. Even so, Crusher inevitably breaks her wine glass every time. The ship always loses power when encountering the Bozeman. And the Enterprise is always lost with all hands before the poker game begins again.

All of that…until they can finally remember the past.

When the crew finally realizes what’s going on, La Forge immediately comes up with the only solution: they have to be able to communicate with their future selves if they’re going to break out of the causality loop. Without knowing what they’ve already tried, they’ll just keep failing with the same ineffective plans that got them killed the previous time. Picard and Riker lay out the problem succinctly in the conference room:

WORF: Maybe we should reverse course.
RIKER: For all we know, reversing course may be what leads us into the crash.
PICARD: No. We can’t afford to start second guessing ourselves. We’ll stay on this course until we have reason to change it.

Without knowing where we’ve been and what we’ve done, our best efforts to escape sin are just a repeated mistake; something that sends us into a tailspin of guilt and regret before it destroys us. 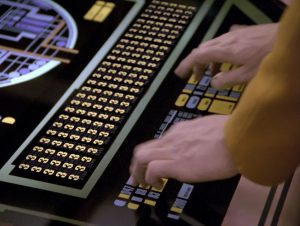 La Forge has an idea: a device that will allow Data to send a message to himself in the next loop. A single word that will make all the difference.

What word would you choose?

The message of the Gospel is a word. It really all comes down to a single word, in fact: grace. The grace of Jesus to pay for our sin and to rescue us from the endless, freewheeling cycle of sin and death. Jesus spoke it to us before the first cycle, and the simple way to get out of it is just to hear that word again. We don’t have a particle accelerator on our arm, but we do have the Scripture; it speaks to us from the past, showing us where we’ve been and who we’ve been called to be. The change caused by hearing His word over and over again is called sanctification.

It’s not a quick process; the crew of the Enterprise spent 17.4 days in their time loop before escaping, but your sanctification will take you your entire life. The evil parts of us are still there, below the surface; unsanctified and prone to sin. It’ll take longer than you like. But escaping is worth the wait.

Sin is a time loop that tells you you’re never getting out. Even abandoning ship doesn’t seem like an option. But God speaks to us from the past and the future: I love you. I’m sanctifying you. I’ve poured my grace out on you. As He transforms us into the image of Christ, we start hearing His word and even seeing Him in places we never expected: the things we watch, the words we hear, even the mirror on our best days. But that’s not us. That’s Him. Every loop, He speaks to you; drawing your heart to Himself, giving you new insight to fight that old sin, and showing you where He loves you so that you can escape the destruction of sin that’s lurking just ahead of you. Sometimes you fail anyway; but He picks you up and keeps on sanctifying you, and He’ll keep doing it until you’re perfect.

The good news is, you aren’t the Enterprise. You don’t have to do it yourself. You’re the Bozeman; helpless, trapped for eternity in a situation out of your control or comprehension, facing the reality of death over and over and over again—unless someone else interferes. Rejoice! Christ doesn’t demand we work harder. He rescues us Himself with a single word.

Thank you for reading Redeeming Culture!  If you can’t find it within yourself to come back tomorrow for Mark Wingerter’s look at The First Duty, you don’t deserve to wear that uniform.

Next article Trek Backstory, part 12 - Finishing the Year and Engaging with Fans