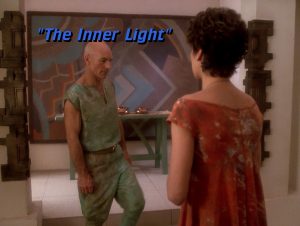 The toughest part about reviewing “The Inner Light” is the fact that it has already been written about extensively. It religiously finds itself near the top of both fans’ and critics’ essential Next Generation episode lists. It is universally pointed to as one of the best episodes the series ever produced. But then again, during Trektember, you’re going to be reading a great deal about a lot of really good episodes. So, what is it about “The Inner Light” that makes it deserving of such recognition? 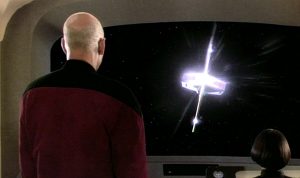 The episode begins with the crew coming across a probe that seems innocuous enough. However, once engaged, it scans the Enterprise and a beam penetrates the ship and puts Captain Picard into a coma-like state. While in this state, Picard appears to have been transported to another world called Kataan, where he is known to the locals as an “iron weaver” named Kamin. He’s just been awoken from a fever by an unfamiliar woman named Eline, who identifies herself as his wife. So no Romulans, no Borg, no space battles, just Picard exploring a life out of time, now as a man named Kamin. It almost sounds like it’d be boring…but this is Star Trek, so we know better.

I think the beauty of “The Inner Light” hinges on a few key elements. Unsurprisingly, those elements are on display in many of The Next Generation’s best episodes. For a TV series about exploring space, and cool starships, and imaginative alien races, it is at it’s best when it actually explores humanity itself. This means a reliance on personal story and strong characters; and I think it’s safe to say that Picard is one of the strongest characters in all of Star Trek.

In a panel discussion about this episode at the 2017 Star Trek Convention, Patrick Stewart (Picard) points out (in as careful way as is possible to a room full of Trekkies) that there were not often a lot of episodes that really stretched or challenged the actors themselves. “The Inner Light,” Stewart admits, was one such episode for him. He talks about how difficult it was to embody a character who is slowly losing his old self and embracing his new apparent reality. Of course he nails it because he’s Patrick Stewart, but the episode also sucks you into the struggle by moving Picard (or Kamin) through a long passage of time.

Honestly, this is probably one of the most beloved episodes because, thematically, it’s deep. You get gems from Picard about how we should “live now” and “make now always the most precious time.” We also get an entire civilization, the Ressikans, that long to preserve its history. Heck, we even get what, on the surface, seems like a tale of regret; but I think there’s something more fundamental that we connect with.

ELINE: Was your life there so much better than this? So much more gratifying, so much more fulfilling, that you cling to it with such stubbornness?
PICARD/KAMIN: Eline…
ELINE: It must have been extraordinary. But never in all the stories you’ve told me…have you mentioned anyone who loved you as I do. 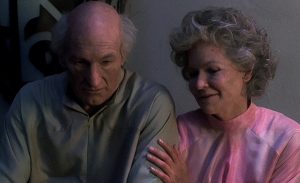 I still believe that these words from Eline are the turning point of the episode. Picard now finds himself immersed in the life that was (or technically is, but in a different reality). He doesn’t understand how he has gotten to this new reality, but he is not invested in it. Somewhere in his youth, he determined what a fulfilling life consisted of. It would be no stretch to assume that, for Picard, that true contentment stems from a unwavering sense of duty above all else. But that wasn’t the life of Kamin, this new persona. This new life was small. It was quiet. Compared to his other life, it was rather boring. But it was also different– vastly different than the one he had been living. This life was rooted in love– in simplicity. The kind of life that could only disappoint a starship captain…at first.

KAMIN/PICARD: “I always believed that I didn’t need children to complete my life. Now I couldn’t imagine life without them.”

When he begins to live his new life, Picard opens himself up to something we so very rarely see in TNG; love. Picard, as Kamin, is a story of a life well-lived—a life that didn’t require intergalactic diplomacy or photon torpedoes. It was a life that Eugene Peterson might refer to as “a long obedience in the same direction.” He loves his wife and begins to care for her above himself. He serves his community. He loves his children. He tries to impart wisdom to future generations. It’s even more noteworthy when you recall than Kamin’s son, Batai, is played by Patrick Stewart’s own son, Daniel Stewart. 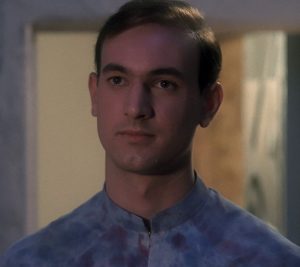 Imagine that. Captain Jean-Luc Picard with kids? His discomfort is so well known that it is used as cringe-comedy in some episodes, while his other best available father moments seem to be lecturing Wesley Crusher. But here he is, a father; concerned, involved, loving. How could this be fulfilling to a starship captain?

It reminds me of a beautiful scene from C.S. Lewis’ The Great Divorce where a patron of Hell is visiting Heaven and comes across a woman who was surrounded by dancers, singers, and musicians in celebration. It is such a spectacle, the visitor asks his guide who she is:

“Is it?…is it?” I whispered to my guide.
“Not at all,” said he. “It’s someone ye’ll never have heard of. Her name on earth was Sarah Smith and she lived at Golders Green.”
“She seems to be…well, a person of particular importance?”
“Aye. She is one of the great ones. Ye have heard that fame in this country and fame on Earth are two quite different things.”

This is the very type of life we watch Star Trek to avoid. We, as humans, want to live a big life. We want to be famous, or popular, or rich, or influential, or “heard of.” We want to have power over our lives and our surroundings. We don’t want to take out the trash. We don’t want to pick up eggs and milk for our spouse or attend another child’s recital. We want to be starship captains on the front lines of galactic exploration. You know what? Some people are destined to be “starship captains.” God calls all kinds of people to all types of things. But most people aren’t; most people are Kamin. Most people are Sarah Smith, tasked with deeply loving those whom God has put in their lives. Loving them recklessly. Loving them honestly— with the love and acceptence of Christ.

Now, it would be foolish of me to try to pretend that Captain Picard was transformed by Christ’s love in this episode. I would not try to co-opt this episode in that way. What I can say, however, is that, as Christians, we believe that love is transformative. We believe that love is important. We also believe that love is worth our time. There is joy in that—real joy. The joy a man can get from raising children, or serving his community, or loving his wife. You know, the things you don’t get a parade for. This isn’t a plea to live a small life, but a call to realize that “fame in this country and fame on Earth are two quite different things,” and you don’t need a starship to live life well. 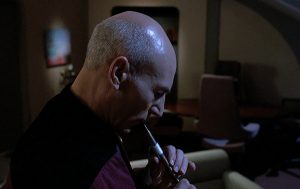 At the end of the episode, we see Picard alone in his quarters contemplating all he had experienced. His hands fumble with a small flute, his skill with which we watched grow as he aged in his life as Kamin. When he plays the tune he had been practicing for decades on Kataan, we begin to realize that, the whole time, the beating heart of “The Inner Light” is a life of joy.

Thank you for reading Redeeming Culture!  Tomorrow, we visit another friend from the past as we go digging for some Relics.