Star Trek: The Next Generation is thirty years old this month!  To celebrate, Redeeming Culture is assembling the finest crew of culture redeemers from all over the internet to investigate the spiritual harmonies in this cornerstone of science fiction.
For more about Trektember, read our preview post.  Please note that there are minor plot spoilers for this episode below.

Redeeming Culture regular David Lichty moves us along with season 3, episode 15: Yesterday’s Enterprise. Read on, stranger, this is a great one. 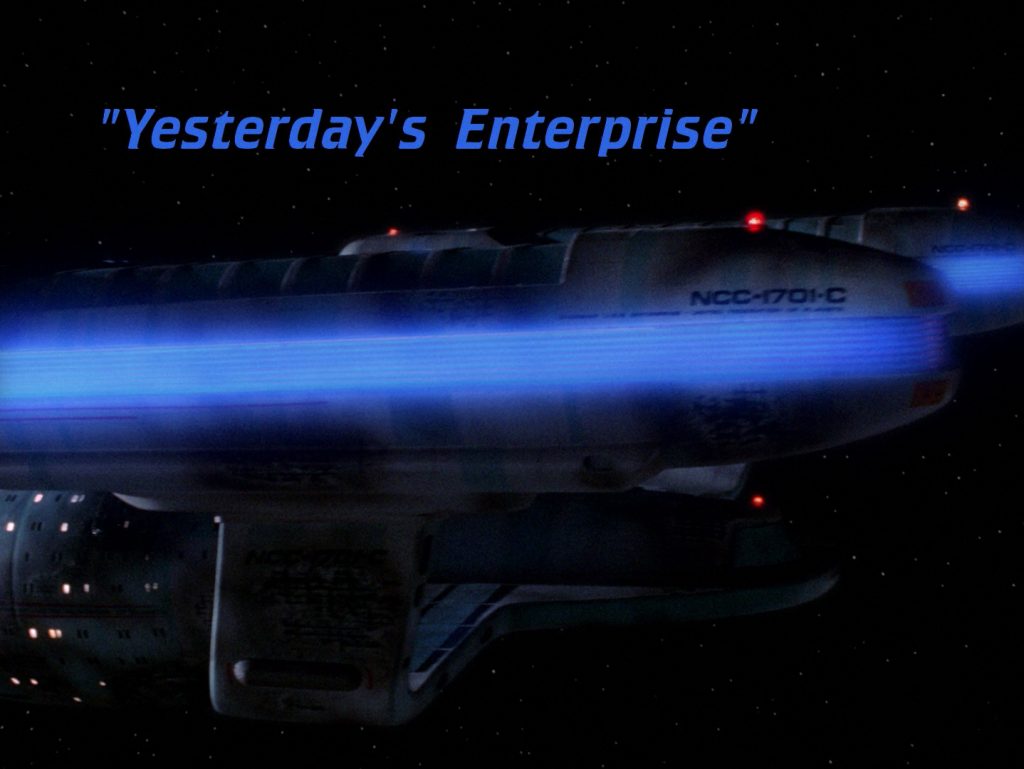 Out of nowhere, the decades-old Enterprise-C (our show takes place on the Enterprise-D) appears through a time vortex, having travelled from 20 years in the past. Immediately, almost everything about our show changes: The Enterprise is a battle cruiser, dimly lit in blues instead of the usual bright whites. The Federation is losing a long, open war with the Klingons. Picard and Riker have shorter tempers and a strained relationship. Troi and Worf are not on the bridge, but—perhaps most shockingly of all, after her death two years before—Tasha Yar is. 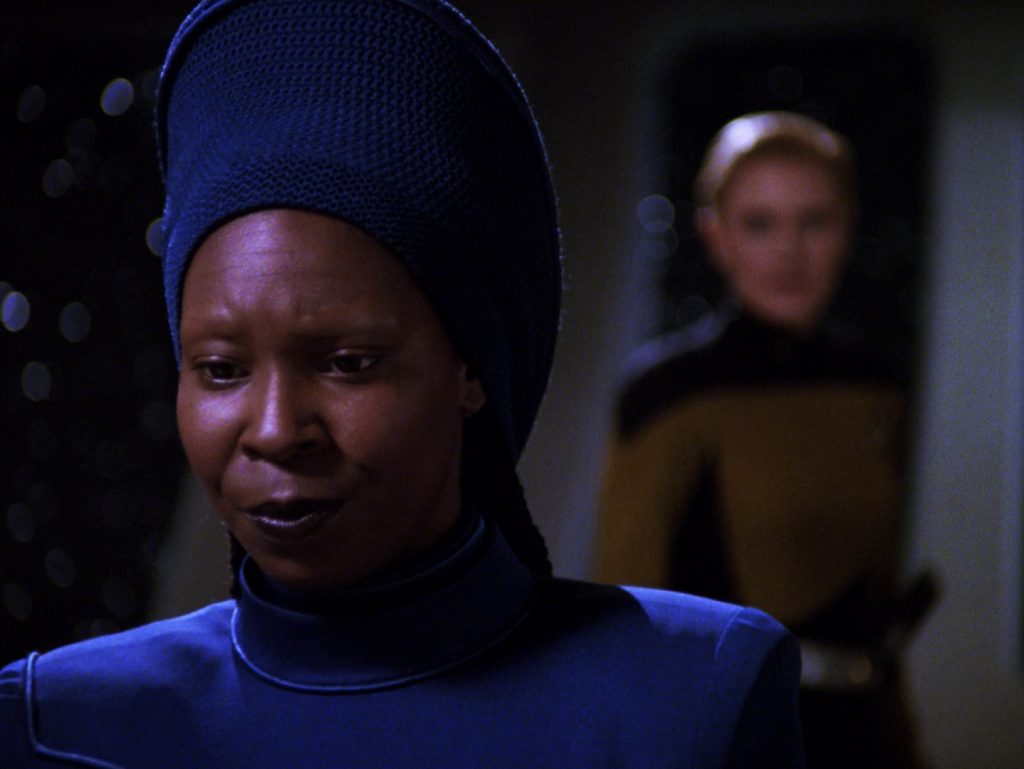 The D takes aboard some of the crew of the C. That ship is battered, having almost been destroyed while trying to rescue a Klingon outpost from a Romulan attack. The mysterious Guinan senses that things are wrong; she tells Picard that the ship needs to go back, and also tells Tasha that she is supposed to be dead, slaughtered meaninglessly two years prior.

While he thinks that the Federation needs every ship it can get for the war effort, even one as out of date as the C, Picard is moved to change his mind by his trust in his friend Guinan; as well as by the logic that a Federation vessel which perished defending Klingons would have gone a long way with a race so focused on honor, perhaps even preventing their current war altogether. He agrees that the C must go back. Fortunately, the crew of the C do as well, and Tasha is given permission to join them. The C re-enters the time vortex, and all returns to normal. In the final scene, Guinan asks Geordi to tell her about Tasha Yar, since in this reality, she never met the first security chief.

Why did I choose it?

I have a lot of respect for the original series episode The Immunity Syndrome, an average-concept episode made great because the characters are so affecting.

I’m less moved by the big ideas than I am by the great execution. Moments matter more than metaphors; I’d rather see a well-dramatized episode with a silly premise than a by-the-numbers episode with a brilliant idea behind it. Episodes like Darmok are not presently* among my favorites, as they are for many, for just that reason. Well, Yesterday’s Enterprise shines on the execution front. Are there ideas? Sure there are ideas. Are they worthy? Yeah, why not. But in this case, that’s the icing, and everything else is the cake. 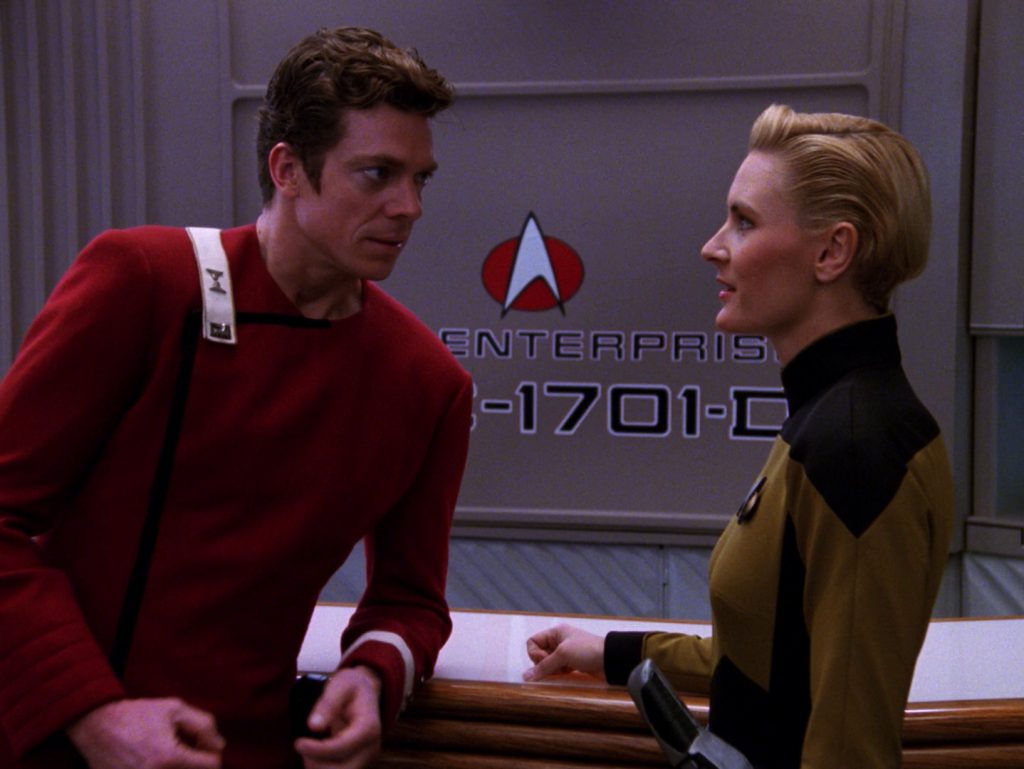 As a production, Yesterday’s Enterprise exemplifies how all excellent work glorifies God: Despite being created during an infamously bad time for the TNG writers, they worked it out as a team. Great care was taken in the production of the episode as well, working with the actors to create a believable alternate universe; and shooting more cinematically than televisually, allowing for more natural-feeling scenes and believable relationships.

“…walk in a manner worthy of the calling to which you have been called…” Ephesians 4:1 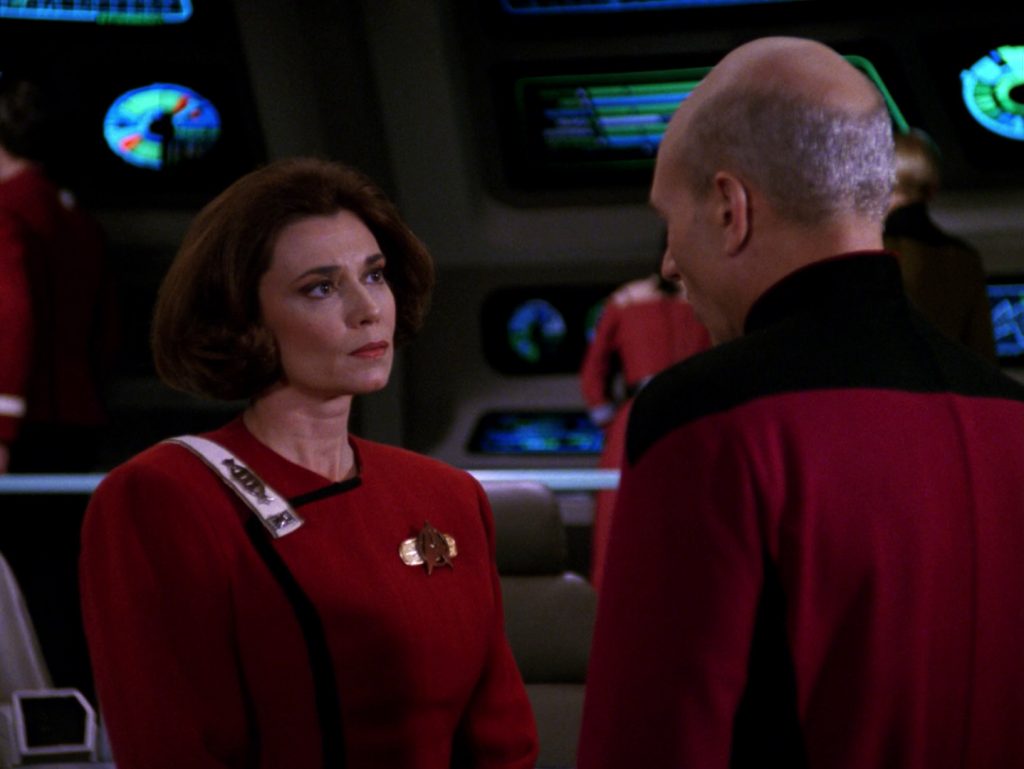 The acting is above standard across the board, by newcomers, returning favorites, and cast regulars alike. The C feels like a ship with its own series worth of back history, much like the two crews we met briefly at the beginning of the movie Star Trek IV (The One With the Whales). Tricia O’Neil deserves special call-out as the C’s Captain, Rachel Garrett. She felt like a Captain the moment she spoke. She could have been portrayed as overly suspicious of Picard, or just unsure of her circumstances. Instead, she understands her place in his situation just as well as he understands her place in his world.

“You and the people with you will certainly wear yourselves out, for the thing is too heavy for you. You are not able to do it alone… look for able men from all the people… “ Exodus 18:18, 21a (ESV)

Castillo could have been attractive, but otherwise wooden. They went past that. Additionally, Denise Crosby stepped back into the role of Tasha as if she’d never left, and the cast TNG all worked really well together, according to the director. Adding to the efforts, Yesterday’s Enterprise had the biggest battle sequences they had done for quite a while, and it had the kind of scoring that usually doesn’t work – telling us how to feel. That’s usually a mistake, but in this case I think it’s more confirming to us what we think we’re seeing, rather than informing us directly. It’s conveying, “Yup, that’s Tasha, and yes, it’s as big of a deal as you think it is!”

“…good deeds are obvious, and even those that are not obvious cannot remain hidden forever.” 1 Timothy 5:25b (NIV) 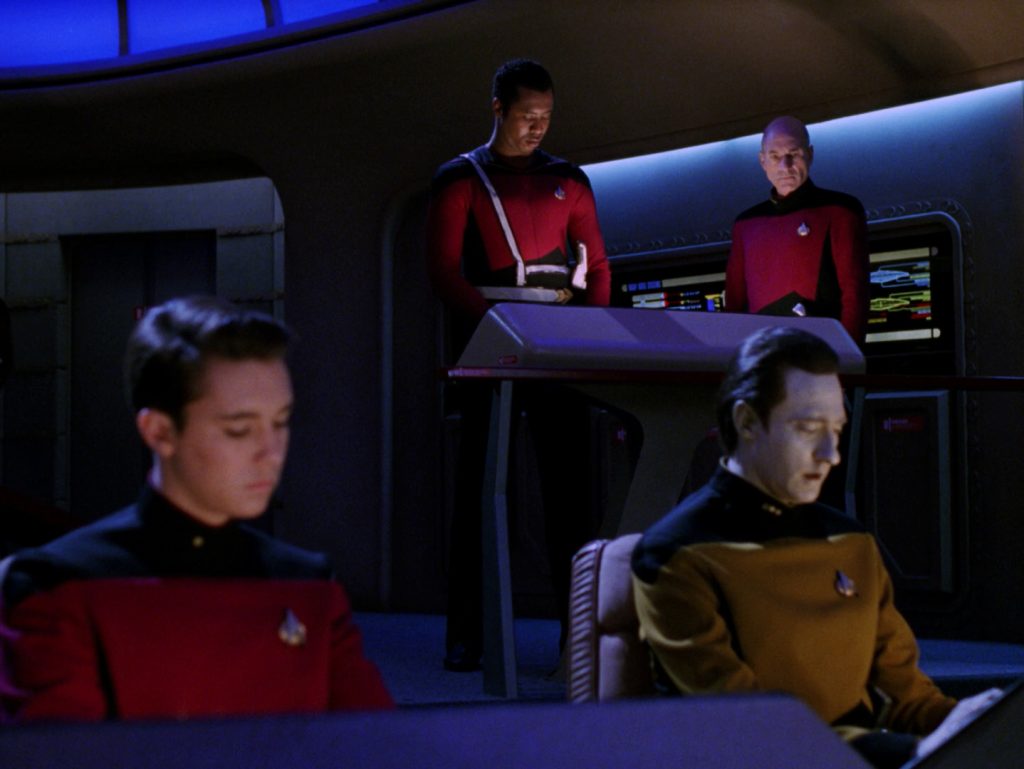 The creative team on TNG couldn’t always tell ahead of airdate which episodes were going to knock it out of the park. Upon seeing the dailies with the darker bridge, it occurred to writer Ron Moore that somebody had seen value in this story and spent money on it. The costumes, production designs, and extra cast all pointed to a big budget.

One of those people was art director Michael Okuda, who said, “This episode killed us”—but even he didn’t understand the value of the work until he saw the rough cut. Christopher MacDonald (Castillo) has talked about how amazed he is that so many people come up to talk with him about this one character he played one time, in one episode of one of many shows in which he’d appeared.

There are plenty of scriptures about work that speak to the Christian specifically, but this was not a specifically Christian endeavor. And yet God’s reality still shows itself to be true.

Those are things I see in how the episode was produced, and the outcomes of God’s common grace. What about the story itself?

A Story of Presence

I’m led to the theme of presence, coming from the quality of the show, especially in its details. This distinguishes more than a few of TNG’s best episodes. 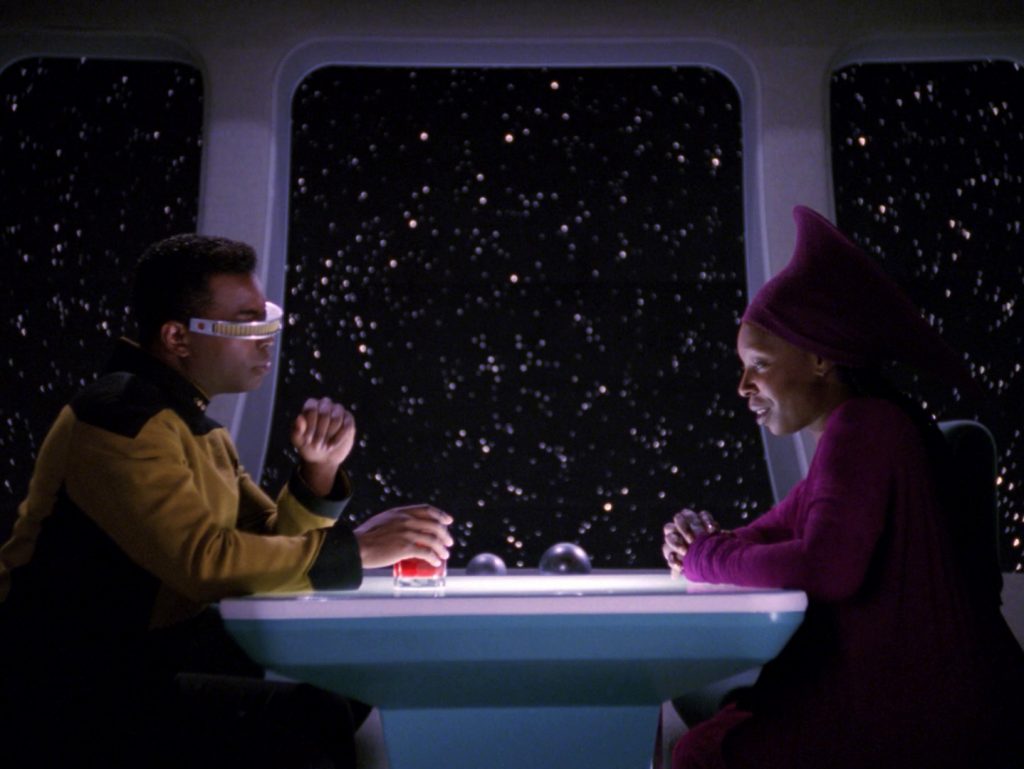 At the very end of the show, Guinan asks Geordi to “Tell me about Tasha Yar.” People matter. Individuals matter. Even when we know that the crew of the Enterprise C, and Tasha, are going to leave the show and die off screen, we remain invested in them. Yesterday’s Enterprise doesn’t fall prey to the liabilities of the “It was all a dream” plot point. The events of this entire episode get completely undone by the ending, and yet they matter. This is because all of the effort put into this episode lets us feel present, and lets things matter, regardless of the ends to which they will lead.

On that note, writer Ira Stephen Behr says that Guinan’s line to Tasha, “You died a meaningless death,” in a way really called out the show itself. Moore was surprised anybody let that go through, but at the time, it really was the general consensus about the way Tasha had died. They had blown her off. One of the rewards of this episode is how well it turns that around for Tasha Yar as a character of value. Her death on the Enterprise-C, and how she deliberately faces it to help bring about the needed good, redeems her previous death.

One more thing about Yesterday’s Enterprise. What if everything we think is true or right isn’t? What if what we experience is a distortion of what should be? Is there even a ‘should be’? Picard’s primary reason for going along with Guinan is his trust in her, but underlying it is the idea that the war they’re losing could have been prevented before it started. Their lines are said as if it’s a given that that’s a better situation, the one without the war.

We live in a ‘what-shouldn’t-be’ world. We know that things are wrong. They’re not just other than what we would prefer, but actually wrong.

In many ways, we live in a ‘what-shouldn’t-be’ world. We know that things are wrong. They’re not just other than what we would prefer, but actually wrong. That indicates that there is a right way things should be, an objectively right way, not one of mere opinion. In Yesterday’s Enterprise, Picard weighed that into his decision. And it took death to fix it, just like it did in our broken world. The writers weren’t setting about to import the Gospel into their story, but they sure did smack into it.

And yet, the decision about sending the C back is not made capriciously. Our (alternate) TNG crew are dealing with a ship that passed out of its own time from a moment relevant to their situation. There is strong evidence that a wrong exists which could be righted. What needs to be done is, at the very least, likely to matter much as Guinan says it would. It’s not a leap in the dark, so much as a leap of trust, founded by Picard’s well established personal trust of Guinan, and solid, applicable knowledge of the situation.

This is the kind of trust, usually termed faith, we are to have in our savior, our God. And it’s a faith that we can be confident in – because, like the Enterprise-C crew, we’ve seen the future. And we know that His sacrifice was not in vain.

Thank you for reading Redeeming Culture!  Trektember returns tomorrow with The Offspring. We hope to see you then.

* I qualified that Darmok comment with ‘presently’ because as I returned to these shows after some time, with their new, frankly gorgeous looks, some episodes I had previously appreciated less than others rose for me. I’d hoped that would happen with Darmok, when I rewatched it before Reed Lackey’s coverage post later this month. It did. Darmok is a lovely episode.

Next article Trek Backstory, part 5 - Casting The Next Generation