Today, David Atwell takes us on The Chase in season 6, episode 20. 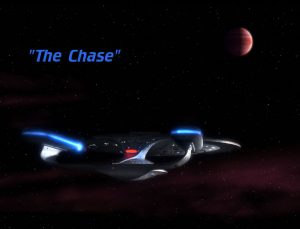 One of the curious things about The Next Generation is how the show- invented by a secular humanist, in a seemingly-post-faith future, which turns its back on anything not firmly rooted in science and reason- how it nevertheless grasps at things so Christian, so eternal as the nature of (a) God, the value of the individual, and – in the case of “The Chase” – the need to pursue the truth about our identity at all costs.

It’s episodes like this one which inspired Trektember in the first place.

Reunited with his old mentor for the first time in decades, Picard is forced to again turn down his offer to seek the greatest historical find of all time. The Professor leaves the Enterprise in a huff; and when the Enterprise arrives too late to respond to his distress call, Picard devotes his ship and crew to finishing the Professor’s research – research which will put them toe-to-toe with the Cardassians, Klingons, and Romulans in a race to discover a message as old as life itself: that all life in the galaxy was seeded by one ancient race, meaning that even the most bitter rivals in the Star Trek universe are distant cousins.

This isn’t the best episode in the series (though it may be the most faithful to Roddenberry’s concept for it). Still, I think it’s got some of the most sweeping implications. 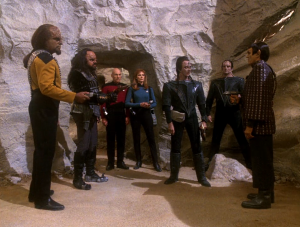 When the four races of The Chase first discover the message hidden in their bones, they immediately assume its transcendence. They each imagine that the message, once deciphered, will give them insight into the value they hold most dear: the Klingons assume that it will give them an unbeatable weapon, the Cardassians expect unsurpassed power, the Romulans are hoping for the most sublime spy intelligence ever uncovered, and the Federation hope for some data providing scientific and historical truth they’ve never seen before.

But they all presume that the program will eventually reveal to them something they’d never had a grasp on before, just because it was ancient. We’re hard-wired to recognize ancient words as important, because the echo of God’s voice saying “Let there be light” has resounded across time and into our own hearts. The Bible is His ancient word to us; and since He’s been saying the same things to us ever since, the ancient words we hear sound like His voice.

None of the races in “The Chase” are fully correct, though none of them are fully wrong. The true contents of the message could provide a weapon, a source of power and strength, a secret to be exposed, and a wealth of truth. And what could do all of these things but a whole new identity?

A Community of Individuals

Romulan Captain: It would seem that we are not completely dissimilar after all, in our hopes, or in our fears.

By this point in the Star Trek universe, Klingons, Romulans, Cardassians, and Humans have been fighting and battling for centuries, under the identity of “enemies.” As the message tells them a different story, some of them begin to accept their new identity: a community of individuals, much like Galen’s gift for Picard. But they could never see their new identity unless they knew where they came from, what they were made for, who they were made to be.

We can’t know ourselves unless we know the true story that we are in.

The chase is all about life: where it came from, who put it together, why we’re here; and the answer is wired into our very being. It connects us all in a common experience. But more than that, it is a search for a true story about our identity.

Our history, our ancestors, our people, and even our future all affect who we are. Writer and pastor Jason Dorsey says, “we can’t know ourselves unless we know the true story that we are in.” Namely – God’s story of creation, fall, redemption, and restoration. That story is written on our hearts; it resonates within us every time we hear an echo of it.

You don’t have to chase down secret clues left billions of years ago if you want to figure out your story, because the voice of our creator still echoes through the cosmos. It speaks of God’s grace; if you’re a Christian, the works of God’s grace are part of your identity: He created you, bought you back, and holds you close as His child.

So what does it look like to pursue your identity, your story? What would it be like if you pursued your identity as recklessly as Picard pursued his? And what would change about you if you lived like you knew where you’d come from?

They would be the discovery of your lifetime.

Thanks for reading Trektember on Redeeming Culture. We hope you accompany us on our trip to alternate universes tomorrow as David Lichty looks at Parallels.

Next article The Tapestry of Star Trek: TNG Part 1