Kevin C. Neece, author of The Gospel According to Star Trek, returns to stand up for what’s right with episode 21 of season 4, The Drumhead. 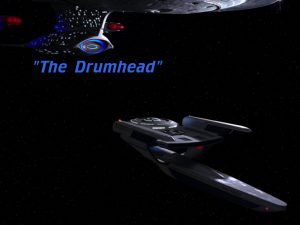 After a Klingon exobiologist (aboard the Enterprise as part of a scientific exchange program) is suspected of being a spy colluding with the Romulan government, Retired Admiral Norah Satie arrives onboard to help conduct an investigation. Once the Klingon officer, J’Dan, confesses to stealing sensitive information, Satie surmises that he may well have had inside help from a person or persons on the Enterprise crew. As her investigation expands, she arouses fear and suspicion aboard the ship and Picard becomes increasingly uncomfortable with her tactics, until he himself is called in for questioning. 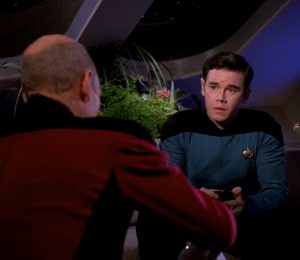 This is truly TNG at its finest. With an excellently structured and eloquent screenplay by Jeri Taylor and thoughtful, careful direction by Jonathan Frakes in his third outing at the helm, “The Drumhead” is a multi-layered drama that rings as true today as when it was first broadcast. Anchored by the pitch-perfect interplay between a complex, humanizing portrayal by Jean Simmons as Admiral Satie and one of Patrick Stewart’s most understated, yet masterful performances in the series, this episode sustains believable and engaging dramatic tension through efficient and focused storytelling that feels neither rushed nor thin. Spencer Garrett shines as Simon Tarses, allowing the audience a foothold for suspicion, but quickly earning their trust and sympathy, without any gimmicks. Thematically, the episode comes to some core ideas of American democracy and Star Trek ethics, emphasizing the importance of careful consideration over a rush to judgment. 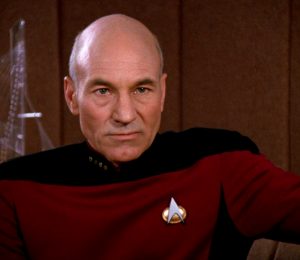 It is instructive to note Picard’s tone throughout the episode. He is firm, at times insistent, but always calm. His calm is so measured that it seems to even increase as the episode unfolds. Just after Crewman Tarses’ initial interrogation, we see his deliberate effort to prevent himself from being caught up in the rising intensity of the situation. Speaking to Satie in his ready room, Picard begins to become agitated. “But you’re asking,” he says, then takes a breath, lowers and softens his voice, and restates himself, “you’re asking me to restrict Mister Tarses’ movements solely on the basis on Sabin’s feeling.” We’ve seen Picard lose his cool, especially in matters that threatened or violated his core values. (His intense and unyielding dressing down of Wesley Crusher in the episode “The First Duty” comes to mind.) We know he can and will raise his voice. But throughout this episode, even as his words are direct and unalloyed, his voice is quiet, his approach is careful, and his demeanor is unperturbed. Even during his most pointed objection to Satie, with carefully chosen words that could easily have been shouted, he speaks with barely enough volume to project his voice across the ready room. “Admiral,” he says, “what you’re doing here is unethical. It’s immoral. I’ll fight it.”

While these words would seem to indicate that Picard is ready to come against Satie, rhetorical guns a-blazing, he instead speaks calmly and carefully on the stand, expressing his concerns about the proceedings and quietly pointing out the moral stakes. Meanwhile, Satie digs in her heels and attempts to shout him down, her vitriol fueled by her increasing frustration and her paranoid agenda exposed by Picard’s collected, careful demeanor. Picard barely has to directly refute her accusations. He refuses to get caught up in the battle she is creating. Instead, he fights her by imploring her to stop, appealing to their shared values, and demonstrating with his words and actions that intense combat is unnecessary and destructive. 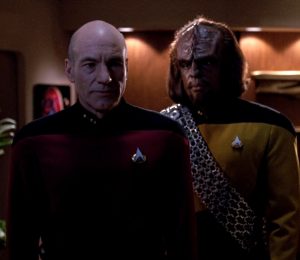 Perhaps this is one reason Jesus tells us, not to seek out our enemies, or to attack them, or to defend ourselves and our way of life against them, but to love them–because the poison of fear is quick and virulent and the toxicity of hatred is self-feeding and always lethal. “We think we’ve come so far,” Picard says. “The torture of heretics, the burning of witches, it’s all ancient history. Then, before you can blink an eye, it suddenly threatens to start all over again.” Human nature is still corrupt, even in Star Trek’s supposedly idyllic 24th century. “Vigilance,” the captain concludes, “is the price we have to continually pay.” Each of us is capable of being caught up in the shrill of our particular epoch and the vigilance Picard prescribes is not simply against those who raise the spectre of fear, but against the weaknesses in our own hearts. Such weakness is endemic to humanity, but overcome by Christ.

Thanks for reading Trektember on Redeeming Culture. Tomorrow: Darmok and Reed Lackey at Tenagra. See you then.

Next article Review| To The Bone