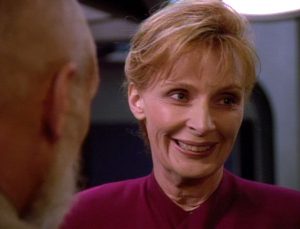 Season 7 was NOT the Best Ever. Not that it was terrible! Heck, Gates McFadden thinks her best episodes were in season 7. But Rick Berman said that season 7 was his most chaotic time. He was overseeing the final year of this series, season 2 of Deep Space Nine, pre-production on the movie Star Trek: Generations (to start shooting a week after this series wrapped), and he was developing Star Trek: Voyager.

Writer Ron Moore also did not favor the seventh year. “I remember season seven as being just the worst time in the writers’ room.” The team of four all cited being distracted. They’d had two days off between seasons 6 and 7, because the seventh season’s production schedule had moved up a few weeks so that the feature film could start shooting on the show’s sets in April of the next year. Grasping for new story ideas, Moore remembered being tapped out, and his just suggesting once, offhand, “I don’t know, how about Geordi’s mother?”

There were a lot of family members in season seven. “That’s doom to a season,” said Naren Shankar. Brannon Braga noted that it seemed like everyone had a family member come out. In addition to the usuals (Data’s brother Lore, Deanna’s mother Lwaxana, Worf’s son Alexander) and some returns of Wesley, this year we also got to meet Geordi’s mother, Geordi’s father, Troi’s older sister, Data’s step-mother, Worf’s foster brother, Dr. Crusher’s dead grandmother’s “man”-in-her-life, Wesley’s long dead father, and Picard’s long lost son (except not really). Michael Piller said that they had very deliberately sought to tie up storylines and threads that had been set up, perhaps trying to excuse the needless narrative nepotism.

In the fine conversation recorded as “Inside the Writer’s Room,” a blu-ray extra, the writing team of four joked at their own expense about some of the rustier episodes of seasons 6 and 7.
“Rascals,” for instance, was the bane of Ron Moore’s existence.

Naren: “It was The Muppet Babies, it was horrible!”
Braga: “We hated it.”
Naren: “Do you remember ‘Suspicions?’ I took that particular bullet…Back in the day, it was like the youngest (newest) guy on staff, which was me, got the crappiest script to re-write.”
Braga: “…just ripped off Twilight Zone. Nightmare at 20,000 feet – BOOM!” for Realm of Fear.
Naren: “’Aquiel’ started as Laura, a Geordi mystery-romance. The secret was ‘it’s the dog!’ It’s so awful! …We didn’t do mysteries well.”
Naren, on “Force of Nature:” “Don’t try to do an explicitly cautionary tale… ‘We must make an episode about the environment!’ …a speed limit in space, it’s like, what a… It was well intentioned.”

Rene offered his self-assessed, worst line he ever wrote, for Troi: “It’s just not like Kwan to take his life!” (in “Eye of the Beholder”) 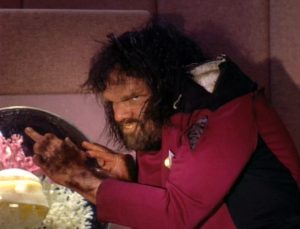 He also said that one of his least favorites, “Sub Rosa,” came from love for Turn of the Screw.

Naren Shankar, who was also the science consultant, had had a friend make him a Technobabble Generator just as a joke, and noted that two years later it was being used for the show “and it worked!”
&nbsp

And they all agreed that “Genesis” was preposterous. 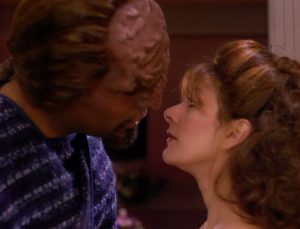 One of the least favorite developments for fans was the romance between Troi and Worf; started (quite well, I would say) in “Parallels.” Moore says, “We were looking for something for her to do other than sitting next to Picard and saying the screamingly obvious.” It really had started out as a joke, but when they watched the show, they saw actual chemistry, so they let it go on. 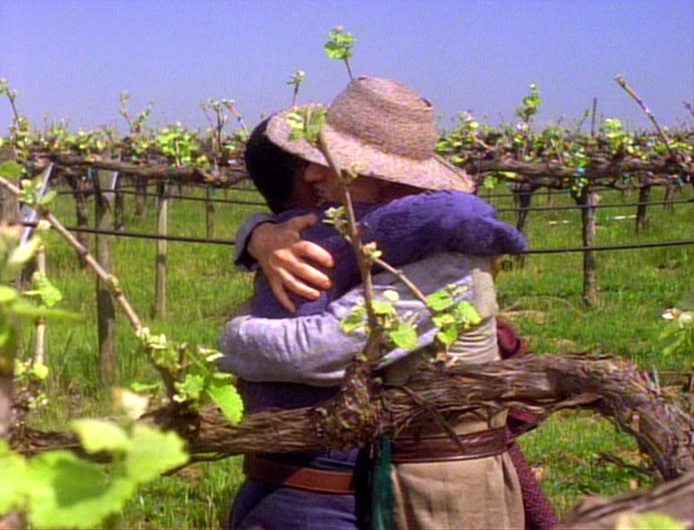 On the positive side, they all thought that “The Pegasus” was a standout season seven episode; and pretty much everyone likes the finale, “All Good Things.” Moore and Braga had written the first TNG film, Generations, while Echevarria, Shankar and Jeri Taylor carried most of the weight of the episodes. After writing the film, they were wiped out, but they were assigned to do the finale, and came up with the idea of the three time periods. They had spent a year working on the movie, and then only two weeks writing the finale.

Both think the finale turned out much better. Braga said, “The movie wasn’t that great.” “All Good Things” is Braga’s favorite episode of the series because of how it pulled everything together. 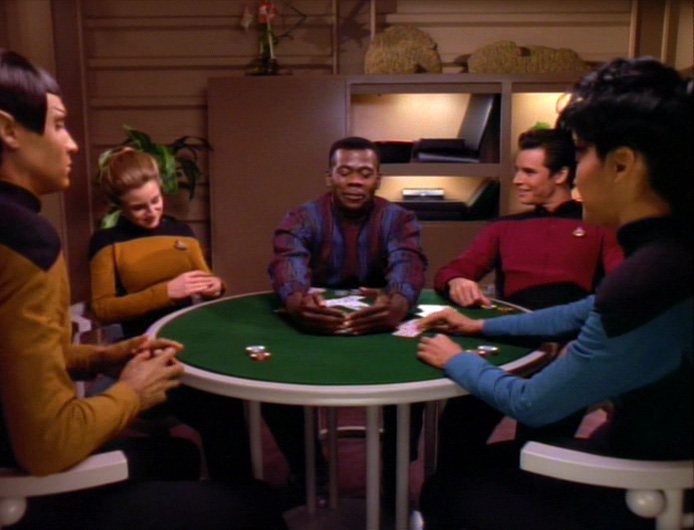 His other favorite was “The Nth Degree.” Ron Moore’s personal favorite is “Ship in a Bottle,” followed closely by “Frame of Mind,” which all four of the writers loved. Of the ones he wrote, Moore’s favorite is “Tapestry.” Braga and Shankar also thought that was his best script. Shankar’s favorite episode was “Lower Decks.” It’s one of mine too. 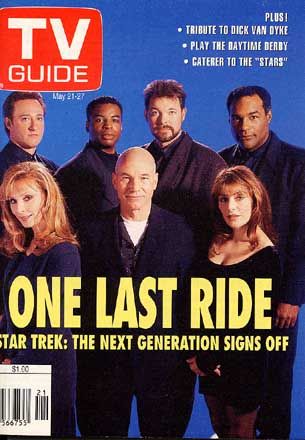 Why did the series only run seven years? The ratings weren’t bad, and despite all the mucking about above, it wasn’t plummeting in quality, just stepping down a little from some previous heights. Rick Berman said that it was “a financial decision by Paramount.” As actors and crew get more money, and effects go up in price, shows get more expensive to produce. Additionally, for syndication, 175 episodes was considered enough. Sherry Lansing, who ran the motion picture division at Paramount, had called Berman a year earlier and said that they wanted to do a Next Generation movie.

Series producer David Livingston pointed out that “In a studio system, the feature division takes precedence over episodic television… It could have gone an eighth season. It had the highest ratings that it had ever had. Every year it went up, and as the season progressed, the ratings kept increasing. So it left at the pinnacle of success.”

Trek Backstory has one final mission, coming tomorrow! While you wait, don’t miss our ongoing reviews of the best episodes of Star Trek: The Next Generation, including today’s article about the first episode of the series. Thanks for reading Redeeming Culture.