Mikey Fissel of Reel World Theology is back to walk the Lower Decks in Season 7, Episode 15.

Perspective on the Lower Decks 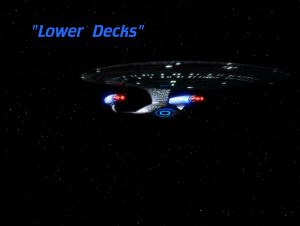 By now, it’s no surprise that a review in Trektember is covering an episode considered to be “among the best.” “Lower Decks” is no different. There are often various reasons episodes find themselves listed amongst the best: usually because they are the best of a particular character, or deal with a moral quagmire particularly well, or maybe it’s the best look at a species we’ve ever had. This is none of those, really. However, it does something we never see elsewhere in the series. Instead of our command crew, Lower Decks focuses on the opposite– the regulars who aren’t staples of the bridge crew. 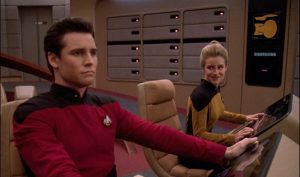 Too often, the best picture of anyone outside the command crew we ever get are characters passing through who usually are not actual characters, but placeholders for moral dilemmas or plot devices. In “Lower Decks,” we see real, three-dimensional characters who have talents, goals, dreams, worries, and disappointments. In that way, this is one of the most grounded episodes of Star Trek ever made. No longer are we focused on the near-superhuman command crew who always have the best and most exciting storylines, but we get to take a look at the people that, honestly, probably reflect us a lot more than we’d like to admit.

The real brilliance of this episode is that we are only tuned into the larger story arc through the eyes of our “lower deck” crew members. We never get an insider peek into Picard or Riker strategizing, or Data and Geordi planning. We’re on the outside, just like the crew. We’re trying to piece together the mystery of the strange Cardassian patient in Sick Bay. Who is he? Where did he come from? What does the Captain have planned? Why is everyone being sworn to keep what they know secret?

This is great story-telling. 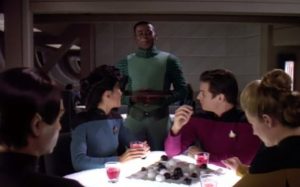 Our protagonists in Lower Decks mainly consist of a small group of friends, most of whom are hoping for promotion or advancement in their duties. We get a Nurse Ogawa who doesn’t know if her boyfriend wants to break things off with her. We have Taurik, a Vulcan with a tendency to over-advise, trying to strike a balance between being helpful and being respectful to the chain of command. Centrally, we see two characters, Sam Lavelle and Sito Jaxa (someone you may remember from her infamous inclusion as a cadet in the episode “The First Duty“), vying for one promotion. 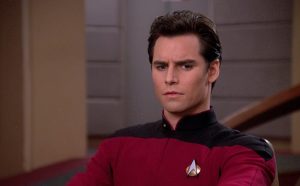 Most of the episode, Sam feels like Commander Riker is out to get him because he just can’t get that positive word of encouragement; while, most importantly, Sito is the disgraced cadet member now serving on the ship captained by the very man who helped bring her lie at Starfleet Academy to light. 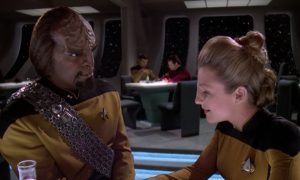 Any one of these would be enough to flesh out some great lesson about humanity (especially Sito’s journey), but it’s their collective perspective that I want to talk about.

You see, what I mentioned before, about which section of the crew represents us? I wasn’t kidding. This is too often our lives as Christians. We think we’re the captain, but, if we’re honest, we’re really hoping to make ensign.

It hits me every time I watch this episode. I see a group of hopeful and determined young crewman carry out their responsibilities faithfully in spite of having no idea what is specifically happening all around them. They carry out their duties because they believe in the mission of Starfleet. They believe in the command crew who are making the decisions above them. In some cases, they are willing to risk their lives on dangerous missions for that “greater good.”

Do our fervent prayers often sound so different?

“I want to follow your commands, but what if things don’t seem right?”

“Does anyone notice me?”

“Is what I am doing even making a difference?” 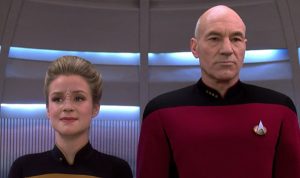 It helps to trust the captain and the mission. Without that faith– without that belief– we’d be hopeless. While the crew sit in Ten Forward, gossiping about promotions, the Captain is trying to navigate a situation that has ramifications for the future of the entire Federation. Obviously this is a poor metaphor because we, as human beings, can’t even fathom what our “Captain” is holding together.

It’s always so humbling to remember that we often fail to identify with the weak or powerless in stories like this. It’s why “Lower Decks” makes me more emotional the older I get. When I was little, I had such a limited understanding of just how small my thinking is compared to the God of the universe; Now that I’m older, all I really know is how little I know. But that’s okay. It’s not my job to “captain” the universe. My job involves faithfulness. It involves encouraging my friends. It is being ready for service in whatever way my true Captain asks.

This isn’t a call for a life of insignificance or resignation. If anything, the closing moments of the episode show us just how important we are. If there was ever a more perfect picture of “rejoice with those who rejoice, weep with those who weep” (Romans 12:15), it’s this small circle of friends congratulating Sam on his promotion while they all lift a glass to their fallen friend.

And when Worf joins them, due to the prodding of Ten Forward bartender, Ben (acting as a stand-in for the Holy Spirit this whole episode, right?), we see that rank doesn’t trump community. It reminds us that tears are only temporary and our mission is worth the sacrifice. It’s a lesson that is often hard to see from the bridge, but it’s something that we can’t forget on the Lower Decks.

Thanks for reading Trektember on Redeeming Culture!  Tomorrow is TNG’s official 30th anniversary, and we’re celebrating with a review of the pilot episode, Encounter at Farpoint, by returning Trektember contributor Mike Poteet. Make sure you come back!

Next article Trek Backstory, part 22: Was Season 6 the Best Ever?