Star Trek: The Next Generation turned thirty years old yesterday!  This month, Redeeming Culture assembled the finest crew of culture redeemers from all over the internet to investigate the spiritual harmonies in this cornerstone of science fiction. Yesterday, we looked at the first episode of the series, and today, David Atwell is going all the way into the future with the final episode of the series: All Good Things… 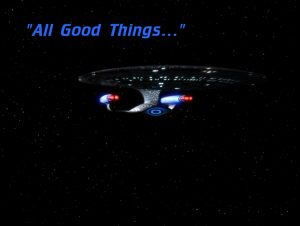 I’m always a sucker for a good time-travel episode, and “All Good Things…” wastes no time getting us right into one.

Picard finds himself ping-ponging between three different time periods: the minutes before he first appeared onscreen in “Encounter at Farpoint” (at the beginning of the series), the time considered “now” in the show’s canon (that is, seven years into the Enterprise‘s mission), and his distant future (around twenty-five years after the episode’s “now”). Picard connects the clues, which all lead to Q– and the conclusion of the trial from the first episode of the series. The Continuum, Q says, has rendered their verdict upon humanity: they will be wiped from the universe, and the sentence will be carried out by Picard’s own hand. Hampered by a distrustful crew in the past and a scattered crew in the future, Picard must gather the Enterprise and her crew from each era to the same place to save humanity’s past, present, and future. 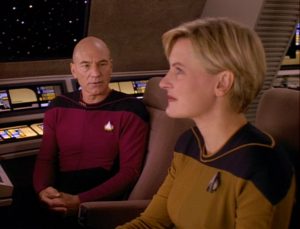 “All Good Things…” is a wonder of a series finale. Perfectly balanced between nostalgia and newness, between adventure and puzzle, between sentimentality and raw reality. I love the meticulous recreation of Season 1 TNG, as well as the snapshot of Data’s growth over time. I love the mystery; I love how they get the band back together; I love how it pays off and bookends a long, long story arc; and I love many more things besides.* Above all, I love the final scene. It’s not my favorite episode of The Next Generation, but it is far and away my favorite series finale in the franchise.

The story is impressive, not the least of which because it’s so complex. “All Good Things…” is one cohesive story, but it’s really made up of three intertwined narratives; three broken worlds, tied together by Jean-Luc Picard.

The Accuser in the Past

The “Past” storyline is something that we haven’t seen before: Picard is the captain of an Enterprise crew that doesn’t trust him. His unusual behavior from his first moments on board and his erratic orders throughout eventually give Yar, O’Brien, Worf, and Troi cause to question his orders. But none of that may be as disconcerting to him as feeling like the world is wrong somehow: the things he remember just aren’t correct. Everything is familiar, but not quite the same. 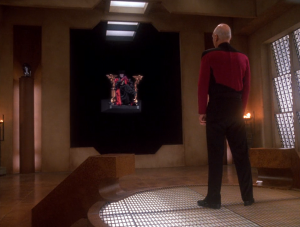 When Q finally arrives, he accuses Picard in of something that’s also familiar: of being the representative a “dangerous, savage, child race.” It’s a charge Picard thought was dropped and taken care of, but here it is again. The accuser holds Picard’s past against him, and the sentence is annihilation.

The Accuser in the Present

Sometimes, knowing what is going to happen doesn’t make things better; it just means you worry about them for longer. Picard has foreknowledge from the future, a crew he knows, and the world he’s familiar with—even so, he has to cope with the inevitability of a disease that will take his mind from him, and the inevitability of a tragedy that will take his friends from him. The broken world is here, too, hiding just beneath the surface as Q makes Picard second-guess his decision. 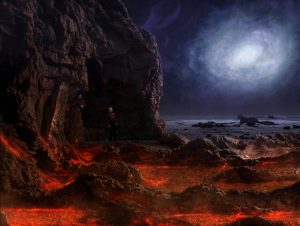 This time, the accuser contests Picard’s decision to destroy the anomaly, showing Picard a primordial sea that represents his own origin; and this time, his accusation is that Picard is little better than the goo from which they arose. The accuser holds Picard’s nature against him, and the sentence again is annihilation.

The Accuser in the Future

The future that Picard sees in this episode eventually bears itself out to be a particuarly sad one. The crew that we’ve watched grow so close for seven years is scattered by tragedy and neglect; the captain that we’ve looked up to for seven years no longer has a mind we can trust. The minor tragedy of this broken family is more disconcerting, I think, than the imminent destruction of the human race. Their broken world has pulled them apart. 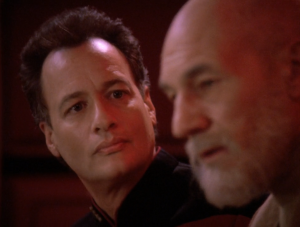 And even here Picard can’t shake his accuser. It’s a little less clear, but with Q’s dismissiveness during what Picard believes to be his final moments of life and his continued insistence that Picard is the one who destroys humanity, it seems that the accuser holds Picard’s failures against him. This time it is not as much a sentence as it is a consequence, but the outcome is the same: annihilation.

Our accuser – your accuser, in fact – has the same tactics as Q. Revelation 12:10 calls him the “accuser of the brothers” – that is, the accuser of the Christians. He accuses us of many things – three of which are, like Q, accusations about our past, our nature, and our failures.

He tells us that our past makes us unworthy of God’s grace; but God tells us that “where sin increased, grace abounded all the more.” (Romans 5:20, ESV)

He tells us that our nature makes us unable to live righteous lives pleasing to Christ; but God promises us that “I will give them one heart, and a new spirit I will put within them. I will remove the heart of stone from their flesh and give them a heart of flesh, that they may walk in my statutes and keep my rules and obey them.” (Ezekiel 11:19-20, ESV)

He tells us that our failures and sin make us unlovable and irredeemable, but God’s truth illuminates that lie as well: “For as high as the heavens are above the earth, so great is his steadfast love toward those who fear him; as far as the east is from the west, so far does he remove our transgressions from us.” (Psalm 103:11-12, ESV) 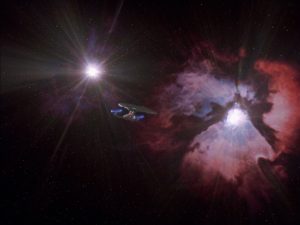 The Savior of Eternity doesn’t just save the universe. He didn’t just create us and leave. Now He remains with us, and still destroys the lies of our accuser with the truth of His Word. He invites His people to join Him on His ongoing adventure. He fellowships with us, despite our sin. And He loves us better than anyone else ever could – by telling us the truth.

Five card stud, nothing wild…and the sky’s the limit. 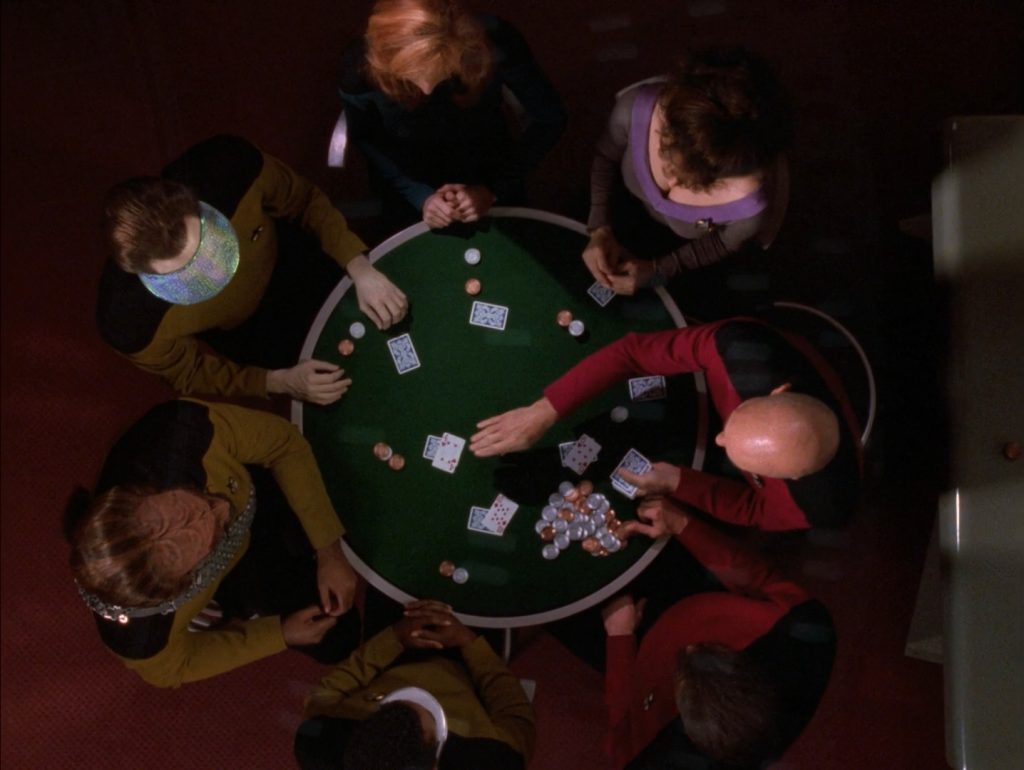 Thank you for reading Redeeming Culture and Trektember!  The show may be over, but Trektember has one more mission. Come back tomorrow for our wrap-up post.

* I love the fact that Picard, Riker, and Troi have the same conversation, almost verbatim but with different roles, about second-guessing their course of action that Worf, Riker, and Picard had in “Cause and Effect.”

WORF: Maybe we should reverse course.
RIKER: For all we know, reversing course may be what leads us into the crash.
PICARD: No. We can’t afford to start second guessing ourselves. We’ll stay on this course until we have reason to change it.

PICARD: So what am I going to do? Lock myself in a room in all three different time periods?
RIKER: Captain, maybe not acting is what causes the destruction of mankind. What if you were needed on the Bridge at a key moment, and you weren’t there?
TROI: I don’t think we can start second guessing ourselves. I think we have to proceed normally and deal with each situation as it occurs.

Previous articleTrek Backstory, part 23: Season 7… was NOT the Best Ever

Next article Trek Backstory, part 24 - The Next Generation’s Legacies