Today’s episode is from season 7, episode 11: Parallels. What if things could be different?

What the episode is about: 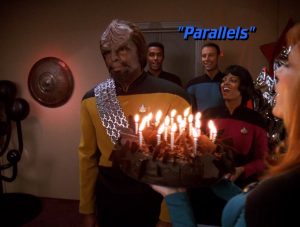 Worf slowly realizes that he is hopping between possible universes, to the growing concern of those around him who expect him to know what he was just doing or saying, or how to raise the shields he was supposed to raise, or just who it is he went and married some years ago. Writer Brannon Braga literally explodes the concept by the ending, Worfs are returned to their respective universes, and he opens his mind to previously unconsidered possibilities.

Why I chose it:

Except for the finale, this was the last high concept, reality bending episode, and I really like the puzzle episodes. I don’t think I saw it on its initial run, and it pops up as a regular favorite of that ilk. Aside from that nudge, I chose this one almost randomly, as an exercise, to test the theory that we can find reality in any well crafted story, that what God says is true is so true that it cannot be easily avoided. Truth is that which corresponds to reality, and God is a reality, not just some idea we embrace, or one we hope or merely wish to be true.

So I put my money where Redeeming Culture’s mouth is, counting on that to prove correct.

Parallels is not shooting for a mountaintop of profundity. It is, at heart, a fun episode of The Next Generation; and yet, if we look on it with better eyes, we can feed on it even if it was not intended to bring us a great theological meal. That’s my first divine theme: Rest. This is a restful episode. As much chaos as there is happening to Worf, the episode is rarely even tense, but instead of being dull, it’s generally interesting, usually filled with supportive company, and often fun. Those adjectives could describe a good day off. We need days off – I’ve heard it’s in the Bible or something. I think that’s why this is among the frequent favorite episodes, even with so many more intricate conundrums available in the series.

It’s personal. People, and little moments, matter. As non-plussed as Worf is by his surprise party, watch him drop that shield and almost gasp with interest when a gift from his son is presented to him. This show goes for the joke more often than usual, but it never does that at the expense of the humanity of the characters.

Little details matter in Parallels. This primarily shows up in the changes Worf notices, but personal details count too. The fact that fine points are important is an idea woven through our scriptures.

“Are not five sparrows sold for two cents? Yet not one of them is forgotten before God. Indeed, the very hairs of your head are all numbered. Do not fear; you are more valuable than many sparrows.”
Luke 12:6-7

“Your eyes have seen my unformed substance; and in Your book were all written the days that were ordained for me, when as yet there was not one of them. How precious also are Your thoughts to me, O God! How vast is the sum of them! If I should count them, they would outnumber the sand.”
Psalm 139:16-18a 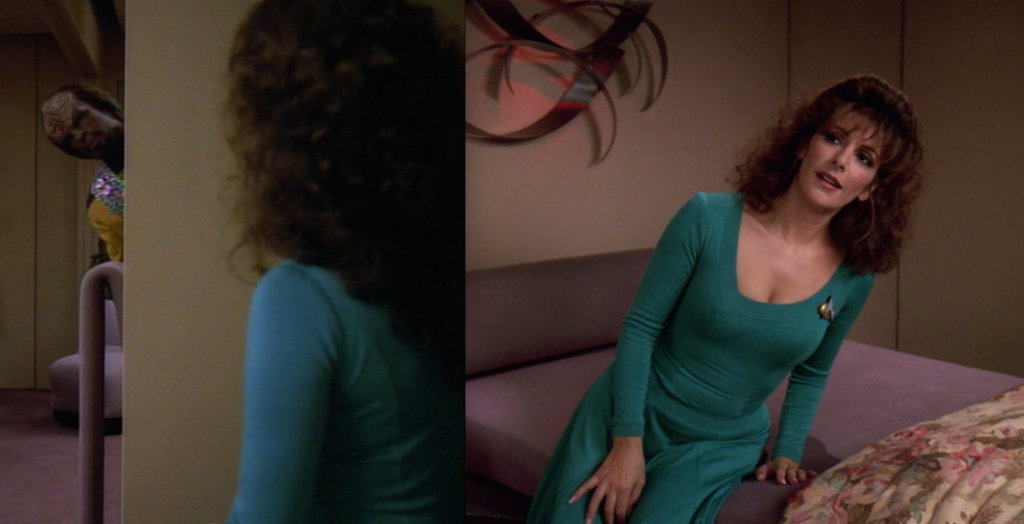 The romance between Troi and Worf, much maligned by Star Trek fans, began here. It was intended to be part of the humor of the show, a joke idea the writers had tossed around for a while. Worf’s introduction to that particular reality is funny, but when the show was complete, everyone saw chemistry between the characters. In this episode at least, and perhaps only, those two were very good together. It is built into us that details matter, and that is why the romance was continued; because of the little things the actors brought. It’s a good reason to extend a fictional relationship. I don’t actually think they continued it well, but in this episode they overcame the silliness of the idea. Sure, there are obvious, written-in moments, like Troi being the first to kiss his cheek at the surprise party, but it’s more evident in things like his constant comfort with confiding in her, and her trusting his guess about what is happening. It is in the hug they share when they each recognize that they don’t remember each other’s universe’s children.

Also in Parallels, support from his friends—not just the crew, but his friends—is a given. Worf is putting forth a pretty wild idea about what he is experiencing, yet his wife, Troi, goes along with it. She’s not humoring him, either; she trusts who she knows him to be, and she genuinely helps. In the next scene, Data is already assisting, without us needing to see the exchange that would have brought him up to speed. When an alternate Captain Riker sees our Worf’s reaction to hearing that his Picard had not survived the Borg incident, he knows his friend, and says, “You don’t remember any of this, do you.” with some natural compassion, rather than story building astonishment. It’s the kind of humbleness friends have for their friends in need.

“…with humility of mind regard one another as more important than yourselves…
Philippians 2:3b

This story is about what-ifs: not just situational ones, like “what if data had blue eyes,” but even emotional ones, like “what if Troi was basically Troi, and I was basically me, and we sort of dug each other.” It is something that had simply never occurred to him, but now it has; and he chooses, by the end, to see it well, rather than to fall into stereotypical Klingon aversions.

It’s this in practice:

We get to look at things with better eyes, and our scriptures show that there can be reward in doing that.

…and just a note. On the subject of moments, this one, from a Riker who lost his Picard four years before, and is talking with one from another reality, is perfectly played. 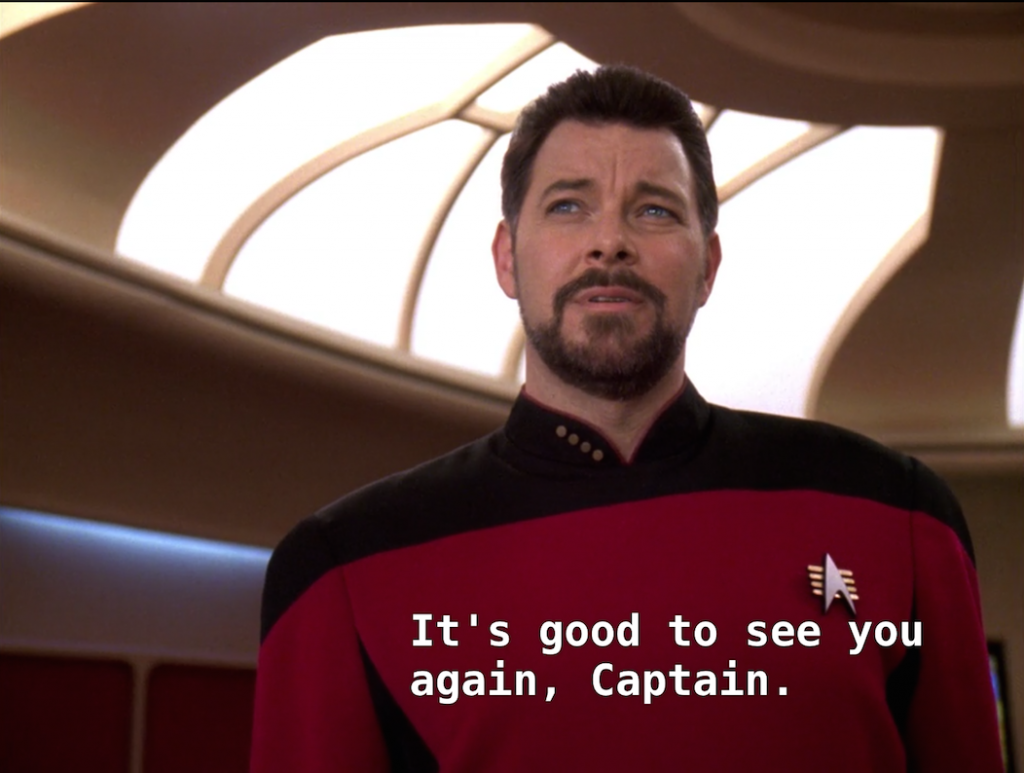 Thank you for reading Redeeming Culture!  Tomorrow, David Atwell is back with a secret about The Pegasus.