In inventing a new universe from scratch, one of the art department’s goals was to design and create the props, screens, equipment etc. that would appear believable, and clearly understandable as everyday things to this crew. 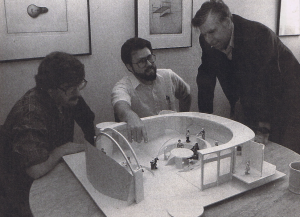 This is why the Enterprise had a style some would call a “Hyatt Regency in space” look. People, even families, would have to live there for up to 10 years. It had to look comfortable.

Clearly, some of the forward thinking was spot on. Star Trek had already been the first show with ‘cell phones’. They were hand held communicators in the original series, pins in The Next Generation, and they made communication with anyone possible at almost any time, which other dramas simply couldn’t do. In contemporary Law & Order, if you needed to talk to someone, you drove over or found a desk phone. One of the most futuristic elements of the show that now registers as contemporary was the use of touch screens, which were unthinkable in 1987. How could a pane of glass know where you’re touching it? At the time, that was pure magic, like having a beam of light just stop after three feet (lightsabers, which we still don’t have [fortunately]).

…which of you, desiring to build a tower, does not first sit down and count the cost, whether he has enough to complete it? Otherwise, when he has laid a foundation and is not able to finish, all who see it begin to mock him, saying, ‘This man began to build and was not able to finish.’
Luke 14:28-30

Special effects were going to be a huge issue with the new series. Prior to Star Trek in the 60’s, most television ‘effects’ work consisted of things like titles, fades, dissolves and the occasional lightning bolt or matte painting. The Next Generation was going to have to do more.

Star Trek had laser beams, spaceships and sparkly transporters, and its budget only afforded roughly 12 effects shots per episode. For Next Generation, most of the almost 2 million dollars eventually budgeted for each episode was essentially pre-spent on the salaries of the 200 people it took to make them, and filming expenses for an 8 day shoot only using existing sets. The remaining $200 thousand was all that was left for anything extra – a new set, a guest star, new costumes, or the firing of a phaser (each firing cost something like one to two thousand dollars). After years of fantasy and science fiction movies had raised audience expectations, the creative team knew that a dozen effects a week would not do.

Associate producer Peter Lauritson explained how they got around this problem in a 1989 issue of Cinefex.

“When the idea to bring back Star Trek came up, I started investigating how they had done the effects on the old series – because the time constraints of weekly television are very difficult. As it turns out, the original show had every optical house in town working for them and they were right up against their schedule every single week.

I had been following the advances of videotape for some time and felt that the timing was right to use video postproduction for this series. It was feasible and it was the only way this show would fly and not be an absolute killer to the people working on it. One of the things I had to do was bring to everyone’s attention the fact that if we went with video, we would never be able to release the show on film. That was a big issue for the studio… They hesitated, but when they saw the difference between a film budget and a video budget for the series, it did not take long to convince them that this was the only way it was ever going to work.”

The effects elements – a shot of a ship, a laser beam – were produced on film, but then they were transferred to video to be combined with other elements into completed images. On film, that was the part of the process which was so expensive and time consuming. 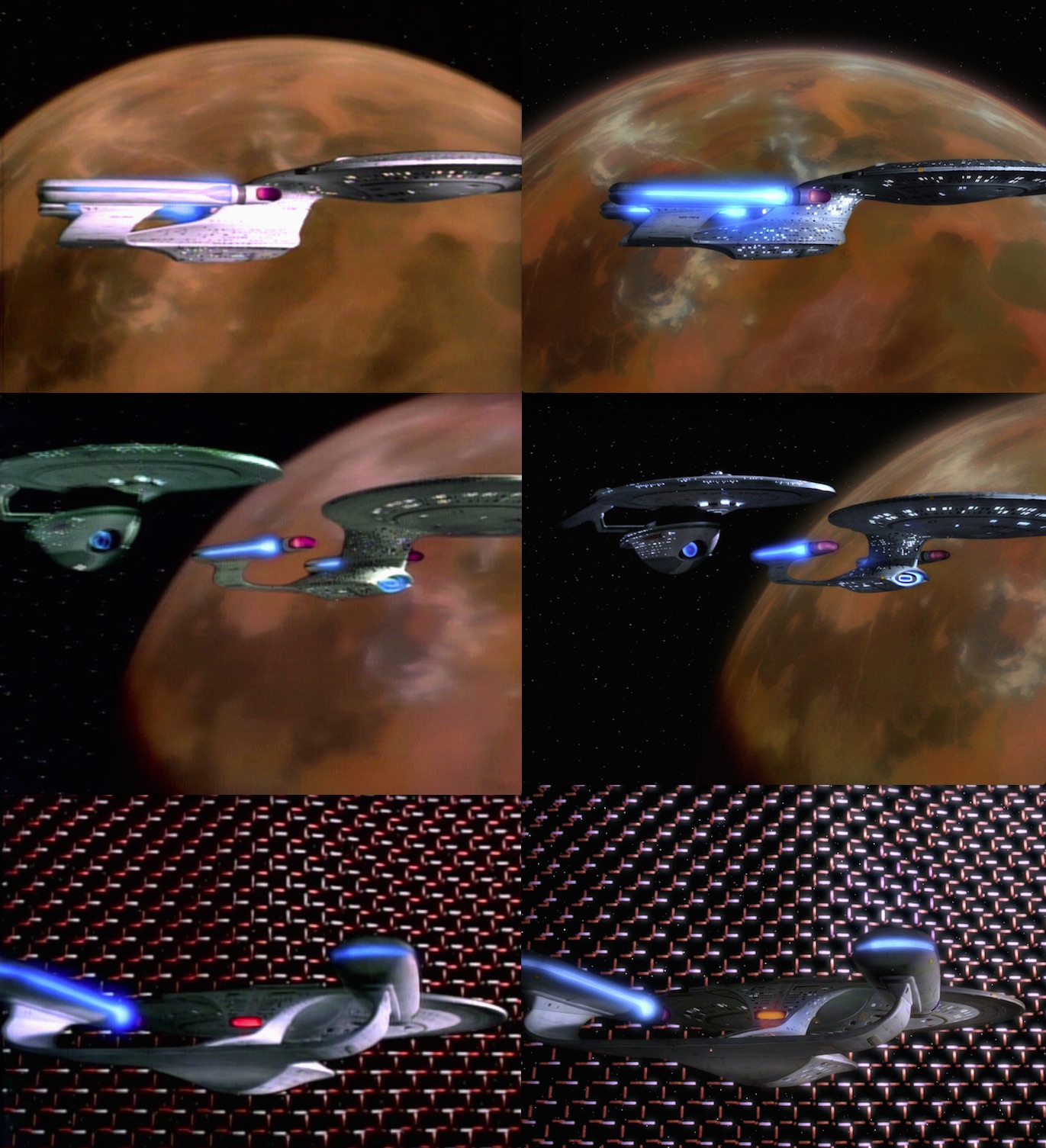 When I first saw these episodes, I remember being impressed with the design and the color in the effects shots, but also noticing that something looked strange about them. When the Enterprise crossed in front of a planet, it didn’t look like ship and planet were quite in the same place. Something just didn’t blend right. Those same shots now look positively flawless and gorgeous in high-definition as a result of computer compositing from the original film for the Blu-Ray release, but at the time they had made a conscious decision to trade a little bit of quality for a lot of time and budget.

One place they made no such tradeoff was on the score. It was in both Berman and Roddenberry’s vision of the show to never skimp on the music; when it originally aired, TNG was one of the only shows that still used live musicians and a full orchestra.

Composer Dennis McCarthy was paired with Ron Jones, and later Jay Chattaway, to handle the series’ composing needs. “I’ve always had six French Horns. That’s more musicians than are used in a lot of shows, period… it’s an appreciation, by the producers, of what a roomful of musicians can bring to each show… we never track, we never re-use anything. Every show is scored independently.” Paramount was also unusually generous in terms of scoring deadlines. “There’s plenty of time to write on Star Trek,” said McCarthy. “It’s not like some shows where you spot on Friday, and score on Monday! There’s a lot of time, so you can watch the show a few times without writing a note; just thinking about what’s going to best fit into the show.”

Ron Jones added, “They give us anywhere from a week and a half to two weeks to score an episode, and because we [the composers] alternated, we could almost treat it like a feature film. They don’t want us to hack it out.”