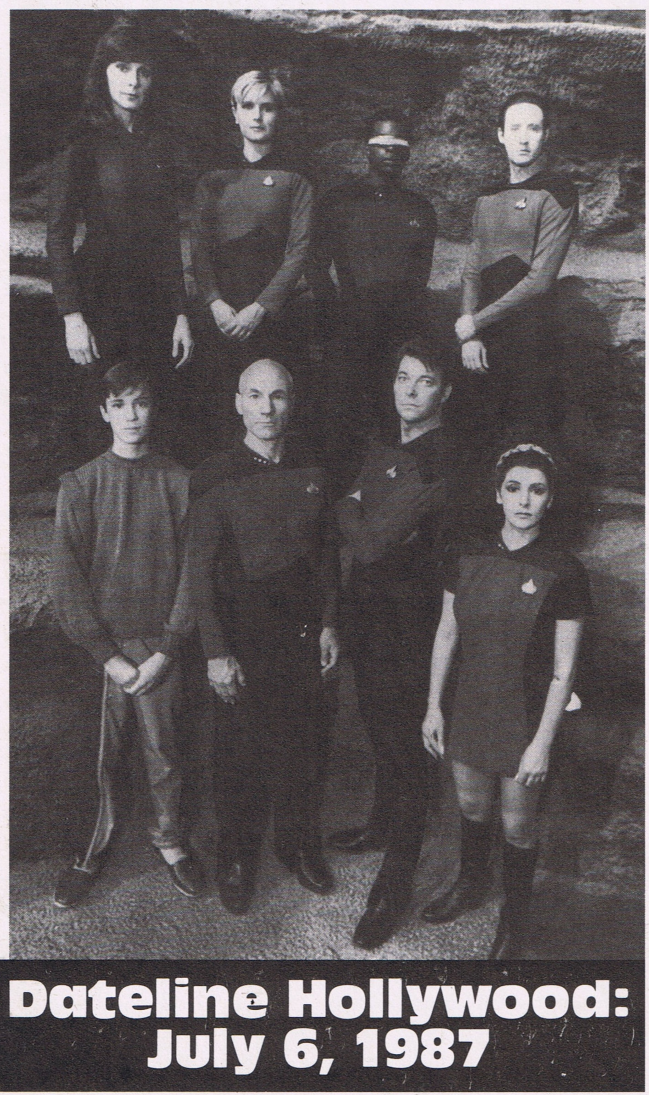 “…we want the new cast to have a chance to establish themselves firmly in the audience’s mind as heroes in their own right, without being overshadowed by competition with members of the old cast.”
David Gerrold

The selection of the cast we now think of as givens was actually pretty tough. There were many opportunities for TNG to have been a much different kind of show.

Most of the cast auditioned many times, over many weeks. Yar and Troi were initially selected for each other’s parts; Gates McFadden rounded out the women leads, and initially they were hopeful about their roles. “We have seen it in the scripts. All the roles for women are intelligent and strong,” McFadden said. “They are like their male counterparts in terms of their adherence to the mission’s Prime Directive. […] one thing is certain, the women in this show are not token characters. Their roles are legitimate and substantial.” 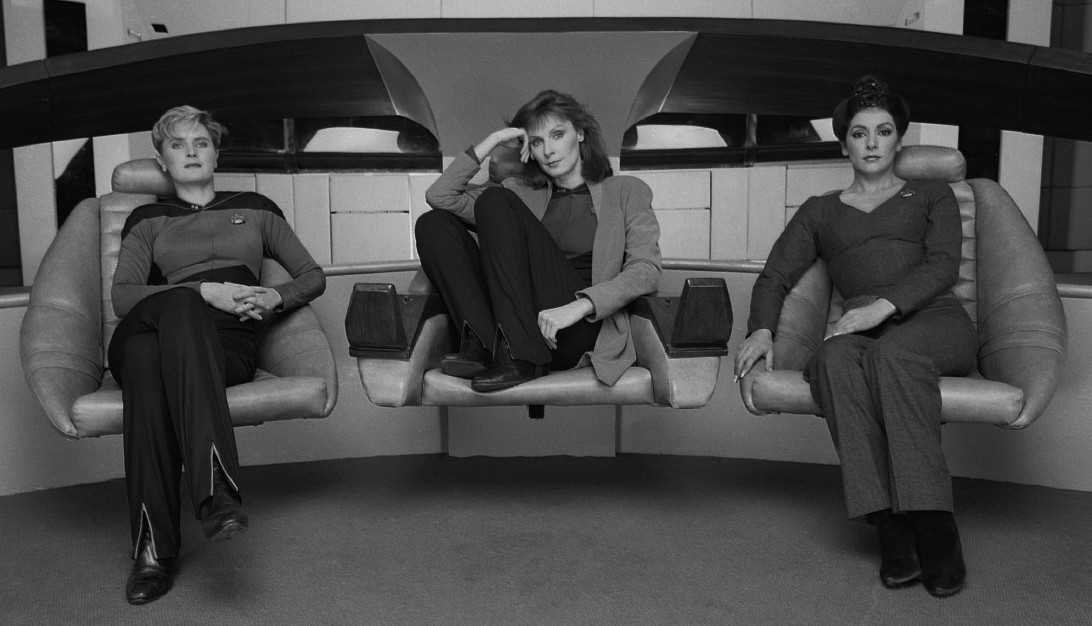 The character of Riker had been fully developed even before Patrick Stewart was considered for the Captain role. Berman has said that Roddenberry saw himself in Riker, or connected with him in some way, while Roddenberry said that, “Wesley was built a little bit on myself at 14. I was never the genius that he was, but that’s a wonderful time in life, when you’re meeting your first girls, and you’re seeing your first evidence of humans being evil to other humans.”

At the time, Wil Wheaton was one of the only two actors in the new cast who were considered stars in America, having headlined the hit film Stand By Me the year before. The other was LeVar Burton, famous from the original mini-series Roots. His expressive eyes had often been his most notable feature as an actor, and initially he enjoyed the challenge of acting with them covered. That wore off, but he certainly came in with a positive attitude.

Michael Dorn was the last lead to be cast, and his skin color is part of why he was called to read for the part. Dorn said, “It wasn’t about race, and it never was, really, with the character. Technically, I just think that they – they did it – they wanted African American guys because it’s less make-up time. Seriously! I mean it’s, because instead of making – painting – a guy dark, you know, his skin is already dark, and it was just one of those things where I think it was, you know, a technical answer.”

Roddenberry chose the cast himself, though he originally didn’t want Patrick Stewart. “The first thing I thought is, ‘Oh, I can’t put a bald-headed man in the captain’s chair.'” he said. Also up for Picard were Mitch Ryan, Roy Thines, Yaphet Koto and Stephen Macht.

Justman really pushed for Stewart. John Pike, then President of Paramount Studios, personally saw Macht and Stewart (in a wig) read for Picard, and Pike said, “Go with the English guy, and lose the wig,” which made Berman very happy.

As much as people contrast Picard and Kirk, Roddenberry had the same origin for both: Kirk was famously based on Captain Horatio Hornblower, and Stewart says that before shooting, Gene told him, “Read Horatio Hornblower. Jean-Luc Picard is there. And that was the only piece of advice he gave me.”

Patrick Stewart expected to only work on the show for 6 months (of a 6 year contract), and then go back to Britain. He signed on with that expectation. Brent Spiner had the same idea: “I thought we would do it a year and then we would go home, because, after all, no one can do another Star Trek.”

”Obviously, having steady employment for the next few years would be nice,” Marina Sirtis said. “But anybody doing a first series is scared it’s going to flop. We’ve all been in situations that were being hyped as sure things and failed.”

Preproduction on STAR TREK: THE NEXT GENERATION had started in February 1987. The 1-hour pilot (the Farpoint part of the story, which we’ll review near the end of the month) was turned into a 2-hour pilot late in the game; so Gene invented the character of Q, who first appears looking a bit like Trelane from the original series episode The Squire of Gothos. I think that comparison disappeared after this first episode, and he really became a worthy, essential part of the series.

The cast and crew had a week of rehearsal before filming the pilot. Shooting began on June first, for what was then to be an October premiere (it moved up a little). Production on the two part opener was completed on Thursday, June 25th. 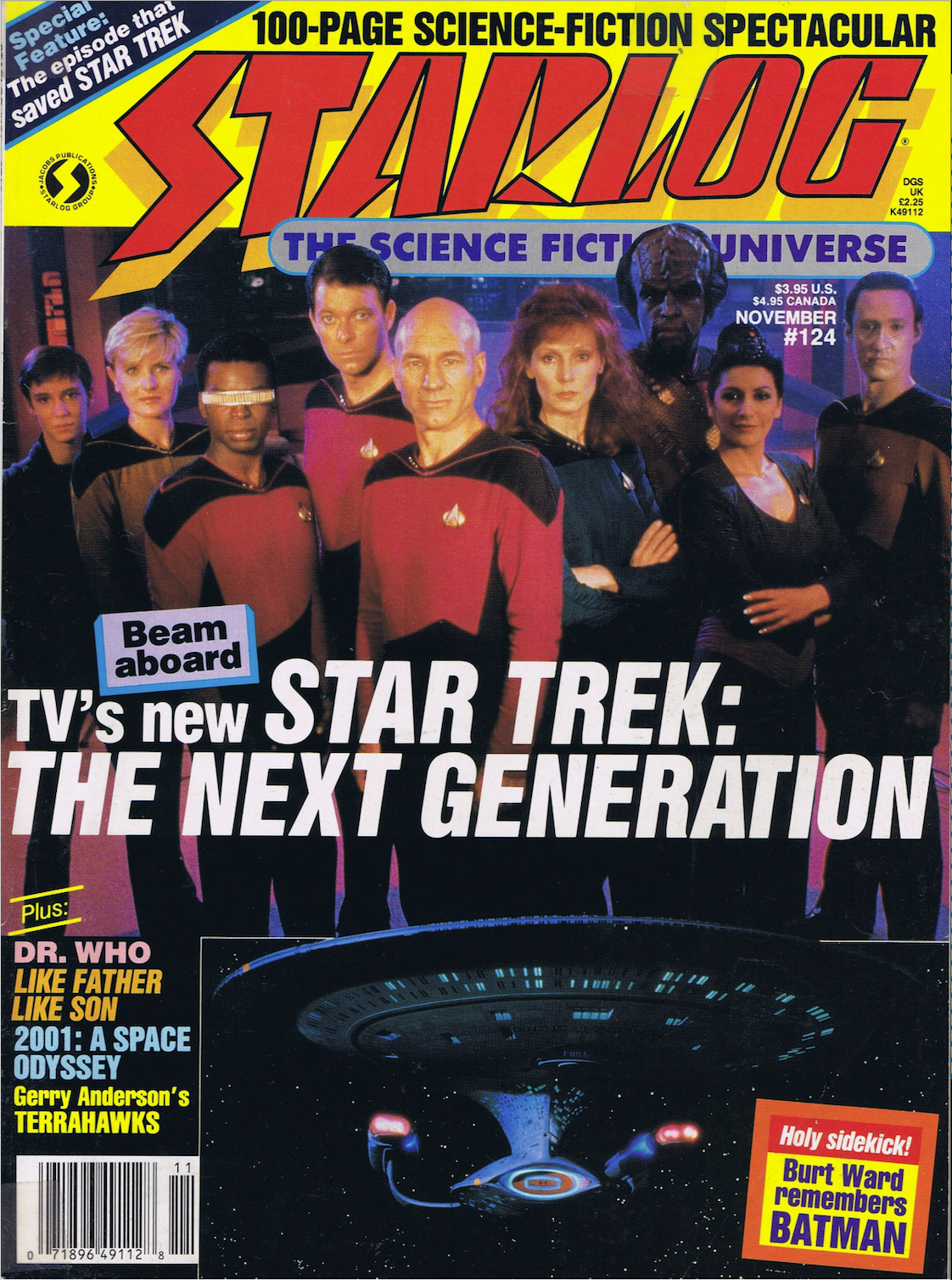 Early September was when most people got their first glimpses of the new show. Cast and series comparisons to the Original Series remained rampant, frustrating the new cast. Even before the show had aired, LeVar Burton was over being asked to compare the two casts, and Patrick Stewart said, “I insist on interrupting when people refer to me as ‘the new Captain Kirk.’ It is important to myself as well as to the series that people become familiar with Picard and not view him as merely a clone of Kirk… I don’t want to come across as having my back up about comparisons to the old series. Kirk and Spock are a very real part of the Star Trek history and the idea of this being The Next Generation should imply that we look as much to our history as to our future. All I ask is that we be permitted to get on with our extension of the series.”

Next article Trektember TNG - #8: The Offspring