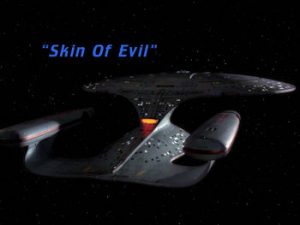 The Enterprise rushes to the barren planet of Vagra II, where a shuttlecraft carrying Counselor Troi has crashed. An away team beams down and encounters Armus, a sentient oil slick-like creature that describes itself as the “second skin, dank and vile,” the physical manifestation of “all that was evil and negative within” a species whose beauty “now dazzles all who see them.” Cast off by these long-gone beings, Armus is a cruel and sadistic entity, unceremoniously killing Enterprise security chief Tasha Yar as she attempts to reach the crashed shuttle.

Armus proceeds to play manipulative games with the Enterprise crew as he prevents them from reaching Troi and her pilot (one Lt. Ben Prieto, whom no episode, movie, or piece of tie-in fiction ever mentions again). Picard beams down to confront Armus himself. Back on the ship, Worf and Wesley find a way to beam Troi, Prieto, and Picard to safety, but not before the captain delivers a trademark Trek speech about human dignity and the necessity of freedom. Leaving Armus to an indefinite future of rage-filled isolation, the Enterprise crew watches a prerecorded holographic message from their fallen comrade at her memorial service.

“Skin of Evil” isn’t one of The Next Generation‘s subtler episodes, but despite an uneven script and an incredibly distracting special effects mismatch between Armus at rest and on the move, it stands out as, arguably, the first Star Trek story that takes the fact and (in this world) finality of death seriously. Some characters’ deaths hit Captain Kirk hard in the original series—Gary Mitchell’s, Edith Keeler’s, Miramanee’s—but the nature of 1960s episodic television ensured audiences the grief never lasted past the end credits. Spock’s death in Star Trek II was (and amazingly, remains) gut-wrenching, but is undone by the Genesis Effect in Star Trek III, and is never mentioned again except for comedic effect in subsequent movies. 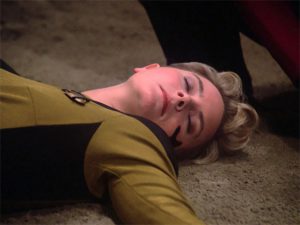 But Tasha’s death counts. And while later TNG attempted to backpedal on and soften it—framing it as senseless and meaningless, and giving Tasha a chance at a more “meaningful” demise in the third season’s outstanding “Yesterday’s Enterprise”—I think that choice was mistaken. Tasha’s death on Vagra II is sudden and violent, but it is not senseless or meaningless, not even by the script’s own standards. “Never forget I died doing exactly what I chose to do,” Tasha says in her holographic goodbye. “What I want you to know is how much I loved my life, and those of you who shared it with me.” Tasha died doing her duty, trying to save Troi and Prieto. She lay down her life for her friends. Christians have heard someone call that the greatest kind of love, haven’t we?

Tasha’s memorial service endures as one of the most moving scenes in any Star Trek series. I don’t think this is because, after fewer than two dozen episodes, fans had developed any great attachment to Tasha—although we shouldn’t discount the impact, in the late 1980s, of seeing a decisive and authoritative woman on the Enterprise bridge—but because the scene so powerfully taps into the universal experience of grief.

Unfortunately, the scene also attempts to undercut natural and healthy feelings of loss with holographic Tasha’s “homily” about Star Trek’s vision of an “afterlife”: “Death is that state in which one exists only in the memory of others. Which is why it is not an end. No goodbyes. Just good memories.”

We do not deny the reality of death; we deny death’s power to speak the last word.

As Christians, we have a much more “sure and certain hope” (as the Book of Common Prayer has it) regarding our existence after death. Our doctrines may differ in some details about the when and the how, but we all believe not even death will separate us from God’s love in Christ Jesus (Romans 8:38-39). We do not deny the reality of death; we deny death’s power to speak the last word. We affirm that death is the last enemy to be subjected to Christ’s authority (1 Corinthians 15:26), and that Christ’s Resurrection is God’s guarantee that it will be. 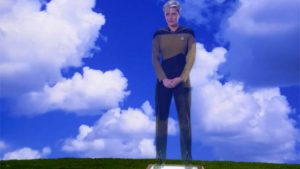 And so it’s all right to say goodbye—for now—to the loved ones we lose to death, because we believe in God’s power to give new life. This is why the apostle Paul urges Christians, not to avoid grieving, but to avoid grieving “as others do who have no hope” (1 Thessalonians 4:13, NRSV). Knowing that God will one day “wipe every tear from [our] eyes” (Revelation 21:4, NRSV) moves us to trust our loved ones who have died to God’s wisdom and care.

All that said, Christians ought not be opposed to good memories! While Tasha’s message isn’t the Gospel hope, surely we can learn from it that God wants us to make sure the ones with whom we share our lives know we love them before we are gone, and to make and cherish memories that can bring comfort and consolation while we await the ultimate comfort and consolation only God can bring, when God chooses, in God’s good time, to make all things new.

Thank you for reading Redeeming Culture!  Trektember returns tomorrow with Season 2’s The Measure of a Man, so be sure to check back for the next episode!

Previous articleTrektember TNG - #1: Where No One Has Gone Before