What is the episode about? 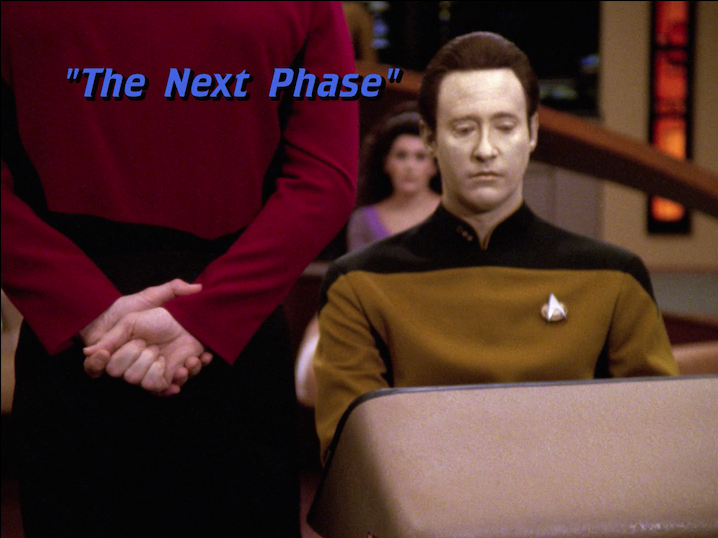 Death! Sad, bitter Ensign Ro and laid back Geordi La Forge are caught in a transporter accident, and are believed to be dead. Actually, they’re just out of phase with the universe; and while nobody knows that, including them, they appear on board the Enterprise, unable to physically interact with anything (except the floors, and please let’s give the writers a break on that one).  They listen in on conversations about them, learning how they are regarded, having passed. Eventually they manage to signal their existences to their comrades, and even save the ship at the last minute, once they rematerialize.

Why did I choose it?

Because I goofed. I thought it was a different episode. Some of these episode titles aren’t so helpful!*

Divine themes in the episode

One intended theme is how you will be remembered after you die; but to be honest, Kirk’s line, “How we deal with death…is at LEAST as important, as how we deal with LIFE.” from The Wrath of Khan says more about that topic than this episode does. The main reason is that the crew’s reactions to the loss of Geordi and Ro seem unrealistically perfunctory; they show no signs that they have just lost a co-worker, let alone a family member. Aside from momentary somberness, they react to the news with Kuleshovian blankness, and continue casually going about their tasks. Even the return of our friends at the end is not handled in a believable manner. When you’re at a funeral where there were no bodies to bury, and suddenly your mates show up, you’re not going to merely be mildly pleased at a day gone well, but that’s what we get. 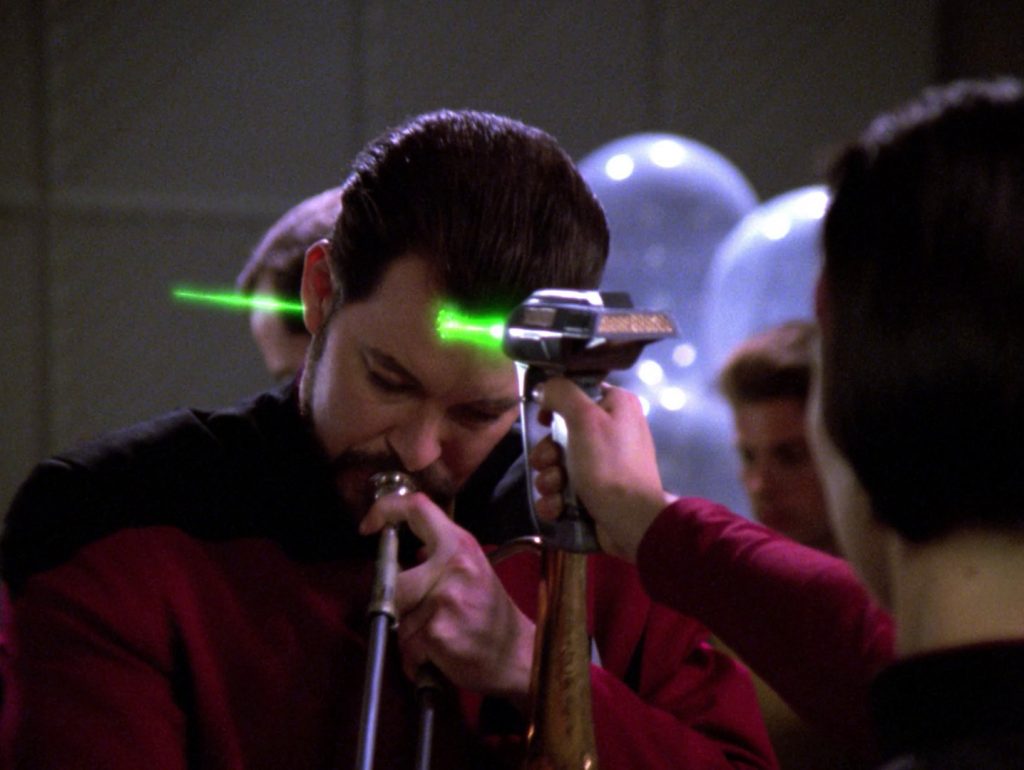 Sure, both of our phased characters get to eavesdrop on stories being told about them, but I learned more about Ro and Riker when they lost their memories and diddled, a few episodes back in ‘Conundrum’. That complaint stated, the playfulness was still a lot of fun.

Just to verify my feelings on how oddly matter-of-fact these apparent deaths were treated, I looked online and found a full review of The Next Phase on the website A.V. Club. It looks like a few years ago, writer Zack Handlen covered every single episode of this series with nice, full reviews, and he had an interesting take on this one. He saw it as an episode that works as an atheist’s fable, which I think could be right. He says, “Geordi refuses to accept what he sees without testing it, while Ro simply believes it at face value. And I like seeing it that way, because the skeptic gets to be right for once.”

While his view does not seem to be the majority opinion on The Next Phase, he’s not the only one who thinks of it this way, and I think it’s an interesting statement. I’ll agree that most of our public stories (TV and movies) dealing with “spirituality or not” issues rarely land on firmly the “not” square, but the real reason is that they tend to wimp out and not pick a side at all. Almost to a one, they end with a “maybe there’s an afterlife or maybe not, but I think we’ve all learned to be more respectful” message, neither affirming nor denying either position.

Where this one mildly picks a winner is by falling into the common trope that the atheist is usually the smartest person around. By way of example, here are some television programs where the brightest person in the show also happens to be the atheist:

This isn’t universal, but it is pretty common. I can’t think of anything nearly contemporary where the adult in the room is the theist. Father Brown, maybe?

And look, it’s not a conspiracy. Maybe some of these artists are trying to make a sly statement, but many are just portraying the world in the way they genuinely think it operates. In this episode, the always-reasonable Geordi La Forge stands in for the atheist, according to Mr. Handlen.** The theist, by contrast, is the comparatively immature Ensign Ro. That presentation, and some of the episode’s direction, including the ending, play very much as if Handlen’s assessment is on the money, so I think it’s a reasonable read.

“By their fruit you will recognize them…” Matthew 7:16

As Christians, we have to go by the facts, not just the vibe; so to be fair, given what our characters know, it is Ensign Ro who initially has the most reasonable take on their situation. They are present, unheard, unseen, they walk through stuff, and they were the victims of the type of accident that almost always obliterates people. Ro even knows that both standard and unusual transporter events were checked, and came up negative for retrieving our pair. Qualified people have declared her dead with good reasons to do so. It’s certainly weightier evidence for her conclusion than his funny quip about his visor and their being clothed is against it.

She also says that she came to her conclusion even though, to this very date, she had always regarded it as mere superstition. She was also an atheist. She’s not even specific in what she means about their state, when she talks with Geordi. She calls it dead, but the way she dances around the terminology, she’s only really sure that that they are no longer of the flesh. Really, she’s the reasonably-convinced skeptic, whose conclusion is downright Sherlockian*** until they finally discover more evidence. Her only uninformed position concerns what must follow that realization, basing it on what her culture taught her one should do in such a situation. 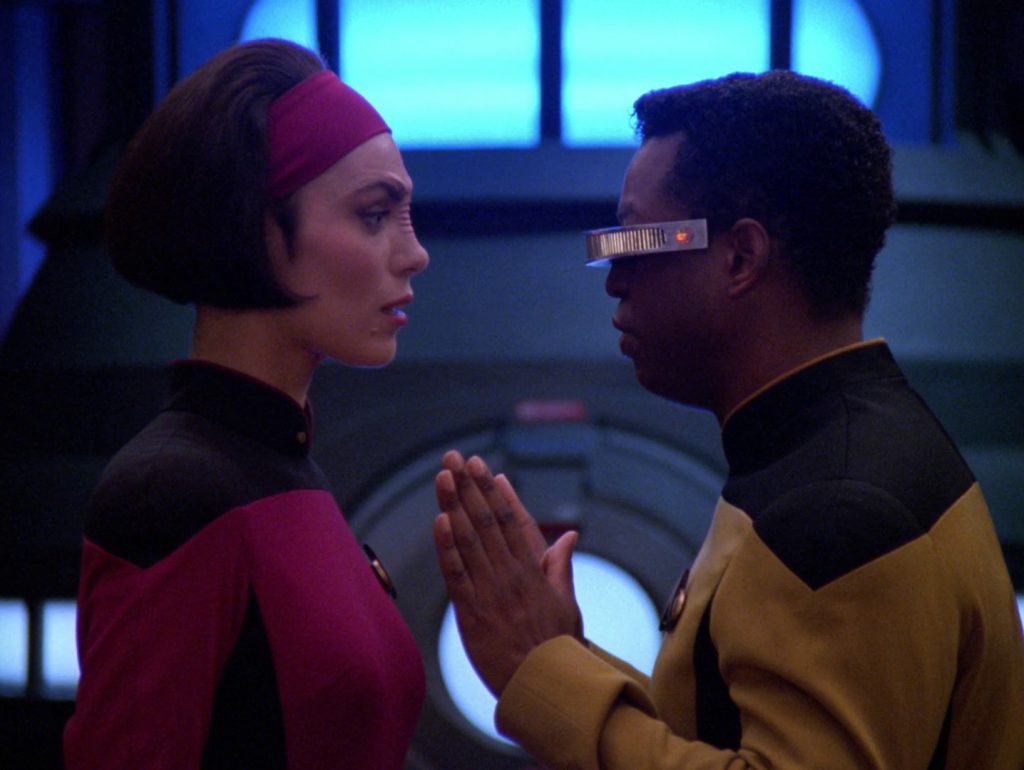 Geordi’s reaction to their state is immediately the face value one, and he’s more stubbornly committed to it. His worldview is the one which may not be challenged, as he evidences by becoming quickly agitated about the very idea when she suggests it.

His diligence in pursuing more information is definitely admirable, and his logic is sound:

RO: Why can’t you just accept the fact –
LAFORGE: Look, if you’re right then we’re dead and this doesn’t make any difference. But if I’m right, then we’re still alive and I’m going to need your help.

The line above is her sole moment of giving up the pursuit of information in the face of a conclusion she had already accepted as likely. But once he answers her, she’s fully on board. She just trails right along and helps him. There’s no crisis, nor does the change even seem to bother her, as her suggestions did Geordi.

They’re both inquisitive characters, and they both do some minimal jumping to conclusions, but hers are initially more informed. They are both skeptics, but intellectually speaking, she seems to be both more open and more careful in her thinking. At least this is how the episode’s events happen.

But I’m not sure the show believes that. The idea that Ro is actually credulous is given pretty scant evidence here, yet some do see this episode in that light. It’s not universal, but when reviewers do address the ‘religion’ vs. atheism issue, some, not all, describe Ro as the backward one, and Geordi as the genius who solves the problem in spite of her. I think that may still be a fair read because the episode even ends with her saying this, as if it is a depressing revelation:

“I was raised with Bajoran beliefs. I even followed some of the practices, but I never really believed in a life after death. Then suddenly I was dead and there was another life, and it made me feel like I’d been pretty arrogant to discount everything I’d been taught, you know? Now I don’t know what to believe.”

Her tone could suggest that she has had some crisis of faith, yet she believes what she did when the episode started, i.e. “not sure what.” She’s right that it’s arrogant to discount something without any evidence, which she had been doing, but in the end she hasn’t even really changed.

Here is the flip-side of a general thesis on Redeeming Culture, where authenticity seems to almost inevitably lead to truths: I sometimes see an avoidance of truths leading to a general lack of authenticity. As I said above, of the rest of the crew, most of these people are not acting the way humans usually do in moments of the sort. Now, it’s possible that production just dropped the ball and churned the episode out; but this was directed by David Carson, who helmed Yesterday’s Enterprise, and brought to it plenty of detail and emotion which was not built into the script (on top of what already was – terrific episode, that). Perhaps, in order to avoid giving the story’s emotional weight to Ro’s perspective, they downplayed the idea that the characters were actually dead, through the other characters’ lackluster responses.

This is only broad speculation in response to other speculation, and I certainly don’t mean to go off on Mr. Handlen. His project is wonderfully comprehensive, and he writes well and with wit. It would be a great companion piece for someone going through all of these episodes alone, without a friend with whom to chat about them. And he says little more about this issue than what I’ve quoted, so I’m really hitting at standard interpretations that occur when this sort of thing arises, where our stories portray theists as tolerably misguided, and atheists as right, but maybe it’s better to be kind. That’s a common approach, or conclusion, in our fiction, and it seems pretty lazy. I think he might be right about what the episode is aiming at, but if he is, I don’t think it works very well, maybe because it relied on too many standard assumptions instead of following certain paths in the directions they would naturally go. Theists are not always gullible. Atheists are not always thorough in their thinking. If the show tried to play it that way, then it simply didn’t accomplish it with integrity.

Thank you for reading Redeeming Culture!  Tomorrow, Mikey Fissel whisks us away to another planet with his look at The Inner Light.

** Regarding atheist crew, really one could count anyone in the Federation who hasn’t explicitly stated otherwise – so here, only Worf would be excluded from that particular brotherhood. Star Trek was never intended to be a theistic show.

*** “When you have eliminated the impossible, whatever remains, however improbable, must be the truth.” – a statement that Spock, incidentally, attributed to “an ancestor of mine.”