When the righteous triumph, there is great elation; but when the wicked rise to power, people go into hiding.
Proverbs 28:12

During, and right after, season one, many from the creative teams left the show in anger. Writer DC Fontana left during the first year due to a falling-out of sorts with Gene. “There were a lot of falling-outs involved in those years,” offered Rick Berman. David Gerrold said that, within the first season, 30 writers and staff left the show; including executive story editor, Hannah Louise Shearer.

Some did leave for less rancorous reasons. Coproducer Robert Lewin said, “The first season was a series of trials and errors and it was onerous, not only for me, but for everyone,” but his own reason for leaving was genuinely creative: “What I wanted to do and did best was character. Gene [Roddenberry] is determined to keep this an adventure show rather than a personal show, and that is essentially the reason I didn’t want to return. I really wanted to do stories of greater depth and more personal material.” And Executive Producer Robert Justman left after a year simply due to his age and the pressures. 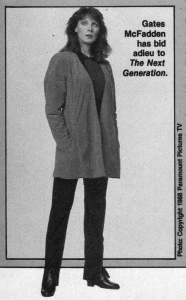 The biggest loss after season one was that of Gates McFadden. “She got fired,” explained Rick Berman. “The head writer on the show during the first season, and there was a lot of tumult on the first season, was a gentleman named Maurice Hurley. Wonderful guy. Maurice did not like Gates. He had a real bone to pick with Gates. They just didn’t get along. He didn’t like her acting, he didn’t like her… after the first season, Gene decided to step back and leave everything to me and to Maurice, and Maurice went to him and said, ‘You gotta get – please, please let us get rid of her.’ and, I – I let it slide. I didn’t feel passionate enough to argue about it.”

Looking back on it, McFadden said, “I felt that some of the writing was sexist, and I was probably too vocal about it, and I think that’s why. Ultimately, it cost me my job at the end of the first season because I was so unsavvy about the politics of a studio, and the politics of film, and how there’s a lot of people involved, and there’s a whole way you do things… I think I spoke my mind, and really pissed people off, basically.”

Patrick Stewart said, “Gates was fired, and we were, all of us, horrified. And appalled.” 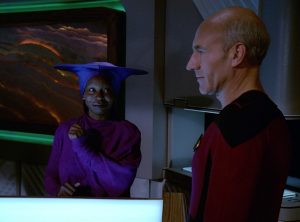 Once McFadden’s departure was announced, Whoopi Goldberg’s manager called Rick Berman to have lunch, and asked if they had recast the role of the doctor. “Whoopi just wouldn’t have worked as the doctor,” he says. According to LeVar Burton, Goldberg had been asking him to get her onto the show throughout the entire first year of production. He would mention it to the producers, but they generally laughed it off, not believing it. She was at her height as a movie star at that time. Why would she want to be a regular on a Star Trek show?

But this was important to Goldberg. Before Star Trek, there were no black people in the science fiction she saw. It meant to her that black people didn’t make it to the future, in these visions. After the meeting, Goldberg was cast, gratefully, in the recurring role of More Than Just A Bartender, Guinan. Said Stewart at the time, “It’s possibly unprecedented that a movie star with such a career should have requested a role to be created for her.” 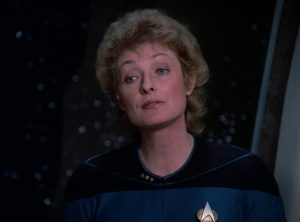 For the new Doctor, the producers called up actress Diana Muldaur, who had appeared twice in the original series, and had effectively retired from acting; but for Star Trek, was willing to come back to the set. Her vision of the character was solid: “I think Kate Pulaski’s closer to our old crusty McCoy from the early days, although I will admit that I am a woman. 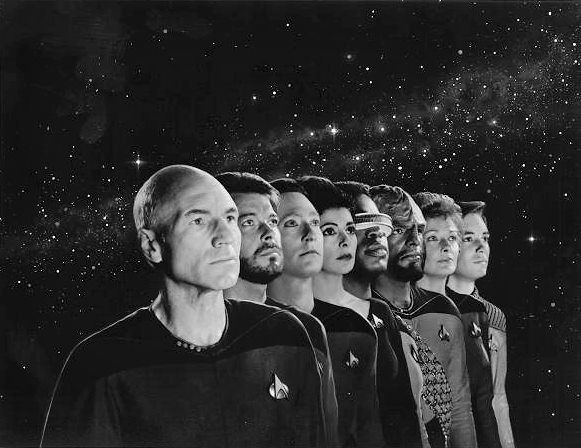 “She’s very opinionated, so hopefully we’ll stir up some hornets’ nests along the way and get people upset with her. It should be fun. Obviously, I will be at loggerheads with the Captain over quite a few things, because he’s a strong person and I’m a strong person. My area, of course, is the medicine and his, the ship, but those things will be in conflict every once in a while.” This interview with her in Starlog suggested that the character was developed with her recent acting in mind. “The way in which I was hired indicates what they were interested in, which was me, basically, who I was in A Year in the Life. So, I have a great deal to do with it. It’s their vision I’m fitting into, and due to me, I’m adding some things. It’s all coming from us, really.”

Starlog then continues narrating, “At this point, Wil Wheaton rushes up to the table with a wad of money and credit cards, which he deals to Muldaur like a deck of cards, urging her to “Say nice things about me.” She laughs, which is what Wheaton was after. From the adjoining table where he’s eating with Jonathan Frakes and Marina Sirtis, Brent Spiner, in full Data regalia, chimes in. “Did she mention me?” Spiner asks brightly. “Today, she compared me unfavorably to Rossano Brazzi — as a human being. And I had to agree.” This breaks up Muldaur (and everyone within earshot).”

Looking back on season one, Jonathan Frakes credited Patrick Stewart with “setting the tone of quality and a high level of professionalism on the set. He works very hard, but he’s also a lot of fun. He’s a much sillier man than Picard.”

He noted some of the problems too, “I think it offended fans to see Wesley (Wil Wheaton), a teen-aged boy, solving problems for the captain, and some themes do keep coming up from the old show. I think some of them are so set in Gene’s mind that they come out in a different form. I know I’ve heard a lot of complaints that we were doing rip-offs. I think that will change in the second season, now that we know where we’re going. I’d like to see Riker loosen up a little bit. I’d like to see them give him more of a sense of humor and fun — put more Frakes in Riker.”

Next article Trektember TNG - #19: The Next Phase

For gosh sakes Mary, they built this thing in Bedford Falls.
Oh, I haven’t laughed that hard for a long time!