Season one had begun as a rush job, and never even had the opportunity to catch its breath. For the various reasons I’ve cited, the writers could barely keep up with the needs for new scripts, and problems compounded from that. It had to have been a hope, looking ahead, to get a good jump on season two during the production hiatus. Usually writers would go on retreats at the beginning of a season to talk about the year ahead, create story arcs, and develop characters.

But none of this could happen because of the 1988 writers’ strike. It began immediately at the end of production on season one, lasting from March 7 to August 7, 1988. Programs can just get cancelled because of these. That delay was blamed at least in part for the eventual cancellation of even some hit shows like Moonlighting. Productions halted all over L.A. Newly planned shows could not even start, and others began their new seasons late, in November rather than September. They’re serious things, strikes. When they happen, writers do no work. There was no writers’ retreat; no getting a head start on the year to prevent many of season one’s issues. For The Next Generation, the strike led to a shorter season, with only 22 of the usual 26 episodes produced, one of which was the only clip show ever to appear in a Star Trek series, the almost universally-lowest-ranked episode of any Trek series, Shades Of Gray. 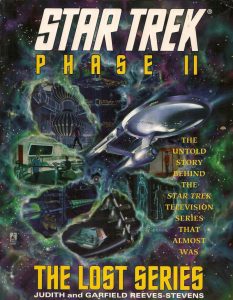 The writers’ strike also forced The Next Generation to use a script originally written for the Star Trek: Phase II series that had been planned in the 70’s. 13 scripts had been written for that production. It was to play as if it was year four of the original series, featuring most of the original crew plus three new characters. Two of those were Will Decker and Ilia (seen in The Motion Picture), and a third was a new vulcan pulled in to replace Spock, since Leonard Nimoy would not return. Its premiere episode script, “The Child,” was pulled to lead off season two. 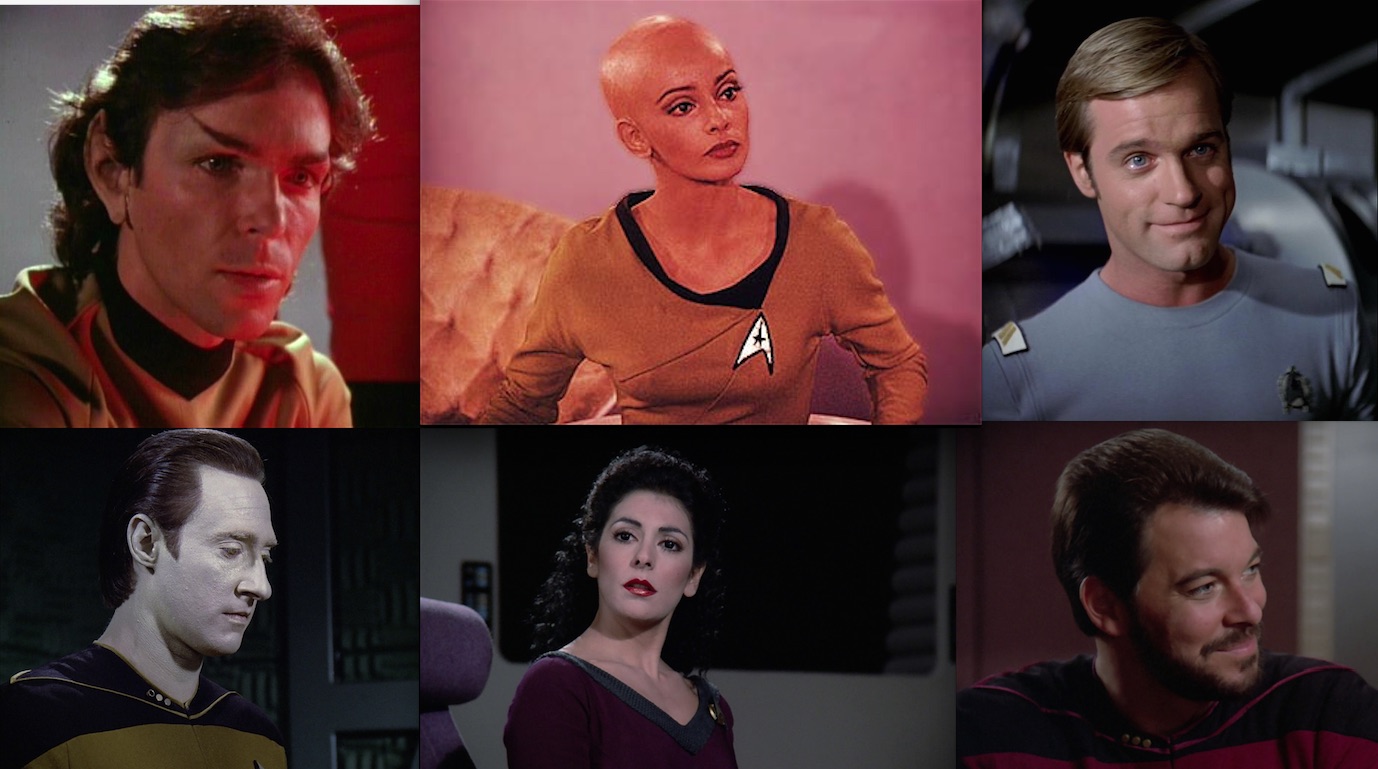 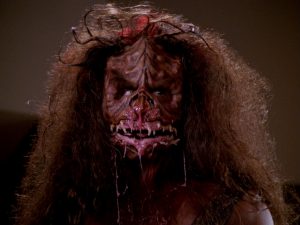 For TNG, the new characters’ lines were given to Riker, Troi and Data, respectively. Producer Maurice Hurley translated the script from the TOS cast to the TNG cast and situations, as well as incorporating introductions of the changes from seasons one to two. It was one of two scripts ported up from the fallen 70’s restart; the other being Devil’s Due, filmed much later in season four.

Starting the season off with this script turned out to be a real encouragement for Marina Sirtis, whose character, Troi, was featured in the episode. “I had had a bit of a tough time in the first season.  I’d been written out of a few episodes, and I was a little scared that my job was in jeopardy, so the fact that I was coming back in the second season, and that the opening show of the second season, which was “The Child”, was kind of a Troi show, BIG Troi show, was SO huge for me.”

Apparently, Sirtis had almost been written out of the series entirely. “They had dug that hole for themselves with me being an empath. And in November, I nearly fell into it and was covered over. Without going into that, I nearly got fired…And I am tired of sensing things. I’ve done that, gotten the T-shirt, the souvenir brooch, all the other stuff. Every time Troi opened her mouth, she sensed something.” 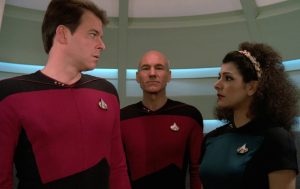 One issue that bugged both her and her costar Jonathan Frakes was the introduction of their characters as former lovers (or “Imzadi”), followed up with…absolutely nothing.

“Something must be done,” she said. “They created this relationship and then they tried to ignore it. You can’t insult the fans by doing that.”

Frakes agreed, “I’ve been asking that question. Both Marina Sirtis and I have asked. We have not gotten a straight answer, to be perfectly honest. I would be very curious to know.” Throughout the run of the show, Sirtis and Frakes did their own subtle things to keep the implication of a romance present, such as making sure to sit next to each other in conferences whenever they could arrange it.

It’s interesting how early Frakes’ interest in relationships appears, considering how well he would become known as one of the series most character-focused directors. Sometime before the show had premiered, he had said, “The key to success with this show will be the focus on the many families being on the ship together.” But by the start of season two he had changed his mind. “The scripts have not been focusing on the families in the show, so obviously I was wrong.”

He was right, but at the wrong time; and even with that, he hadn’t altogether abandoned his hope for relational focus. “I think the key to success is the ‘family’ that has developed, as in the first series, among the regulars. That family has, in all honesty, developed better than they could have imagined as a result of the casting and the camaraderie that has developed off-stage.” He even noted specific on screen friendships he thought were forming, “Certainly Riker and Data. Data and Geordi seem to be developing a friendship. Also, I’ve had a few interesting scenes with Worf where Worf and Riker have conversations that have friendship connotations.”

Patrick Stewart also expressed hope for more character time in the episodes. “The relationships of the present characters on board the Enterprise are going to change and grow. That is our incessant subject of conversation off the set. That’s what we talk about all the time. We go out to dinner after working all day on Star Trek and what do we do? For three hours, we talk…about Star Trek.” 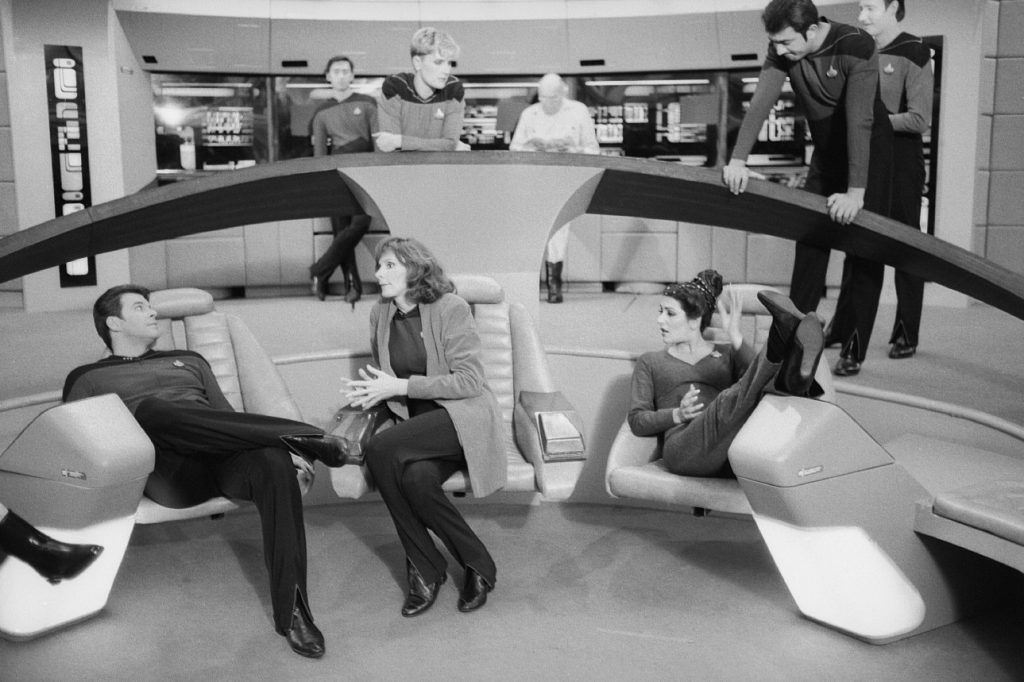 Previous articleTrektember TNG - #19: The Next Phase