Today’s episode is number 27, an award-winning piece of truly great science fiction, and perhaps the franchise’s best work ever: The City on the Edge of Forever. 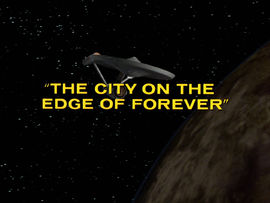 In a frenzy after a medical accident while the Enterprise is investigating a time anomaly, Dr. McCoy beams down to a ruined planet and escapes into the past.  Kirk and Spock soon note that every evidence of the Federation’s existence is suddenly gone, including the Enterprise, and follow McCoy into 1930s New York.  There, they must survive and discover how to restore the timeline; in the meantime, Kirk falls in love with a woman whose continued life could mean the future’s end.

I think this episode is so popular because of the deep, deep redemptive themes that run throughout the entire piece.

First, to kick off the episode, McCoy is pursued at great cost by the rest of the Enterprise.  His mind and heart suddenly sick, he is powerless to bring himself under control or return to the Enterprise on his own.  Instead, he is hostile and angry toward his dearest friends, lashing out against them and running away.  Thankfully for him, Kirk and Spock follow him nonetheless.

The entire landing party is an exercise in extravagance for the sake of another; Kirk risks almost his entire senior staff to save his friend, pulling out all the stops for the sake of the daring rescue.  His retrieval is clearly all that Kirk cares about in this moment.

But once they are on Earth, Kirk must then consider that “millions will die who did not die before” if they are not able to stop McCoy from making the change he will make.  Sadly, in order to save them, he must sacrifice his dearest love.

There are other concepts that reflect God and illuminate our collective love for this episode: Spock’s deep study and hard work toward learning the path forward from a source seemingly inscrutable from the outsider; the fact that the omnipotent “currents and eddies” of time have brought all of these people together; Keeler’s speech of a hope in a world beyond this one with no pain, no suffering, and unbelievable joy and fulfillment.

But I think the weight of this episode is truly contained in the costly sacrifice of love for the redemption of many.

You were alienated and hostile, cast down to live out your days separated from God and a danger to others.  Your mind was warped.  Your hope was gone.  But God, in His infinite mercy, sent His son – a gift of great worth – to save you and redeem you.  And when He came, he could not merely live well for you.  God had to allow him to die, run over by the weight of our sins so that we could be free.

Thank you for reading Redeeming Culture! Come back tomorrow for more Trektember as we look at the final episode of season 1, episode 28 of Star Trek- “Operation: Annihilate!”. But stick around after that; our season 1 retrospective comes out Friday!

This article was co-written by David Lichty (whose voice you’ll hear on a series of podcasts coming soon) and David Atwell (the editor of Redeeming Culture).