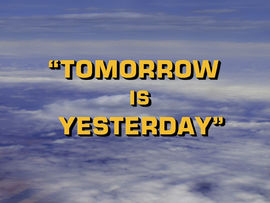 The Enterprise gets thrown back in time to the late 1960s, and are inadvertently spotted by Captain John Christopher, a curious “modern-day” pilot.  They beam him aboard to save his life, but he can’t go back and report what he saw without changing the timeline.  Unfortunately, Spock discovers, they have to send him back; otherwise, his son will never be born, and space exploration will never be the same again.

While we don’t know much about Captain Christopher before flies up to intercept the UFO which turns out to be the Enterprise, we do know that he’s a family man.  He cares a lot about his family, and that usually speaks to a desire for a strong legacy.

A lot of times, when we think about legacy, we think about some sort of large monument built to an important person, or a building gifted in someone’s memory.  But if a legacy is anything we do that transcends us, goes beyond us, then we don’t have to be rich or famous or important to have a legacy.

So what will your legacy be?

Christopher got a look at his legacy.  He heard Spock say that he would have a son; but more than that, he heard that his son made a difference.  He heard that the difference he made was fundamental to the future.  That it moved humanity toward the gleaming promise of incredible exploration, diversity, and cooperation that the Enterprise represented.  And it made him want even more to go back to Earth and make a difference.

Two men in the Bible saw a similar thing: Ezekiel, in the book bearing his name, and John, in the book of Revelation.  In both cases, they were shown a vision of heaven and the beauty and majesty of God.  But also in both cases, they were given a job to do back on Earth: to proclaim God’s glory to the world.  The message was similar to Captain Christopher’s: the charge you are given will point people toward all of this.

We all want to work for something bigger.  And when you have a glimpse of that Greater Purpose, your calling becomes clear.

Thank you for reading Redeeming Culture! Come back tomorrow for more Trektember as we look at episode 21 of Star Trek: “The Return of the Archons”.