Today’s episode is number 28, the last adventure of Kirk and Spock’s first year on the Enterprise: Operation: Annihilate! 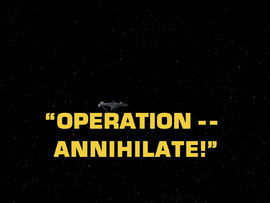 The Enterprise follows the path of a deadly madness that has swept across the stars on a beeline to Deneva, where Captain Kirk’s brother lives with his family.  Sadly, by the time they arrive, the madness has already struck in the form of massive, amoeba-like beings that infect and craze their victims, including George Kirk and his family.  Kirk will have to destroy the planet unless McCoy discovers a cure for the amoebas’ infections…which he does, but at the cost of Spock’s sight.

At first glimpse, this episode might seem like an odd one to go out on for the first season of such an auspicious show.  Not a bad episode, of course, but not particularly good, either.  But this is no mere alien menace that Kirk and co are fighting.

They are ubiquitous, lying in wait everywhere.  They are contagious, and no one is free of their influence.  They attack and dig in, becoming a part of them and driving them to do deadly deeds.  The Denevans are unable to fight them off on their own; they need help from outside themselves, and it quite literally comes from above.

But the similarities between the Denevans’ plight with the creatures and our plight with sin don’t end there.

That help from above witnesses the death and destruction that the creatures cause, and Kirk is immediately faced with two choices: allow this madness to proceed and threaten the rest of the galaxy; or kill all of Deneva’s citizens now, to keep their infection from sweeping across the cosmos.  It is a no-win scenario.

Our sin earned us death; and it wasn’t just some creature forcing itself upon us.  We willingly chose the deadly option, turning away from God in a cosmic act of treason.  We deserved death not just because of what was inside us, but because of what we did as a result; and so God was faced with the prospect of either destroying His beloved creation (us), or denying His just nature and allowing us to walk free in eternal, conscious torment apart from Him – literally, Hell.  It was a no-win scenario with two terrible choices.

In an act of profound mercy, He sent His son to walk among us, to live a perfect, uninfected life, and then to die at our hand – heaping our infection upon Himself and allowing it to crush him so that He would die but we could live.  It is literally and completely the best thing that anyone could ever do for us, and God did it willingly.

Spock is not a perfect representative for Christ in this story; he only gets blinded, and Christ dies while seeing perfectly.  He offers himself as a test, not as a replacement.  And he didn’t live a perfect life or love the Denevan people perfectly.  But this episode, with Kirk’s demands for a third option that allows everyone to live and thrive, is a good harbinger of what Star Trek will become in the future.

In that way, this episode is an excellent way to end the first season of this incredible franchise.  Finding the third option will become a hallmark of Kirk, Picard, Sisko, Janeway, and Archer.  It will drive the crews of every Federation vessel and it will become a cornerstone of the unwritten philosophy of Starfleet, which resonates with us because our God embodies it, too: there’s no such thing as a no-win scenario.

Thank you for reading Redeeming Culture! Season 1 of Star Trek is over, but Trektember still has one more installment. Come back tomorrow as we bid the month farewell with our season 1 retrospective.

Previous articleTrektember 2016 - #27: The City on the Edge of Forever