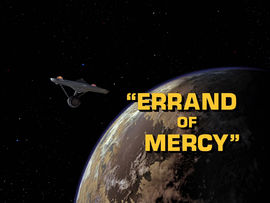 Tensions are high when war is declared between the Federation and the Klingon Empire, with Kirk and Spock quite literally caught in the middle.  On the contested planet Organia under Klingon occupation, with the Enterprise far off and the Klingon Fleet overhead, they do what they can to stop the Klingons from stripping the Organians of their lives and freedoms.  However, the local population doesn’t seem interested in fighting back; in fact, they seem quite opposed to anyone fighting at all.

The godlike Organians are very interesting, and I think they resonate with three truths about God, man, and our relationship:

We aren’t unlike the Organians in a lot of ways.  Of course, we aren’t demigods; but they are beings with an unkillable spirit; they’re called to a higher purpose, and inclined toward peacemaking, welcome, and helpfulness; and they are not afraid of destruction by evil forces, because they know that what dwells within them is greater than that in the world.

Still, we are not commanded to aloofness or maddening smiles without action.  God calls us to be in the world, even though He calls us not to be of the world.  That is, we are to rejoice with those who rejoice and mourn with those who mourn; to work for the good of the city in which we are placed, and to seek the welfare of the less fortunate.

And if, someday, we can master those things – though we would still be as an amoeba before God – perhaps then we can take our place alongside the Organians.

Thank you for reading Redeeming Culture! Come back tomorrow for more Trektember as we look at episode 27 of Star Trek- perhaps the franchise’s best work ever, “The City on the Edge of Forever”.