Today’s episode is number 25: The Devil in the Dark. 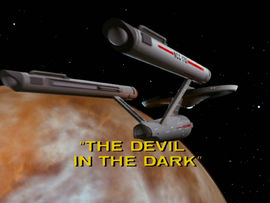 A mining operation on Janus VI, a planet rich in valuable minerals, is under attack by a mysterious creature which burns its victims beyond recognition.  The Enterprise is called in to find and destroy it, soon discovering that it is a one-of-a-kind silicon-based lifeform called a “Horta.”  Spock mind-melds with the creature, eventually discovering that it is not the villain, but rather the Enterprise crew is.

Episode title aside, the Horta is no devil.  She is simply a frightened mother, lashing out to try and stop the miners from destroying her eggs.

Legendary science fiction author Arthur C. Clarke was quite taken with this episode of Trek.  “It impressed me because it presented the idea, unusual in science fiction then and now, that something weird, and even dangerous, need not be malevolent. That is a lesson that many of today’s politicians have yet to learn.”

It’s not just politicians that have to learn this lesson.  We often have a tendency to assume evil motives for people we don’t agree with or even those we see as dangerous.  And while there certainly is evil in the world, there are two major errors one can make in dealing with the actual devil: one is to ignore his existence and attribute his misdeeds to more natural causes.  The other one is to presume that he is lurking behind everything, and thus to face the world with fear.

Neither worldview glorifies God.  And when we attack others in that fear, assuming that they are our enemy, we betray our lack of trust in God as our protector.

Your enemies on this Earth are not refugees, or supporters of a different political candidate, or even political candidates themselves that you don’t agree with.  If they are not Christians, they are simply prisoners of war; people created in the image of God who yet deserve your loving witness, even if you have to disagree with them.

Your enemies are two: the first is Satan, about whom the Bible foretells:

And I heard a loud voice in heaven, saying, “Now the salvation and the power and the kingdom of our God and the authority of his Christ have come, for the accuser of our brothers has been thrown down, who accuses them day and night before our God. And they have conquered him by the blood of the Lamb and by the word of their testimony, for they loved not their lives even unto death. Therefore, rejoice, O heavens and you who dwell in them! But woe to you, O earth and sea, for the devil has come down to you in great wrath, because he knows that his time is short!”

And the second is the sin within your very heart:

For I know that nothing good dwells in me, that is, in my flesh. For I have the desire to do what is right, but not the ability to carry it out. For I do not do the good I want, but the evil I do not want is what I keep on doing. Now if I do what I do not want, it is no longer I who do it, but sin that dwells within me. So I find it to be a law that when I want to do right, evil lies close at hand. For I delight in the law of God, in my inner being, but I see in my members another law waging war against the law of my mind and making me captive to the law of sin that dwells in my members. Wretched man that I am! Who will deliver me from this body of death? Thanks be to God through Jesus Christ our Lord!

Your only hope in this cave is not a useless phaser.  Thankfully.

Thank you for reading Redeeming Culture! Come back tomorrow for more Trektember as we look at episode 26 of Star Trek- and the introduction of the Klingons- “Errand of Mercy”.

Previous articleTrektember 2016 - #24: This Side of Paradise