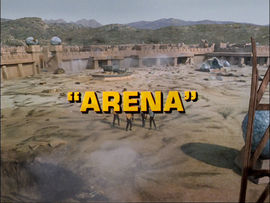 When the Federation outpost on Cestus III is destroyed, the Enterprise chases the Gorn attackers down in hopes of preventing another attack.  Unbeknownst to the crew, though, they have strayed into the territory of the pacifist Metrons – an unbelievably powerful, peaceful race who seek to peacefully stop the Federation and the Gorn from fighting one another.  So they peacefully put the incredibly strong, dinosaur-like Gorn captain alone on a peaceful planet with Captain Kirk – for a peaceful duel to the death.

Star Trek really likes the idea that to be civilized, one must be peaceful.  It’s examined several times in this very season, as well as being a major plot point in The Next Generation and Deep Space Nine several times over.  Even in our modern society, the peacemakers are revered and the warmongers are looked down upon.

Yet our hearts, as revealed through media, revel in conflict.  Even this very episode, which is largely remembered for Kirk’s fight against the reptilian Gorn and the styrofoam-rock battle.  Conflict is in the news daily.  “If it bleeds, it leads” was the banner cry of newspapermen the world over for almost the entire twentieth century.  Our culture has a fascination with death and battle.

So why this disconnect?  Why is our culture so desirous of peace but so enamored with war?

Well, first of all, we aren’t a peaceful people by nature.  Have a child and you can easily prove that for yourself, but the Psalms make it clear as well: “Behold, I was brought forth in iniquity, and in sin did my mother conceive me.” (Psalm 51:5 ESV)  We’re born sinful and combative.  Get a bunch of sinful people together in a society, and you’re not likely to have a suddenly perfect result.

Second, no matter how high we reach or how hard we try, we’ll never attain our loftiest ideals.  Even when we realize we’re failing, our resolve is not enough to raise us up.  “For I do not understand my own actions. For I do not do what I want, but I do the very thing I hate,” Paul said. (Romans 7:15 ESV)  Our society can try harder to be peaceful, but the people in it will always make war.

That’s why it’s a good thing, then, that our own power and skill are not a deciding factor in whether or not we will pursue peace.  No, I don’t mean the Metrons.  But we do need to look up to a luminous figure, to save us from our inner turmoil, besetting sin, and warlike nature.

We need to look up for peace.

Thank you for reading Redeeming Culture! Come back tomorrow for more Trektember as we look at episode 19 of Star Trek: “The Alternative Factor”.

Next article #110 - Kubo and the Two Strings and Redemptive Storytelling