Today’s episode is number 23 and our introduction to the supervillain Khan: Space Seed. 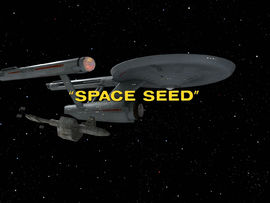 Kirk and crew encounter an impossibly-old human ship adrift in space, with living people on board in suspended animation.  The leader awakes, eventually revealing himself to be Khan Noonien Singh, a genetically-engineered superman and participant in Earth’s Eugenics Wars of the 1990s, and immediately captivates the beautiful crewman Marla McGivers.  Soon afterward, Khan returns to wake up his crew in a bid to take over the Enterprise – and eventually rule the galaxy with Crewman McGivers as his queen.

Trek’s pilot, “Where No Man Has Gone Before,” showed us a man who was elevated by a power greater than himself, but left to his own devices; this episode shows us the highest man can reach on his own, and reminds us that it isn’t high enough.

Khan and his ilk are products of Eugenics, selective breeding utilized to create stronger, smarter, faster, better human beings.  They are, quite literally, the best humans (physically and mentally) that our genes can produce.

But that doesn’t make them better humans.  In fact, the apex of humanity’s upward reach is still hungry with power, cruel, and mean.  “Superior abilities breed superior ambition,” Spock says – the greater one becomes, the more proud; then, the more cruel.  They become worse as they gain power.

When humans set out to reach toward God and build the Tower of Babel, they were not eugenically-developed superhumans, but they soon found it not only impossible but offensive to God in the progress.  Humans cannot attain God, and they make fools of themselves and anger God when they try.

We cannot reach up to God, even at our best, no matter how much effort we expend.  No, if we are to be saved…He must reach to us.

Thank you for reading Redeeming Culture! Come back tomorrow for more Trektember as we look at episode 24 of Star Trek, “This Side of Paradise”.

Previous articleTrektember 2016 - #22: A Taste of Armageddon