Today’s episode is number 22: A Taste of Armageddon. 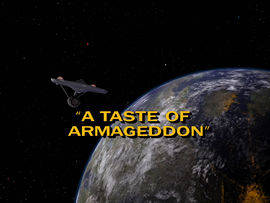 The Enterprise is warned away from Eminiar VII and told that it is at war; however, what they find there is a beautiful, manicured world devoid of bombs and troops.  They soon discover that the war is fought entirely using a computer; however, though the battles and attacks are simulated, the casualties are terribly real, with Eminiar’s citizens lining up to be disintegrated in booths when they are recorded as “dead.”  Kirk is vocally disapproving, but the Enterprise’s arrival has made it a valid target – and now a simulated bomb has “destroyed” the ship.

To the Eminiars, the concept of war is abhorrent; death, disease, and destruction raining down upon their culture, laying it low.  That is unacceptable.  But instead of stopping the fighting, they have devised an alternative: keep the war, but lose the horrors of it.

As Kirk notes, this is a terrible idea.

The Eminiars made war palatable; it’s no longer horrifying to them; and, as a result, they have decided to continue waging it.  Against a distant foe, and for a reason they don’t remember.

But even though you don’t know it, you’re guilty of the same thing: whitewashing the horrible spectre of sin through some effort.  This can come in many forms, but often it shows itself as, which means substituting real heart change with false works that approximate peace without actually attaining it; hiding our sins to make them more palatable.

We need for our whitewashed views of error to be destroyed, so that we may see our sin once more as what it is: horrifying.  Suicidal.  Filthy before God.  Insurmountable on our own.

And when He has shown us this horror show, with our fingers trembling and voices warbling, we must beg for God’s favor, and for peace between us and Him.  A peace which has been secured by the love and holiness of Jesus Christ Himself.

Thank you for reading Redeeming Culture! Come back tomorrow for more Trektember as we look at episode 23 of Star Trek and The Wrath of Khan prequel, “Space Seed”.