Star Trek celebrated its fiftieth anniversary this month. So, here on Redeeming Culture, we’ve been releasing a short review of every episode of Season One, one episode per day, all month long; for each episode, we’re writing a 3-sentence recap, a 3-word review, and (as much as we can) answering the questions “What fears or hopes are conquered or realized?” and “How does this point to Jesus or to the way God made us?”

Today’s episode is number 24: This Side of Paradise. 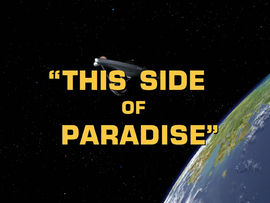 The Enterprise arrives in orbit over Omicron Ceti III, a beautiful but deadly world whose radiation kills all animal life within a week – a property only discovered by Earth scientists after three doomed colony ships were sent there.  But to Kirk’s surprise and Spock’s disbelief, the colonists greet them warmly upon arrival.  They soon discover the source of their survival: a bizarre spore that gives them perfect health, perfect happiness – and a desire to never leave the planet.

If you’re keeping track, this is the fifth idyllic planet that the Enterprise has visited, and the fifth one that has turned out to have a darker side that the crew didn’t expect.  The Star Trek universe isn’t a good place to build a perfect society.

Of course, the Star Trek universe is our universe, so it’s interesting that their experience so closely mirrors our own.  Kirk even says in the final scene of the episode that he doesn’t think utopias will ever work.  “Well, that’s the second time man’s been thrown out of Paradise,” McCoy notes, to which Kirk replies,

No, no, Bones, this time we walked out on our own. Maybe we weren’t meant for paradise. Maybe we were meant to fight our way through, struggle, claw our way up, scratch for every inch of the way. Maybe we can’t stroll to the music of the lute. We must march to the sound of drums.

He’s both right and wrong, of course.  That is the way the world works right now; we’re cursed to difficult work and painful childbearing, to strife and struggle, to sin and death.  We do have to claw our way up in this world, with full understanding that even our best efforts will fail us.  That’s what we’re left with.  But it’s not what we’re meant for.

God made us for paradise;  He didn’t intend for us to live in misery and strife all our days.  He wanted us to glorify Him, and to enjoy Him forever.  To walk with Him in the garden, and participate in His work.  To live in a harmonized life.

But no sooner had we arrived then we were tempted and fell victim to sin.  We were infected, our minds warped, and no amount of anger or self-determination would remove that infection.  And so we were cursed: cursed to struggle, cursed to pain and eventual death.  And as such, our sin keeps us from the unity we need for utopia.  Only in God’s kingdom will we live in pure, perfect freedom and peace.  Not that we should not pursue it, but we should realize that our battle’s ending is a long way off.  No utopia can work until Christ’s return.

Spock discloses this pain in a markedly logical fashion.  “I am what I am, Leila, and if there are self-made purgatories, then we all have to live in them. Mine can be no worse than someone else’s.”

Praise God that our “self-made purgatory” is only temporary.

Thank you for reading Redeeming Culture! Come back tomorrow for more Trektember as we look at episode 25 of Star Trek, “The Devil in the Dark”.