Today’s episode marks the first time Captain Kirk ever set foot on screen: Where No Man Has Gone Before. 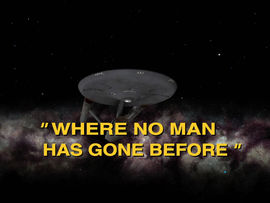 Aboard the crippled Enterprise at the edge of the galaxy, Captain Kirk’s old friend Gary gains godlike powers and begins to lose his humanity. But as Gary slides further into madness, Kirk must make the call as to whether or not he can even be saved – or if any of him even remains to be saved. Big questions and great action introduce Star Trek to an unsuspecting world.

When Kirk talks to to Dr. Dehner, he says, “As powerful as he gets, he’ll still have all that [humanity] inside him.” And so it is with us; no matter how high we reach or stretch, no matter what miracles we think we can muster of our own power, our frail humanity still drives us. Kirk is right; the nature remains the same, and our perfect selves are always unattainable. Worse still, we would lose ourselves in the attempt to achieve it; there’s even a scene of Mitchell and Dehner eating an apple in a newly-created garden to drive the point home. The curse of sin weakens us still.

But God provides a way for us to escape. That sin now lies dead, weakened by the sacrifice of Another!

Thank you for reading Redeeming Culture! Come back tomorrow for more Trektember as we look at the second episode of Star Trek: “The Corbomite Maneuver.”

Thanks for this. Live long and prosper. I’ll read every one of these.

Good to have you aboard! Glad you enjoy it.