Today’s episode is number 17: The Squire of Gothos. 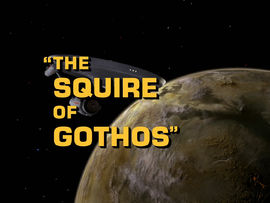 Kirk and Sulu disappear from the bridge in the blink of an eye.  The crew search for them on an uninhabitable planet, but find an Earthlike atmosphere with an Earthtlike castle instead of the volcanic wasteland they were expecting.  And the one behind both of these feats is Trelane, a nearly-omnipotent being who is, to put it frankly, an Earth wars fanboy.

We’ve talked before about how a god with a childish nature is not worth worshipping.  Spock would seem to agree, and in fact his experiences with Gary Mitchell and Charlie Evans seem to have soured him significantly on the concept of an all-powerful but capricious being.  “I object to you,” he says.  “I object to intellect without discipline. I object to power without constructive purpose.”  But as Kirk and Spock soon discover, while his power and intellect are prodigious, they are not infinite.

During a discussion, Spock points out without surprise that Trelane doesn’t know everything.  And there, Kirk hits on a realization.  “If he’s fallible, he can’t be all-powerful, which means he has something helping him.”

The Bible is clear about God’s omniscience (He knows everything) and His omnipotence (He can do everything).  And those two, while seemingly unrelated, are crucial parts of God’s nature**.

Still, with omniscience and omnipotence, it would still be possible to get a cruel and capricious god like Trelane.  That wouldn’t be worth worshipping.  And would be undefeatable.  That’s why we need a third core attribute to have a God worth worshipping, the God we see in the Bible.

That crucial element is God’s omnibenevolence (His perfect love).

Trelane has none of these things.

The episode begins with discussion of a mirage in the desert; as it turns out, that’s what Trelane is.  Without omniscience, omnipotence, and perfect love, Trelane (and any other god) is nothing but a petulant schoolboy.  Praise God that He is not.

**It may not seem like Romans 1:20 talks about God’s omniscience, but I would argue (based on the context in verse 19 which includes truth and knowledge being given to man) that part of God’s divine nature includes being all-knowing.  That is only my opinion, though, and if you can make an argument contradicting it, I welcome it; please post it below.

Thank you for reading Redeeming Culture! Come back tomorrow for more Trektember as we look at episode 18 of Star Trek: the well-known classic “Arena”.

Next article Review| 'Snowden' Shows Our Worship of Security