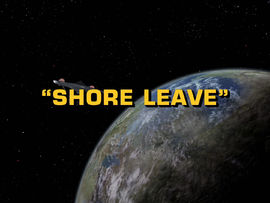 Kirk’s crew is investigating a lush, verdant, but uninhabited paradise of a world in hopes that it will make a good destination for the crew to have shore leave.  They even manage to trick the captain himself into coming down for some rest and relaxation.  But then McCoy sees a gigantic talking rabbit with a pocketwatch – and things get weirder from there.

This starts off innocuous enough, with “Alice In Wonderland” and a renaissance costume change.  But when Finnegan lays Kirk out with a punch, we see that these fulfilled wishes are far from just figments of imagination.  Danger awaits around every corner; each stray thought could result in a gory, painful death.  The desires of each crewman are given indiscriminately, from tigers to murderous knights.

It’s unclear what message this episode is aiming for (largely due to Gene Roddenberry’s reported on-set rewrite of the episode as it was being filmed), but if I were to take a stab at a message, it would be “be careful what you wish for.”  Our thoughts and desires can be dangerous.

I’m not talking about magical technology turning your offhand thoughts about samurai into real murderous robots.  I’m talking about our desire for sinful pleasures turning into temptation, and then into sin.  In 2 Corinthians 10:5, Paul warns us to “take every thought captive;” Jesus even goes so far as to tell us to remove any sinful parts of our bodies in Matthew 5:27-30.

He’s not being hyperbolic.  Sin is that dangerous.  It seeks to kill us.  But before you pull out the meat cleaver, think about this: it’s not your hand or eye that causes you to sin.  Jesus clarifies this in Mark 7.

For from within, out of the heart of man, come evil thoughts, sexual immorality, theft, murder, adultery, coveting, wickedness, deceit, sensuality, envy, slander, pride, foolishness. All these evil things come from within, and they defile a person.

The Bible goes a step further in the book of Jeremiah:

The heart is deceitful above all things,
and desperately sick;
who can understand it?

Kirk’s best solution when faced with the combined imaginations of his crew is to order them to stop thinking, but is that really a viable long-term solution?  Of course not.  And in our lives, our hearts would kill us given half a chance.  Our imaginations are dangerous.  And since the heart is what causes us to sin, that’s what needs to be removed.

Thankfully, for the Christian, God has already done that.  He has “removed our heart of stone, and given us a heart of flesh.”  You can put your knives down.

So how does that help us on this bizarro planet where our imaginations and fears torment us incessantly?

God gives us a little guidance in Psalm 37:4, in a verse that sounds like it would have fit in well on the Shore Leave world.  “Delight yourself in the Lord,” He says, “and He will give you the desires of your heart.”  But remember, that heart is a new, refreshed, redeemed heart given by God; above all else, its desire is for God Himself.

So, delight yourself in Him, and the wish for Him will be perfectly fulfilled.  It’s perfect, it’s what we need, and it’s the way God has chosen to open up His universe to us.

Thank you for reading Redeeming Culture! Come back tomorrow for more Trektember as we look at episode 17 of Star Trek: “The Squire of Gothos”.

Previous articleTrektember 2016 - #15: The Menagerie, parts I and II