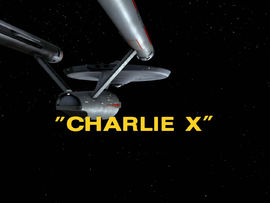 Charlie Evans is a teenager, and the last survivor of a tragic voyage. When he’s finally rescued, he meets the first humans he has known since his family died over a decade ago, beginning a learning curve that is rocky at best. But on board the Enterprise, he is surrounded by mysterious happenings wherever he goes, leaving the crew to wonder “Who is Charlie X?”

This episode gives us our first exploration in Trek of an intimate, personal god who comes to live among other humans, but the similarities to the Jesus of the Bible end there.  Instead, Charlie is the opposite of what we know our God to be; Charlie is naive and doesn’t understand the ways of our world, but God is all-knowing and wise.  Charlie is capricious and cruel, but God is loving and kind.  Charlie only cares about himself, but God seeks to bring us to Him so that we can experience His perfect joy.

Much like in Where No Man Has Gone Before, we see what happens when a weak and sinful human being is given phenomenal, cosmic powers; but instead of an evil demigod, Charlie has become an insular and self-centered demigod.  Both are images of gods that don’t satisfy, and we see again that humans are unable to be the gods that we seek to be, even within our own hearts.  We just don’t have the ability to satisfy ourselves in our own power.  Only a perfect, non-human, holy God can do that.

Thank you for reading Redeeming Culture! Come back tomorrow for more Trektember as /we look at the fifth (and, paradoxically, first) episode of Star Trek: “The Man Trap” on the actual anniversary of its airing, the fiftieth anniversary of the entire franchise.

There are a couple of sides to this in the two “It’s a Wonderful Life” episodes of The Twilight Zone. In the series, the kid whose wishes come true is an angry brat, and while he’s very young, already most of the world is missing. In the 1983 film he’s older, a genuinely sweet kid, and pretty whimsical. But he still has people trapped in terror, and has some ghastly punishments for infractions. Nice kid, mean kid, it’s not a good scenario to let a human have full sway over others. In the film version, he seems to be realizing this, and, probably subconsciously, is looking for a good mentor to whom to submit.