Today’s episode is number 9: What Are Little Girls Made Of? 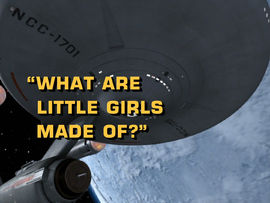 Kirk and Nurse Chapel beam down to a deserted planet in search of Dr. Roger Korby, famous scientist and Chapel’s former love who has been missing for five years.  But something is off about Korby and his team, which they soon find out is actually made up not of people, but of androids.  When Kirk won’t let Korby continue researching the process of turning humans into androids, Korby creates a Captain Kirk who will.

The old nursery rhyme tells us what little girls are made of, but it neglects to go into detail about Starfleet officers.  Thankfully, the episode makes an effort to call out the differences.

So what is it that makes a human a human?

The episode shows us that not eating, insulting friends with racist slurs, and obeying rules slavishly are highlights of androids.  But it also shines a light on something that Roger and Andrea doesn’t really believe, by the end: that androids can’t love.  And it may be that our capacity for love is our most recognizable quality, the thing which makes us different from other animals (and androids): our relationships have a capability that no other creature’s does.

God commands us to have love; it is to be the calling card of the Christian, the one thing without which we have nothing. In short, it’s a defining part of who we are as people. Other animals on this world can show affection, but not love; like androids, they’re incapable. But not humans.

At our core, what makes us human is that we love.

Thank you for reading Redeeming Culture! Come back tomorrow for more Trektember as we look at the tenth episode of Star Trek: “Dagger of the Mind”.