Today’s episode is number 10: Dagger of the Mind. 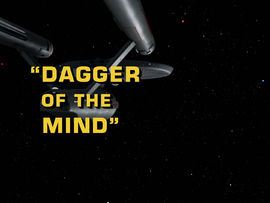 The Enterprise transfers some supplies to a prison known as “Tantalus,” but unwittingly takes aboard a stowaway.  Once captured, the prisoner is revealed to be an insane former staff member.  But Dr. McCoy doesn’t believe the prison administrator’s story about the man, and Kirk beams down to get to the bottom of things.

The world you live in is run by a madman.  A madman who doesn’t care about your life or long-term joy.  A madman who demands you do crazy things, and forces you to forget even the most crucial facts.

This madman is inescapable.  There’s no way out.   The world he runs is a prison, tailor-made just for you.  And he’s not about to let you go anytime soon.

He changes your memory.  Makes you forget.  Makes you remember things that should always be foremost in your mind.

The worst part?  The madman is you.

The Bible says that the heart is a liar.  It’ll tell you anything to get what it wants; cut you off from your friends and support, turn you into a carbon copy of the other kids, even change your memory.

Don’t listen to it.

Thank you for reading Redeeming Culture! Come back tomorrow for more Trektember as we look at episode 11 of Star Trek: “Miri”.

Previous articleTrektember 2016 - #9: What Are Little Girls Made Of?