Today’s episode is a well-loved classic, The Enemy Within. 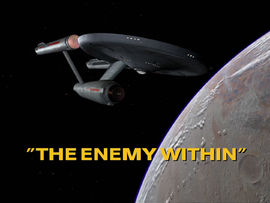 In the first of what will be many transporter accidents of the franchise, Captain Kirk is divided into two very different personas. One is weak and unsure, the other ferocious and evil, and both mere shadows of the man we’ve come to know and respect. As time ticks down for an away team trapped on the deadly surface, Kirk must literally grapple with his darker nature as his crew works to put him back together.

There are three major throughlines that illuminate man’s nature and our relationship with God here.

First of all, it’s a reminder that the sinful self lies just beneath our conscious exterior; when Kirk’s logical side is removed, his evil side immediately begins to use his rank to try and take advantage of Yeoman Rand. So too with Christians; aside from the restraining power of the Holy Spirit, our sinfulness would run rampant. “The heart is deceitful above all things,” the Bible tells us, “and desperately sick. Who can understand it?” (Jeremiah 17:9, ESV)

Second, it calls up the question of who we really are. Though the episode makes clear that both men are the “real” Captain Kirk, or at least manifestations of him, both we and the crew cannot help seeing one man as the real one and the other as the false one. So who are you? Is the “real you” the person you become when all control is stripped away? Or is the “real you” the nobler side of yourself, the one who makes Godly decisions and pursues holiness? Does our “darker side” make us who we are? Which side did God make?

Finally, the episode establishes that the “angry” half of Kirk also received his fear, in a way pointing to the reality that (unrighteous) anger often arises from some sort of fear. It also notes that decisiveness – one of James T. Kirk’s most defining characteristics – is not solely in the personality of Evil-Kirk. That particular courage comes from understanding and realization. But where it misses the mark is in realizing that such decisive understanding cannot come from our own effort; it must be sought out in and given by God alone.

Thank you for reading Redeeming Culture! Come back tomorrow for more Trektember as we look at the sixth episode of Star Trek: “The Naked Time.”  Episode 5, “The Man Trap,” was the first episode to ever air on television and will be reviewed out of sequence on Thursday to coincide with the exact anniversary of the show’s airdate.

This closely matches Poe’s William Wilson too, in that there are two individuals, not one who transforms.

It is strange that all of these tend to associate action and strength with the dark side and weakness and inaction with the good side. Even for the sake of drama construction, it would make more sense to have those qualities shared, allowing for more pitting against of one another. It is as if the authors need to justify the necessity of the dark half, so that it may be preserved, and possibly with it the vices, somewhat excused as collateral necessities.