Star Trek celebrated its fiftieth anniversary this month (yesterday, in fact). So, here on Redeeming Culture, we’re going to release a short review of every episode of Season One, one episode per day, all month long; for each episode, we’re writing a 3-sentence recap, a 3-word review, and (as much as we can) answering the questions “What fears or hopes are conquered or realized?” and “How does this point to Jesus or to the way God made us?” 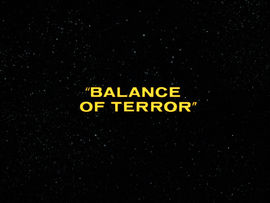 A mysterious vessel has violated the Romulan Neutral Zone, and is destroying Earth outposts one by one.  Seeking to prevent another war with the Romulans, Kirk searches frantically for the invisible vessel.  He chases his nemesis all around space, fighting racism on his own bridge as he seeks to destroy the aggressors and maintain peace with the Romulan Star Empire.

There’s an invisible power that threatens to destroy us all if we don’t get ’em first.  There’s a dark, dangerous, relentless, untoucahble villain who wants to see us dead.  But when we give in and think that the threat is another person, that villain’s cloak has successfully concealed him from us.

The Bible is clear that our fight is not “against flesh and blood, but against the rulers, against the authorities, against the cosmic powers over this present darkness, against the spiritual forces of evil in the heavenly places.” (Ephesians 6:12 ESV)  Our true enemy would love for us to focus on other humans, and ignore him.  And Satan’s weapon is truly terrible; he seeks to destroy us from the inside by stirring up the evil in our hearts and turning us against one another in our sin.

We have only one recourse; for in this scenario, we are not the Enterprise.  We are the outposts that are being targeted by the villain, and our only hope is for Another to come and save us, to swoop in and destroy our villain once and for all.

Thank you for reading Redeeming Culture! Come back tomorrow for more Trektember as we look at the ninth episode of Star Trek: “What Are Little Girls Made Of?”.

Previous article#109 - Hell or High Water and Justice vs Law