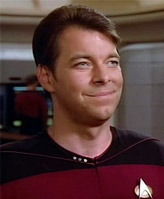 In the last piece, I mentioned Cinefantastique writing about Roddenberry’s dramatic strictures. A problem that is cited about Star Trek: The Next Generation in interviews ranging from its first year through its last, and even in the more recent, retrospective ones, is the issue of rules about conflict within the series. Jonathan Frakes said, “I don’t think, frankly, the show WAS working in the beginning. …One of the great problems with Star Trek was that Gene wanted to write – or didn’t want to write – wanted to tell stories that had a shortness of conflict. He wanted to have a sense that the family on the ship was without conflict, which is the exact opposite of how drama is made. So that alone was a challenge.”

In Gene Roddenberry’s vision, 24th century humanity has solved all of its character problems, so he would not allow deep disagreements to occur among the crew of the Enterprise. Conflict could come from outside the ship and its crew, not from within. No debates. No arguments. This went beyond merely avoiding the Kirk, Spock & Bones dynamic. It effectively meant that everyone on the ship agreed with each other about all of the important stuff. Nothing would ever really get hashed out.

Writer Tracy Tormé, who would leave during the second season, said it with the most venom in Cinefantastique, “The show’s single most debilitating conceit remains its blissful utopianism. By definition utopias are static: how do you improve on perfection? Life in the 24th century is not only too good to be true, it’s too good to be interesting. …Indeed, what this show continues to lack is a clear sense of danger — significantly, much of the new Trek is ship-bound, secure, and antiseptic. Some of the best episodes of the original left principals adrift without so much as a phaser. The new ship is too damn omnipotent, the new crew too protected and well-armed.” 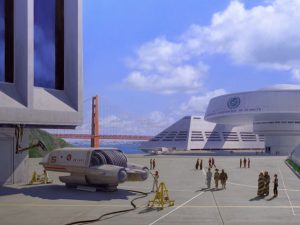 This attitude led to the scuttling of some big plans for one of its final two episodes. Torme’s script for ‘Conspiracy’ was originally designed as a thriller about a rebel movement within the Federation, but unflattering views of the Federation were not allowed, so it was turned into an invasion of Starfleet by insect creatures.

I’m going to give both sides as fair of a shot as I can here, but I can’t stress enough just how much this issue comes up. In interviews done every single year of the show, writers, producers, actors – pretty much everyone – cite how frustrating it was to see the drama hobbled by a constant lack of internal conflict. I’ll try to contain it all to this piece, but I may miss some in editing because this issue was felt deeply by pretty much everyone involved with the show for a full seven years, and for some even to the present.

Okay. But to be equitable, some have spoken up in defense of this issue.

Maurice Hurley countered, “The show has been criticized by writers because there are no internal conﬂicts. Riker does not want Picard’s seat. Geordi does not dislike Data because he has this advanced intellect. etc. Those conﬂicts and that pettiness is not there, so you can’t do THIRTYSOMETHING in space. If you were to say ‘I think I can do better,’ you probably can, but it’s not STAR TREK. If you’re going to do STAR TREK these are the rules you have to go by.”

Frakes said that “The conflict comes from what we encounter, you know, when we boldly go where no one has gone before, where things are not quite so rosy. I don’t believe we’ll have any trouble finding places, people and situations that we’ll have conflict with, in spite of our Utopian situation.”

This seems like a good solution; except that one of the show’s rules is the Federation’s Prime Directive, which disallows our characters from meddling too deeply in the affairs of other species. That’s effectively a limit on too much conflict from outside the ship as well.

Skin of Evil director Joe Scanlon, said, “I’d like to see more internal conflict and controversy, drama between the crew members, and not always have an outsider as the main antagonist. But I like what the show is already beginning to say, which is that you must have the intelligence and the courage to begin to create a new society. Wherever you go there is the human condition, as well as the need for responsibility, integrity, law and order, and so on. It’s not just one guy shooting down another guy, like in Star Wars. Gene Roddenberry’s never confided that in me, but that’s my impression of Star Trek.”

Michael Dorn also saw the brighter side: “What the Star Trek: The Next Generation cast is laying is the groundwork for a potential light year leap in the maturity level of the original Star Trek concept. There’s a philosophical tone to the first few episodes, and more than one cast member has loudly applauded the idea that their characters seem to have real substance and personality.”

Frakes adds, “We handled dramatic, traumatic, conflicted situations with ease because the writers gave us wonderful things to say. Patrick and I have always said wouldn’t it be great if we were as diplomatic as Picard and Riker are.”

I tend to agree with those who say that the conflict rules were usually a problem for the show. In fact, I often found The Next Generation to be a little stiff, dramatically. Not always, but certainly compared to the original series, which was more genuinely dramatic than silly.

But an insight that had never occurred to me, which answers that a bit, came from Seth MacFarlane in the blu-ray doc Make it So: Continuing Star Trek: The Next Generation. He pointed out that TNG ‘casualized’ sci-fi. That had really not been done much before. In most sci-fi films and tv to date, the characters had a sense of wonder about the things they encountered; not just planets new to them, but even their own robots and lasers. In TNG, all of the science fiction elements were treated like, ‘this is normal.’ We work here. We live here. This is home, and home isn’t amazing – it’s home.

I prefer amazing, but still, there is something to that.