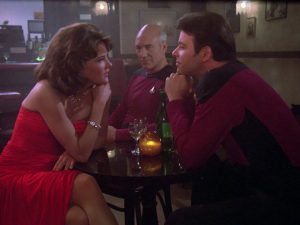 There certainly were some pretty good episodes mixed into season one. At the end of the first year, Patrick Stewart said, “My own personal favorite episode as a show is ‘11001001‘, but from the point-of-view of the actual experience of making it, it’s ‘The Big Goodbye.’” 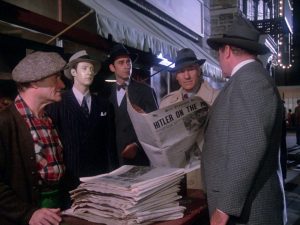 Frakes added, “It was a big favorite of us all. Those of us left on the ship were very envious that they got to go back to 1941 with their pinstripes on.” His own favorites included Stewart’s two, as well as two that he thought developed his character. “I liked Riker very much in ‘The Last Outpost.’ He faced the Portal character who had studied Sun Tzu, whom Riker had also studied. That was a wonderful exhibit of his character. 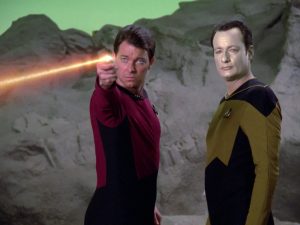 ‘Hide & Q‘ was also a good Riker story because he was tempted with the power of Q, which, at his captain’s advice, he chose to throw off. That was fun to play.”

John De Lancie observed, “The second episode I did was very good. They have a sense that they’re on the right track. You have a group that works hard and is gaining in success as they begin to see what they have. The pressure’s off, and the ship has headway now and will gain steam as people become more and more confident about what it is they’re doing. Compared to most of the crap that you see on television, Star Trek was light years ahead of it. And you have to understand that it’s still working in the same medium, with the same restrictions, the same time allotment and all that other stuff. They’re really beginning to pull things off. I know there’s a big positive difference for me between the pilot and ‘Hide & Q.’“

He was right. As season one went on, fan suspicions dropped and the series popularity rose. Rick Berman observed, “when they saw that Roddenberry’s concept of The Next Generation was a gentler, more thoughtful group of humans, who weren’t quite as quick with the fisticuffs as they were with reason, the fans, even the most skeptical of the fans, embraced the show quite quickly…Within the first half dozen episodes, these people just embraced the show, and the ratings just skyrocketed… In syndication terms, season one was VERY successful” 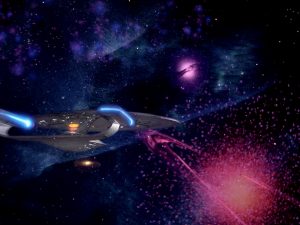 My first favorite episode would have been ‘Where No One Has Gone Before,’ because of its deliberately high science fiction quotient, being the first fully original story, and going all out in the art direction. That’s one of the things I love about sci-fi on the screen, deliberate beauty. That episode pulled out all the stops, and was a continual visual treat.

In it’s first of many expanded issues covering the series, the notably honest, and occasionally irascible, Cinefantastique wrote, “Even with Roddenberry‘s dramatic strictures in place, the first season produced some fine episodes, notably ‘The Big Goodbye,’ ‘Conspiracy,’ ‘Where No One Has Gone Before,’ ‘11001001,’ and ‘Heart of Glory.’

Said [producer Maurice] Hurley, “The second half of the ﬁrst season was great. If we could have kept on that roll I might still be there. It was just rocking, too much fun to believe. There were problems, people yelling and screaming, but it didn’t matter. We were all pulling on the oars and driving for the same goal. Everybody was busting their butt and it was great fun. lf we had been able to kick in and keep going second season there would have been no telling.”