Our very own Ryan Earnhart keeps us rolling with this article about season 3, episode 16: The Offspring. 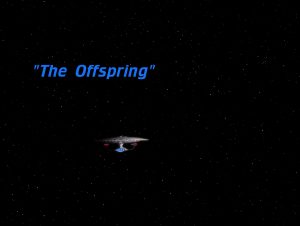 I chose this episode because Data has always been my favorite Star Trek character.  His confusion as an android about human behavior and customs was always entertaining and thought provoking—about things that we take for granted all the time.  A childlike charm questioned in rigid speech with grown up language never failed to keep my interest, as a child watching the show almost entirely because my dad was watching.

In this episode Data has found a technology that would allow him to kind of “copy-and-paste” his own unique neural pathways into another android shell, and it leads to all sorts of questions and themes, ideas that have followed Data throughout the series crammed into one episode! 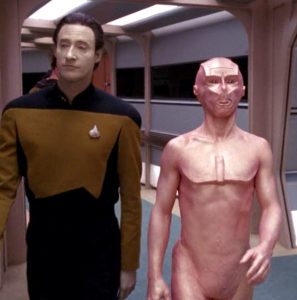 Data is inspired to procreate because he sees the beauty in himself that was made by his own creator, which reflects our own inspiration as artists.  We see the beauty that our creator made around us or in ourselves, and want to make some of that on our own.  Sometimes that takes the form of a painting or gardening or even procreating.  The obvious distinction is that Data points to an inventor as his creator and we know ours to be God, but the connection is no less poignant.

This new life he’s created gives Data a job he has never had before, and has some of the crew and Starfleet questioning whether he is ready for his biggest task ever: being a dad.  Data does seek out counsel on some of the tougher parts of child rearing, and worries openly about his ability to “love,” which here shows the distinction of feeling love and actually loving.

Lal is in an enviable position when she comes to life.  There is a portion of our own society who would love to be able to choose their own gender and race or, in this case, species.  But Lal doesn’t choose this later in life, she chooses right away and mostly chooses to try and fit in.  Unfortunately, her: amount of knowledge, outer appearance, and lack of experience lead to not fitting in anyway.  She doesn’t understand social cues enough to interact well with peers of equal aptitude, but she also frightens children of equal social knowledge.  She even steals a kiss from Riker, trying to do what other people are doing.

There is a deep-seated need in all of us to belong and be loved as we are. Just like when we seek it among other people, Lal is let down in her search.  For us, our creator steps in and tells us we are loved and accepted and belong while we are still acting as His enemies; but Data is still trying to figure out this whole creator/Dad thing and is not sure he can love.

Then, at other times, she excels beyond Data’s achievements and they can celebrate together when Lal uses a contraction for the first time.  But that was just the start—because then she starts to feel emotions!

Emotions are a powerful thing. They can motivate us to do all sorts of things: start exercising, weep in public, stay by another person’s side for the rest of our life, take someone’s life, or even lay down our own.  These powerful feelings are what lead to her own deterioration; but not before she confesses her love for her father and creator Data.

Her short life really is the Christian experience on super fast-forward.  We’re born and try to fit in with the people and society around us, but end up coming back to our creator to learn how to love. 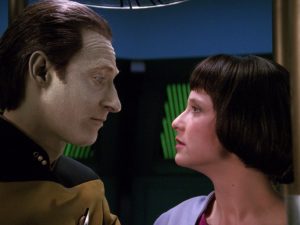 Finally, check out what “faultless religion” looks like on Star Trek.  In the book of James, we’re told that true religion is to look after orphans and widows in their distress.  The important thing about these two groups of people was that in their society they had little to no rights and couldn’t really change that for themselves.  Men were the only land owners, so a woman without a husband had nowhere to live; and an orphan had no family or way to acquire land until they grew up, if they were lucky enough to be born a male in the first place.  The androids are the ones that Picard has fought to get rights for and is defending them throughout the episode even with risk to his own job.

So what does the “pure religion” look like in your life? How can you be like Picard (and Jesus) in defending those who need your defense?

How can we learn about the feelings and desires that our Creator gave us, and experience them more fully?

And how can we participate in His creation?

Thanks for reading Trektember on Redeeming Culture. Resistance is futile tomorrow with our review of The Best of Both Worlds. See you then!