Star Trek: The Next Generation is thirty years old today!  All month, Redeeming Culture has assembled the finest crew of culture redeemers from all over the internet to investigate the spiritual harmonies in this cornerstone of science fiction; and today, we’re finally going to the beginning with Mike Poteet’s review of the very first episode, Encounter at Farpoint. 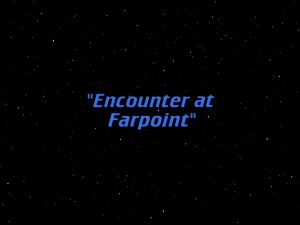 By no means is the maiden voyage of the Enterprise-D the best episode of Star Trek: The Next Generation. It feels too long (the saucer separation and manual docking sequences slow the action to a crawl). The actors don’t give terribly convincing performances (excepting Brent Spiner, who makes an immediately compelling Data; and brilliant guest star John de Lancie). And the much-vaunted “mystery of Farpoint Station” doesn’t prove very “challenging” once the crew gets around to investigating it (especially when compared, from an in-universe perspective, with the time-space continuum conundrum Q sets Picard to solving in the series finale).

Even so, I harbor a fondness for “Encounter at Farpoint” because its premise grabbed me so forcefully when I first heard it. My best friend excitedly called me one day during the summer before TNG debuted to tell me what he’d just read (on a CompuServe forum, if memory serves) about the plot: “An alien’s gonna put the crew on trial for the crimes of humanity!” My exact response was, “That sure sounds like Star Trek!” 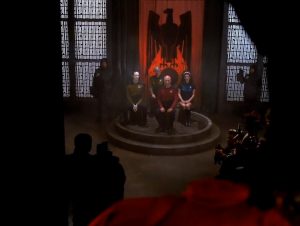 I’m still most drawn to that trial scene. It is a quintessentially Star Trek moment. When faced with a seemingly superior being, humanity’s representatives see it for what it really is: a “self-righteous life form…eager, not to learn, but to prosecute and judge anything [it doesn’t] understand or can’t tolerate.” In the presence of such pretension, Picard and his officers sit down—a deliberate refusal to give respect. Humanity sees through the alien charade, and refuses to play along.

It’s one of Star Trek’s many affirmations of the human race’s innate dignity, even nobility. Star Trek refuses to write humanity off, as Q does, as “a dangerously savage child-race.” It does not deny, any less than Picard denies, that “humans have been savage” in the past—”We humans know our past, even when we’re ashamed of it”—but it never accepts that past as the last word on the species. We have made progress, says Star Trek, and we can make still more, if we choose. 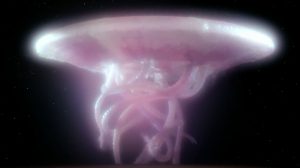 The rest of the episode makes good on Picard’s promise that he and his crew can show evidence of human growth and progress. Once the truth about Farpoint Station becomes clear—that the structure is really a massive, imprisoned shapeshifting and mind-reading alien—Picard refuses, despite Q’s provocations, to view either it or its mate as worthy of anything less than the dignity and freedom on which he insists for his own species. Picard does unto these enigmatic, never-to-be-seen-again aliens as he would have Q to do unto humanity: he treats them with compassion and respect.

I admit that, as a Christian, I’ve always felt a little uncomfortable when Tasha vehemently tells Q that he and his court should “get down on [their] knees to what Starfleet is, [and] what it represents.”  Arguing for human dignity is one thing; exalting humanity as an object of worship is something else. And Star Trek does, sometimes, stray too far in that direction for my theological tastes. It will happen just a few episodes from now, for instance; during Q’s second appearance (“Hide and Q”), when Picard recites Hamlet’s ironic speech with firm conviction: “What a piece of work is man…in action how like an angel! In apprehension how like a god!” 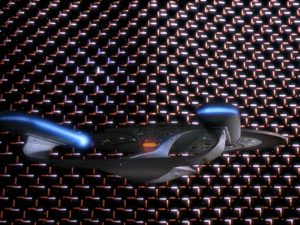 Attempting to claim divine status for ourselves was our primal sin; we believed the serpent’s lie in Eden, “You will not die…you will be like God, knowing good and evil” (Genesis 3:5, NRSV). Instead, we became confused, almost hopelessly so, about the difference, and we have all fallen short of God’s glory (Romans 3:23).

Is Star Trek generally, and “Encounter at Farpoint” specifically, too bullish on human potential? Is it too comfortable in its assumption that, were we tried fairly in a court where a true supreme authority presided, we would not, in fact, “be damned for what we really are?” Does it gloss over that past evidence of human savagery too quickly in order to argue humanity’s bright future? 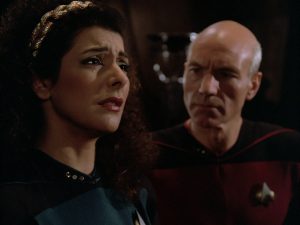 Perhaps. I can’t think of too many moments in the franchise that bear out the truth of Jeremiah’s words, “The heart is devious above all else, it is perverse—who can understand it?” (Jeremiah 17:9, NRSV). It certainly never accounts for human goodness, kindness, creativity or any other virtue as evidence of the Holy Spirit’s work, even though apart from God, “there is no health in us” (as the Book of Common Prayer says).

When we stand before the true Judge, and a full disclosure of our own ugliness is made, we will indeed find a merciful court because Jesus has accepted judgment in our place.

But we who are in Christ know no condemnation (Romans 8:1). We believe that when we stand before the true Judge, and a full disclosure of our own ugliness is made, we will indeed find a merciful court because Jesus has accepted judgment in our place. And he has not done so grudgingly; he has done it freely and willingly, in obedience to his Father in heaven and out of love for us.

I cherish this teaching from the letter to the Hebrews: “Jesus is not ashamed to call them brothers and sisters” (Hebrews 2:11, NRSV). Why? Because we are made in the image of God, and he himself is that image (Colossians 1:15). When Jesus looks at us, he sees that image. He looks at us and sees, despite our sin and fallenness, how very much we look like him; because we share the same Father. He sees our God-given potential to be good, kind, creative, and all the other virtues Star Trek sees in us—love most of all—and he empowers us to conform more and more to that image, more and more to his image. 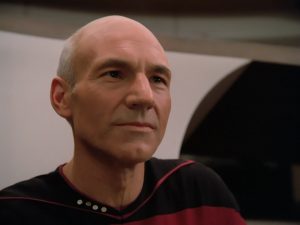 And that’s the theological reason I can’t get enough of the trial in “Encounter at Farpoint.” It reminds me that, by God’s grace, I am not found guilty, but am set free, like the crew at the episode’s end; to go and “see what’s out there” to do for God’s glory, and to see who’s out there to love and to serve—to grow to look more like Jesus, and so more like a real human.

Thank you for following Trektember on Redeeming Culture!  Tomorrow,
David Atwell takes us at high warp to the other end of series with the season finale,
All Good Things.

Next article Trek Backstory, part 23: Season 7… was NOT the Best Ever