Redeeming Culture’s Ryan Earnhart is back for season 4, episode 3: Brothers. 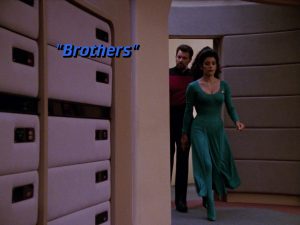 Before I go any further, the enjoyment of this particular episode would, I feel, be much diminished without a bit of mystery during about the first third; so, again, spoiler alert! I suggest watching the episode before reading this article. Also, there is definitely some overlap in the themes of this episode and “Family” that came before it, so I will just cover the new ones or the ways they may be different from the ones in “Family”.

As I’ve said about another episode, Data is my favorite character in Star Trek; and this has him at the center of the plot and in full focus. 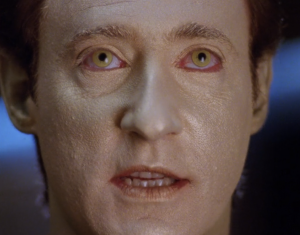 So the story starts and ends with young boys on the ship that are brothers.  One’s practical joke puts the other at risk of death unless they can get to a proper facility in time.  But the more interesting story revolves around Data finding out his inventor is not dead (yet), and neither is his older brother Lore.  The inventor is dying and wants to see Data before he dies; but was unaware that Lore was functional enough to have ever returned to the homing beacon. 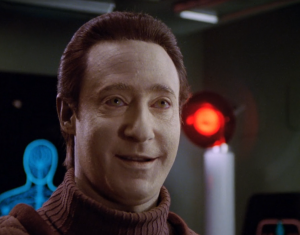 The mysterious part of the episode really doesn’t offer much in the themes and topics department so we’ll skip to when Data meets his maker.  He doesn’t recognize his “father” at first because of aging, and Data had no idea that he could be alive.  There are two questions I get from this:

A couple of heavy ones there, but worth the time and effort to really explore and discover those answers for yourself. 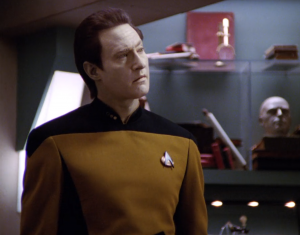 Next, the doctor quizzes Data on some of the things he typically would ask someone else.  Why are humans fascinated with the past? (see last episode) But he ties the conversation into a need for continuity and immortality, even to the point of suggesting procreation is for this reason (see the other Data-centered episode, “The Offspring”).  Since the other ideas and themes were in previous episodes, think about this: do you think that it’s ok, or feels more ok, to die- if there is someone/something that is going to live on for you?

The development of plot with Dr. Noonien Soong is pretty complex, with both androids feeling inferior to the other, either in design or their father’s good favor.  So here’s some things to think about their situation:

In true Data fashion, the episode asks more questions than it answers. Let’s not run from those questions.

Thanks for reading Trektember on Redeeming Culture. David Lichty returns tomorrow for a look at a very family-focused episode: Reunion. See you then!

Next article #145 - Star Trek: The Next Generation 30th Anniversary Panel

“Are we unable to recognize something when we don’t believe it can exist—even if it’s in front of us?”

But this other one has an excellent answer, so I’m going to run right into it: “…do you think that it’s ok, or feels more ok, to die- if there is someone/something that is going to live on for you?”

If God exists, and He does, then it’s ok to die because it is not even an end, but transitions us to Him, if we have accepted His gift of salvation. That’s a good that outweighs most things, good or bad. If God did not exist, then our lives would only have meaning while we lived them. Thereafter no meaning would matter, because there would be no us to even have the meaning. Someone’s living on for me would have no positive effect on me, because I would be gone, unable to be positively affected. Once I was dead, absolutely nothing could matter to me. And before I died, wishing to be lived for once I was gone would only be an expression of my vanity, something not likely to be satisfied so easily, or, so satisfied, to overcome all the anxieties impending death would arouse.

The question reminded me of Star Trek: The Wrath of Khan, in which Bones gets this notion wrong, as many do in fiction. After Spock’s funeral, he says, “You know, he’s really not dead. Not as long as we remember him.” He wasn’t speaking prophetically about his role in The Search for Spock, because at the time, Nimoy was genuinely believed to be done with Star Trek. If it was for anyone outside the world of the film, his line was for the fans, but within it, friend to friend, he simply was wrong. Spock was dead. He would never be there to help out again. He would never need help again. He would never be able to listen again, and respond.

If you think of me, remember me, or imagine me, I do not transport to your location. I remain here, typing this comment, and thinking about little other than it as I do. If you guess what I would say if I were with you, you could be wrong. Absence is a genuine thing, and death is a real cost. Bones’ platitude is not only insufficient, it even denies the importance of the person. If it was even close to true, we would never even miss people when parted for long stretches of time, unless we developed amnesia. But we do miss them. Reunions are wonderful because we do – how much more our coming resurrections?

We’re more than memory generators, and much more valuable than the impacts we make. Jesus did not die for my accomplishments. He died for me.

Excellent answer! I would offer, however, an anecdote from my own experience. I once asked an atheist from Taiwan what he thought happened when we died and what the point of life was to him? He said that we experience nothing in death and that how people remember you is the only thing that matters, the memories. So while I completely agree it’s based on vanity and it won’t quell all fears and anxiety about death – it may make death a little “more ok” to some people.

Yes, I think that is how the opposite of my answer is experienced, and how it seems to bring a comfort..

In trying to explain away some scriptural references to people who seek God (in light of a verse, and the Reformed doctrine, which say that none do), I believe it was Thomas Aquinas who said something along the lines of this, that these seekers are not actually seeking out the God who is, along with being good and loving, also holy, just (even against our crimes), and sovereign. What they seek is the things of God, the blessings, maybe the promises, such as eternal life, or perhaps the Great Thing that makes the world make sense. Something that comes from God, such as a truly just society, or someone having deep love of your true self, things that might even *only* come from Him, these are what so-called God seekers actually seek, he said.

I don’t know that I buy that as the full answer it intends to be, but it is a great insight into the human condition, even *if* it does not apply universally. So may it be here, where those who think they are simply going to wink out, to altogether stop being, are reaching for the only thing that comforts the feeling that we ought to continue – legacies and monuments. It’s that feeling, though, that betrays the mistaken view. I don’t think materialism and evolution can explain the sense that just ending, as a being, is wrong, with much adequacy.

Yet, your Taiwanese atheist has given it enough thought to come to a well said conclusion. To some degree, he has experienced a sense that what happens after he dies will matter. To consider, let alone put energy toward, how we will be remembered could be a twist on our innate recognition of final judgment, knowledge that someone will decide what kind of person we were. Much legacy management is about narrative mop-up, trying to look better than we really were for the sake of human memory, or history. For those who accept God’s existence, our evaluator is One who knows who we are deeply, such that whatever legacy we try to construct, He will see through it. If we want to be judged well, we have to actually be internally decent.

While even the Reformed recognize that we can legitimately strive for blamelessness, and be judged in part on that, we will never have been, nor become, sinless, and we’re judged on that too. Enter the Gospel, direct from the belief that how we’re remembered even might matter. Fortunately, we’re saved from the due results of our correctly poor evaluations by acknowledging the full, impeccable spiritual merits of the real, historical Jesus of Nazareth, who verifiably both claimed and demonstrated himself to be God walking this Earth… and by accepting His trade-off. He paid my prices. My legacy really needn’t matter to me at all. If it’s rotten, and that might be completely accurate, not only shouldn’t I whitewash it, I don’t need to.

How people remember me after I’m gone doesn’t matter (by comparison at least), not because human frailty makes memories untrustworthy. It doesn’t matter even if they get it perfectly right. They are not my true judges.