Our very own Ryan Earnhart keeps us rolling with this article about season 4, episode 2: Family. 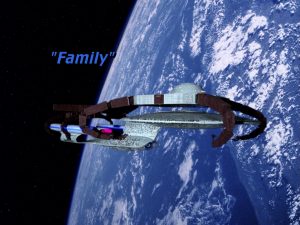 I chose this episode because, up to this point in the series, Jean-Luc seemed to some viewers as almost superhuman in a robotic way; almost untouchable or unrelatable because of his composure and devotion to the Enterprise and Starfleet.  On a show that has aliens everywhere and an android that is literally standing next to him asking his advice about being more human, this shows how cold and uptight his character could come across.

That is, until The Best of Both Worlds, where he was taken over by the Borg and lost all control.  This episode follows that up with the question, “What will Picard be like from here after?”—because the show could just act like it all never happened, or it could let the events make an impact on the show and the stories going forward. 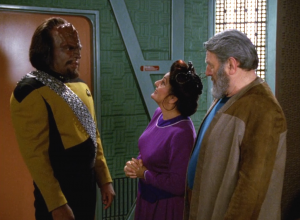 So the crew of the Enterprise are orbiting Earth for shore leave to repair the ship after the encounter with the Borg.  Worf gets a surprise visit from his human parents, Wesley gets to see a recorded message from his now dead father, and Jean-Luc visits his childhood home in France where his brother, nephew, and sister-in-law live.

I have to admit that Jean-Luc’s first interaction with his nephew reminded me of the beginning of the Lord of the Rings movies with Gandalf and Frodo, and I couldn’t shake it the rest of the episode.  So if you ever had a Lord of the Rings-Star Trek cross over fantasy, I think you could make it happen with a little imagination in this episode.

The main theme that carries most of the episode is parenting.  Worf’s parents have a talk with the barkeep on the ship about raising Worf in a way that he could investigate and embrace his Klingon heritage as much as he wanted, so he could chose his own path.  Robert, Jean-Luc’s brother, is having a struggle with his own son who is interested in Starfleet and new technologies, while Robert would prefer his son follow his footsteps and stick to the “old ways”.  Then Dr. Crusher is concerned about giving Wesley the holorecording his father made for him when Wesley was a baby, because of the effect it might have on him.  How do you think Godly parents should raise their children?  How does God raise His children? 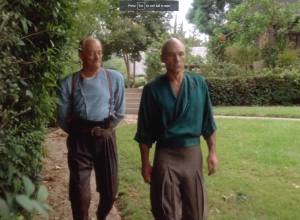 Another idea thrown around is arrogance and achievement.  Robert is constantly using Jean-Luc’s achievements as an insult, and grounds for bickering.  Jean-Luc is on the defensive throughout the episode, to prove to his brother that he did not and does not care for recognition of anything he has accomplished.  Possibly a more recent development over things he considers failures related to the Borg?  Stick through the whole episode to see Jean-Luc end up rolling around in the mud!

Finally, the point the writers had to deal with in the episode was how Jean-Luc would deal with his post-traumatic stress.  He has already been through therapy with Deanna Troi, to the point that he no longer has nightmares.  But even she wants to question him about why he would head home now, when he’s never been compelled to over 20 years of service in deep space. (Of special note to the series, Jean-Luc is not one to consider leaving Starfleet; but in this episode he actually plays with the idea.) 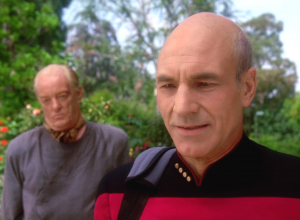 We will all meet people with some type of post-traumatic stress, whether they’ve been in a war, or abused by someone, or just been in a severe accident that has left them shaken.  Jean-Luc is actually taking steps to get better and decides to head home, knowing that his brother is not his biggest fan.  During the episode, imagine where you would go after a horrific event; where is your “home?” And how do you help someone who has been through something like that?  Are there characters who did anything right or wrong by Jean-Luc after his ordeal?

The pain Picard experiences isn’t a little thing. Don’t let it pass by- in this episode or in the real world.

Thanks for reading Trektember on Redeeming Culture. Ryan returns tomorrow with a review of a smaller part of a family: the very next episode of TNG, Brothers. See you then!

The Next Generation has three contenders for Best Season, four through six, and this one would get my vote. I used to think it started with Family, and it mostly does, but I think it bleeds back a bit into Best of Both Worlds part 2. Family names it though. Along with those two, Brothers, Remember Me, Reunion, Future Imperfect and Data’s Day, all from the first half of the season, bear the marks of a crew who are warmly comfortable with each other*. That ease made the show less declarative and more relaxed and welcoming, like it had gained the gift of hospitality in some weirdly applicable way. The brotherly conflicts in Family and Brothers were by-the-numbers fare for television, but they were handled so well. The way people disagree with Dr. Crusher in Remember Me, as the universe changes around her, should be frustrating, making them the antagonists, but it’s so clear how much they care for her as they correct her that the antagonist remains the situation. That’s not easy to do. Reunion is basically a torrid intrigue melodrama, but instead it just plays so personally.

You could isolate the episodes into sets, such as the Klingon episodes, the puzzle episodes and the comedic episodes. Whatever group name would include Lower Decks, which most successfully relies on character, friendship and presence to be interesting, that group could include all of these episodes.

* Suddenly Human, Legacy, Final Mission and The Loss may do as well, but they’re less fresh in my memory.