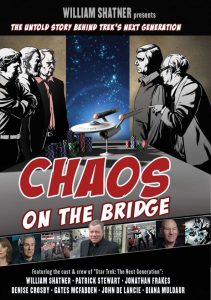 The title of William Shatner’s documentary about TNG’s chaotic first season may have it exactly wrong: Chaos on the Bridge. The offices where Roddenberry, Berman, the producers, and the writers bickered their way through the first season was a place of rancor; but across the street on the set (including the Bridge), things were quite different.

The good person out of his good treasure brings forth good…
Matthew 12:35a

With all humility and gentleness, with patience, bearing with one another in love, eager to maintain the unity of the Spirit in the bond of peace… Let no corrupting talk come out of your mouths, but only such as is good for building up, as fits the occasion, that it may give grace to those who hear.
Ephesians 4:2-3, 29

Above all, keep loving one another earnestly, since love covers a multitude of sins.
1 Peter 4:8

A joyful heart is good medicine, but a crushed spirit dries up the bones.
Proverbs 17:22

Those verses are about much grander things than mere interpersonal positivity, but they can be said to broadly describe the fabric of the universe as God has set it up; and one thing about production went well right from the start, and then stayed that way for seven years. Everyone on set really got along well. 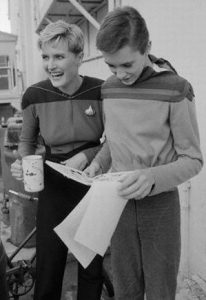 The cast conviviality was not a figment of publicists. They liked each other quickly, and genuinely. They liked working with whomever, but mostly enjoyed being all together, on what they called Bridge Days. They supported each other, not only coming on set to do off camera dialogue for each other, but even filling in with off camera looks. They also came to watch each other work when there were great scenes to do. The extent of camaraderie was shocking even to Kate Mulgrew from Star Trek: Voyager. The cast discussed this in 2012 in the 25th anniversary reunion interview on the blu-ray.

“We had a reputation of being the nicest show to guest with in town,” Stewart said in 2002, for instance

“The people on Star Trek: The Next Generation approach their work very seriously, but they’re still fun and relaxed. When I go there, I know I’m really going to work and it will be an enjoyable experience,” John DeLancie said in 1988.

The cast and crew are quite candid about the downs as well as the ups in interviews, and I could find none undermining the notion that goodwill on the set was the rule from the start; and it went beyond just the cast.

In 2002, Stewart also spoke about how things like being able to call Rick Berman up to talk about an episode kept the show alive for him. Frakes, too, spoke about driving onto the lot and thinking he just had the best job ever because of the people he was going to see – not just the cast, but behind the scenes too. Even in 1988, Gates McFadden said, “I’ve been lucky in that there has been a great spirit of collaboration between the people handling the props and myself. We’re constantly brainstorming about how things should be done medically in the 24th century. Where we’ve had the time, we’ve actually sat down and devised specific functions for the things I use on the show.” 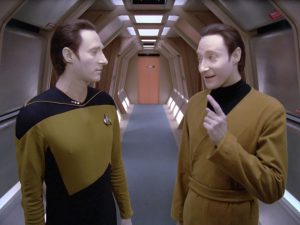 The cooperation on the set might have even saved one of the first season’s episodes. Director Rob Bowman was assigned to direct an episode called “Datalore“: an evil twin story full of plot holes, with a script no one wanted to get stuck shooting. Having two Brent Spiner characters in so many scenes would increase the shooting schedule, and risk needing silly shots like the ones with poles running down the middle, to hide a split screen. “I knew I was in trouble when the producers told me my challenge was to take a piece of $#!+ and make it into a good show,” chuckles Bowman. “But, Brent and I got together and said, ‘We’re going to show them. We’re going to make this the best episode of the year.’ …Brent [Spiner] would play Lore with all his characteristics and just drill the character. Then, he would disappear from the set to get his makeup changed and would come back in and nail Data for the same scene.” Bowman also got clever with the camera, and together they turned “Datalore” into one of the first season’s better episodes.

Previous articleTrektember TNG - #9: The Best of Both Worlds