Today’s episode is number 21: The Return of the Archons. 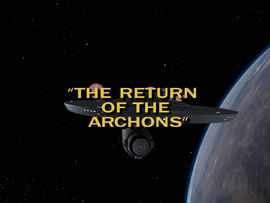 In search of answers about what happened to the starship Archon a hundred years earlier, Sulu and Crewman O’Neil are brainwashed into the worship of Landru.  Kirk and team ccome to the planet to find answers right before a riotous “festival” begins, and in escaping befriend some of the only dissenters about Landru’s divinity.  McCoy is soon brainwashed as well, before Kirk manages to find Landru – a computer attempting to maintiain perfect order, which Kirk talks into destroying itself.

Landru’s will is peace at any cost.  But humans don’t always play along.  As we discussed in “Arena,” we have a lot of fight in us, as Kirk displays.  And so, though he claims to be gentle, he actually imposes a form of slavery and servitude upon his population.  He demands it in his people, along with a blind faith and “vacant contentment.”

This world has pseudo-religious contentment zombies, too.  I like to call them “shiny happy Christians.”  On the surface, they’ve got it all together; they have joy, they are full of answers, and they insist on using strange parables and Bible verses out of context.  They’re never struggling with anything (maybe prayer, that one is acceptable), and if you have a problem they will tell you why it’s not a problem and how “the joy of the Lord should be your strength!”

I know all of this, because I used to be one.  I have done all of those things.  And I felt it wanting.

But the verse from Nehemiah doesn’t mean that we should walk around with a fake smile on our faces all the time.  It was a specific order for a specific feast that was thrown because the Israelites were suddenly given everything they had been praying for their whole lives.

No, we are not called to a blind faith or vacant contentment.  It’s okay to be sad; Jesus wept, for his own sorrow and the sorrow of others.  It’s okay to be frustrated and upset at injustice; Jesus certainly was (as any temple moneychangers would readily admit).  And it’s okay to doubt; Jesus can take it.  In fact, He’s the only one who can.

More than just tolerating, He welcomes humble, broken questions about who He is.  When his disciples asked him questions, they were legitimately curious, asking who He was and what His plans were (Matthew 17, Mark 10).  And so He rejoiced in their curiosity, replacing it with answers that gave them wonder and worship and joy.

God’s continuous admonitions to joy in the Bible are not a call to put a Joker smile on your face, or to skip and whistle on the way to church every week.  They’re a call to a deep, abiding joy that only comes from seeking Jesus.  Not seeking Him for answers, or seeking Him to destroy Him (or even to trick Him into destroying Himself), but seeking Him because He is the good and sweet lover of the universe.

And so my wish for you: “Joy to you; peace and tranquility.”  And doubt, confusion, frustration and sadness that leads to a greater knowledge of Jesus.

Thank you for reading Redeeming Culture! Come back tomorrow for more Trektember as we look at episode 22 of Star Trek: “A Taste of Armageddon”.