Star Trek celebrated its fiftieth anniversary this month. So, here on Redeeming Culture, we’re going to release a short review of every episode of Season One, one episode per day, all month long (and we’re officially over halfway done!); for each episode, we’re writing a 3-sentence recap, a 3-word review, and (as much as we can) answering the questions “What fears or hopes are conquered or realized?” and “How does this point to Jesus or to the way God made us?” 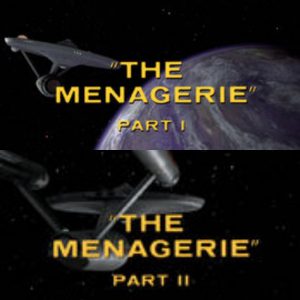 Spock seems to be going mad when he kidnaps his old captain, commandeers the Enterprise, and locks in a course for the only forbidden planet in the Federation.  As his court martial plays out en route, the story of Talos IV’s forbidden status is revealed.  The story is told through the adventures of of the only ship and captain to have ever explored Talos IV – the USS Enterprise, under command of Spock’s old captain, Christopher Pike.

The Talosians’ illusions are the key to this episode.  Pike faces a race that can create near-perfect illusions; he can’t trust the woman he’s with, the captors on the other side of the glass, or even the world around him.  He’s alone and enticed to believe whatever is around him, to live in the false world beyond.  No amount of rage or hatred can fully block it out, or protect him from the actions of beings who know exactly how best to coerce and trick him.

This is an illusion that we all can relate to, whether we know it or not.  This world, too, is a mirage; dreamed up by our captor so that we don’t see the reality underneath. We’re tempted to buy in, to give up on the world beyond what we can see.  We’re tempted to make this illusion the all-consuming goal of our lives.

But that way lies slavery, and we can’t escape it on our own.  We have no way out.  There is no clever way to reveal the seams in the illusion, no rage which can block out the temptation of our minds.  We must be rescued.

Years after his first mission to Talos IV, Pike is once again a prisoner; this time, it is not an illusion but his reality which is holding him in bondage.  His good friend Spock unswervingly races to his rescue, seeking to save his life and risking everything in the process.  More than risking, in fact; Spock knows that he faces the death penalty for his actions, and yet he lays down his life nonetheless to save the dying.

In the flashback, Dr. Boyce tells Pike that there are two kinds of customers: the living, and the dying.

So which one are you?

Thank you for reading Redeeming Culture! Come back tomorrow for more Trektember as we look at episode 16 of Star Trek: “Shore Leave”.