Today’s episode is number 12: The Conscience of the King. 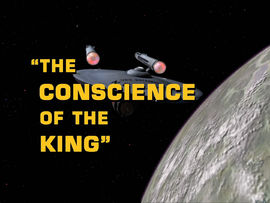 Captain Kirk is summoned to see a play by an old friend, who confides that he thinks the lead is actually Governor Kodos in disguise, a brutal bureaucrat who murdered 4,000 inhabitants of a colony that Kirk and the friend, Leighton, lived on as children.  Striking up a romantic friendship with the lead’s daughter, Kirk continues to investigate his claims, even as Leighton is killed and an attempt is made on Kevin Riley’s life (another witness to Kodos).  Before Kirk can make positively identify Kodos, Riley overhears the suspicion and seeks to take matters into his own hands.

“The Conscience of the King” is layered and fascinating, with a lot of worldbuilding involved.  Which makes it particularly interesting, as its status as science fiction isn’t particularly crucial in this episode; it could have been easily set on Earth with only minor changes to the story.

And at its core, that story is one of revenge.  Lenore’s revenge against the people who, in her mind, pose a threat to her father; Riley’s revenge against the man who sentenced his parents to death; Kirk’s forestalled revenge against a man who rattled his childhood.  But the fact that nobody ends up truly happy at the end of this episode should tell you a lot about the way revenge works out, in the end.

Revenge is such a common plot in all of fiction, and you’ve probably thought about it before.  But what’s interesting here is the anger that drives these three people.

Lenore is angry at those who would threaten her father, so she kills before they have a chance to.  Her anger is, of course, not righteous; it controls her, and she’s angry about something that hasn’t happened, and may not, to a man who committed great injustice and deserves trial; in the end it betrays her, causing her to kill the man she meant to save.

Riley is angry at the man who killed his parents, too, and when he discovers who Karidian truly is, he runs to take his revenge before learning whether or not it is true.  He waves off Kirk’s insistence that they must be certain of his identity before taking action, opting instead to attempt “street justice” against Kodos.  His anger, too, is not righteous, controlling him outside of his conscious wisdom.

Kirk, though, is an interesting case.  Though his anger is kindled against the man, his desire for revenge is outmatched by his desire for the truth.  He seeks justice, not death; justice for Kodos’ past victims and safety for any future ones.  But he will not allow his anger to control him.  Instead, he uses it to discover the truth.  His anger could be called righteous as it is slow and seeks the truth.

There are those who say that Christians should never be angry.  But a controlled anger that seeks justice and truth is very much the way God of the Bible is; and it may be true that if you’re not angry about injustice (whether in the form of abortion, racism, or any of the million other injustices), you aren’t paying enough attention.

That said, though, we must be careful not to be controlled by our anger.  It is a great asset, but it could be made to serve the Evil One.  Let your anger drive you to investigation – not retaliation.

Thank you for reading Redeeming Culture! Come back tomorrow for more Trektember as we look at episode 13 of Star Trek: “The Galileo Seven”.