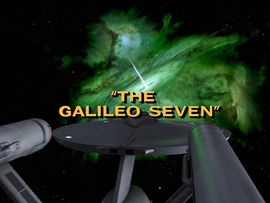 Seven members of the crew crash on a deserted planet in a communications-scrambling quasar formation, and three people have to stay behind for the shuttle to escape.  Spock takes command and displays poor people skills.  McCoy calls him on it.

Spock has always lived his life with hope and trust in logic as the ultimate arbiter of what he should do. But in his time of greatest need, at his first opportunity for solo command, all the faith he has placed in it fails him. It even costs him the lives of two of his crew, and the respect of the others. In the end, it is only when he abandons his failed worldview that he is able to save his life and the lives of his friends.

I cling to failed worldviews sometimes, and I’m sure that’s not something that I alone have felt. It’s only when I give up the weak and feeble and turn to an Eternally significant worldview that I am able to live.

And that’s something I struggle to remember, even now. Like, right now. While I’m writing this.

I pray that we will all be able to escape our quasar planets.

Thank you for reading Redeeming Culture! Come back tomorrow for more Trektember as we look at episode 14 of Star Trek: “Court Martial”.

Previous articleTrektember 2016 - #12: The Conscience of the King