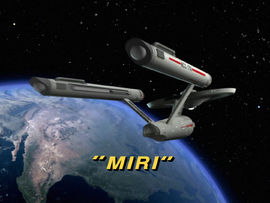 On a planet that looks exactly like Earth (a mystery which is never explained), Kirk and co. find a society of children who have lived for hundreds of years, and a plague that keeps them young for centuries – but kills them as soon as they reach adulthood.  They soon realize that the plague has infected them, too, threatening to kill them off as it does all adults on this world.  Can the crew keep a group of feral children at bay long enough to save themselves, and Miri, a local girl who is nearing adulthood?

Our culture has a lot to say about the special status children have.  And for good reason; the Bible welcomes children and insists that they are particularly beloved by God, and that the true believer in Christ must become like a child in their worship and desire for Jesus.

But this group of children have had their childhood destroyed by terrible things.  And they’ve had to live with that pain and that aborted childhood for many decades, becoming warped and twisted in their play.  Their true nature as sinners has begun to show through; they act as if they’re uneducated adults pretending to be children, not playing without care but without innocence, playing barbaric and violent games with real consequence.

And this all underscores the truth of what God says when He commands us to have faith like children, to become like babies before Him: the “Onlies” on Miri’s planet are not needy, they’re self-sufficient.  They’re not joyful, they’re flippant.  At times, even bloodthirsty.  It’s a grisly scene, and as humans, we don’t like it.

Our hearts see this as wrong because it is.  When Christ calls us to Himself, He wants us to come needy, seeking joy, and with empty hands to receive His blood to cleanse our sins.

Thank you for reading Redeeming Culture! Come back tomorrow for more Trektember as we look at episode 12 of Star Trek: “The Conscience of the King”.

Previous articleTrektember 2016 - #10: Dagger of the Mind

Next article 10 Most Anticipated Fall Movies of 2016