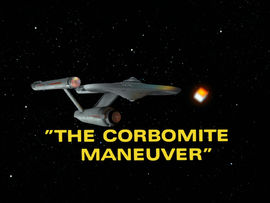 Previous articleTrektember 2016 - #1: Where No Man Has Gone Before

Haven’t seen this one in a while so I rewatched it because of your review. I thought I would pop in and leave a few comments of my own. Not trying to undo your excellent and brief review, just kind of thinking through it myself. Plus, I don’t have the constraint of cranking out one of these a day! 🙂

Balok says, “We make assumption you have a deity or deities or some such beliefs which comfort you. We therefore grant you ten Earth time periods known as minutes to make preparations.” Kind of irritating that the universal translator didn’t smooth out the “Earth time periods known as minutes” thing, but I guess that sounded alien back in the 60s. 🙂

Captain to crew….You know the greatest danger facing us is ourselves, an irrational fear of the unknown. But there’s no such thing as the unknown, only things temporarily hidden, temporarily not understood. In most cases we have found that intelligence capable of a civilization is capable of understanding peaceful gestures. Surely a lifeform advanced enough for space travel is advanced enough to eventually understand our motives. All decks stand by. Captain out.

So much in there. First, there is rank modernity: “no such thing as the unknown, only things temporarily hidden.” Brash belief that science will lead us to all truth. And his statement that “the greatest danger facing us is ourselves, an irrational fear of the unknown” is the application of that belief.

Second, Roddenberry’s unyielding optimism shines through. We’ve found that “intelligence capable of a civilization is capable of understanding peaceful gestures. Surely a lifeform advanced enough for space travel is advanced enough to eventually understand our motives.” If we’re nice, surely they’ll be nice back. Can’t speak for other species, but that, tragically, has not been the case here on Earth.

Third, Kirk blows past Balok’s offer to make peace with our deity or deities. He doesn’t ask the crew who believe in deity or deities to pray to them even if he does not. He assumes that Balok will be nice and that he can figure a way out of this. For Kirk, there is no need to resort to religion when his own reasoning will suffice. He thinks…

When his optimism proves futile and the countdown to destruction continues, Kirk begins to doubt:

KIRK: What’s the matter with them out there? They must know we mean them no harm.
SPOCK: They’re certainly aware by now that we’re totally incapable of it.
KIRK: There must be something to do, something I’ve overlooked.

Thanks for prompting some reflection on this episode! It was better than I remembered it. I’m looking forward to working through the rest of the episodes with you!

Wow, that’s an awesome addendum. Thanks for that!

I have to say, I often disregard overt mentions of religion or spirituality in stories as the “low-hanging fruit,” but this comment is a great example of how even the overt mentions of God or gods can be helpful in seeing what God has put into our hearts and how He has written His story into what we love.

Great comment. Thanks so much. Glad to have you along!

“…the assumed goodness of intelligence is a false hope” is very well said. Stephen Hawking has suggested that interplanetary communication is probably not a good idea even if it is possible, because it’s likely an advertisement to other life forms, “Hey! Food here! Food and stuff, protected by comparative weakness, come and get it!”

This has been called revolutionary thinking. Apparently it wasn’t credible until science himself said it.

“For the scientist who has lived by his faith in the power of reason, the story ends like a bad dream. He has scaled the mountain of ignorance; he is about to conquer the highest peak; as he pulls himself over the final rock, he is greeted by a band of theologians who have been sitting there for centuries.”
– Robert Jastrow