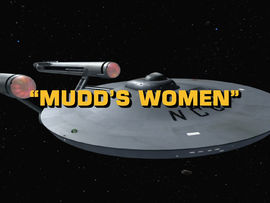 No matter how beautiful, skilled, erudite, strong, or powerful you are, someone is always more than you are. Impostor’s Syndrome is real, on that level; we’re all only a pale shade of what God is in each of those categories. But the beauty of the Gospel is that we’re made in His image; He places within each of us a reflection of who He is and a piece of the perfection that He represents. We have value, not from a drug that confers beauty, but from being His creations.

Thank you for reading Redeeming Culture! Come back tomorrow for more Trektember as we look at the fourth episode of Star Trek: “The Enemy Within.”

Sorry, but this one is a bit longer:

While “Mudd’s Women” feels misogynist to our 21st century sensibilities, in reality the entire episode reflects American expectations of women in the 1960s. Women’s Lib was dawning on TV with “That Girl” and would pick up steam when “The Mary Tyler Moore Show” debuted a few years later.

So don’t dismiss Star Trek too quickly. Though Eve, Ruth, and Magda are paraded around as objects, Uhura is part of the bridge. And don’t forget that in the pilot, Majel Barrett was the original Number One till the network said a women couldn’t even be second in command. Star Trek was not hopelessly misogynist, it existed on the cusp of social change toward women. It surely helped propel that change forward.

So what is Mudd’s Women about? Despite the women bearing the biblical names Eve, Ruth, and Magda (short for Magdalen as in Mary) what is actually presented is nothing less than the “Disney Gospel”: just believe in yourself. But this cautionary tale preaches the Disney Gospel with a surprise.

Often in Star Trek episodes the point is revealed at the end in a morality lecture by one of the characters. And such is the case with Mudd’s Women. What really makes Mudd’s “cargo” beautiful? Is it the Venus Drug or something more? In the end Eve delivers the morality lecture we’ve been waiting for even though she doesn’t fully understand the implications of what she’s saying:

You don’t want wives, you want this. This is what you want, Mister Childress. (She holds out the Venus Drug.) I hope you remember it and dream about it, because you can’t have it. It’s not real! (She takes the pills and transforms to her former beauty.) Is this the kind of wife you want, Ben? Not someone to help you, not a wife to cook and sew and cry and need, but this kind. Selfish, vain, useless. Is this what you really want? All right, then. Here it is.

What she’s demonstrated to Childress up to this point has been that she is functional around the house and a useful partner. And that’s what she thinks she has to offer because her beauty is fake, the drug gave it to her.

And this is where the “Disney Gospel” comes in. Kirk confides that the drug Eve just took was fake:

EVE: I swallowed it!
KIRK: Colored gelatin.
MUDD: Yes, they took away my drug and substituted that.
EVE: But that can’t be.
KIRK: There’s only one kind of woman.
MUDD: Or man, for that matter.
KIRK: You either believe in yourself, or you don’t.

Eve is nothing more than who she believe’s she is. Earlier, Mudd explained what the drug does, “It gives you more of whatever you have.” Eve has beauty that isn’t merely external. She is a strong woman. She can hold down the home while Childress mines lithium crystals. They can be a team who work together but first Childress needs to get past her looks to see her inner beauty. In the end, Eve needs to also.

And that’s the surprise that Disney never seems to get around to in their “gospel”; that sometimes even we don’t even know what makes ourselves truly beautiful.

So is there any redeeming theme here? Almost. Believe in yourself, for sure. But not because of your own worth but because you are created in God’s image. You don’t need a drug to amplify what you are to the point that others stand slack jawed in wonder. Humans have that in that we are “a little lower than the angles” and yet Jesus “emptied Himself, taking the form of a bond-servant, and being made in the likeness of men.” This is something God did not do for the angels. Eve makes the mistake of judging herself worthy not because of fake beauty but because of her ability to run a frontier home.

What none of that speaks to is what Eve, Ruth, and Magda were like before they met Harry Mudd and his glowing red pills. None of it answers what it was that the Venus Drug amplified in Eve that made her externally stunning. If what she had was a good work ethic, she should have been transformed into a work horse of a women. Instead, her real beauty is found in her place in creation.

As C.S. Lewis said in ‘The Weight of Glory’:

“It is a serious thing to live in a society of possible gods and goddesses, to remember that the dullest most uninteresting person you can talk to may one day be a creature which,if you saw it now, you would be strongly tempted to worship, or else a horror and a corruption such as you now meet, if at all, only in a nightmare.”

We are not yet what we shall be. Maybe the Venus Drug nudged Eve just a fraction closer to who she might be in the New Heavens and the New Earth.

Dang it! Posted this to the wrong episode some how! Can it get moved or should I just repost it correctly?

You are a rock star, sir!